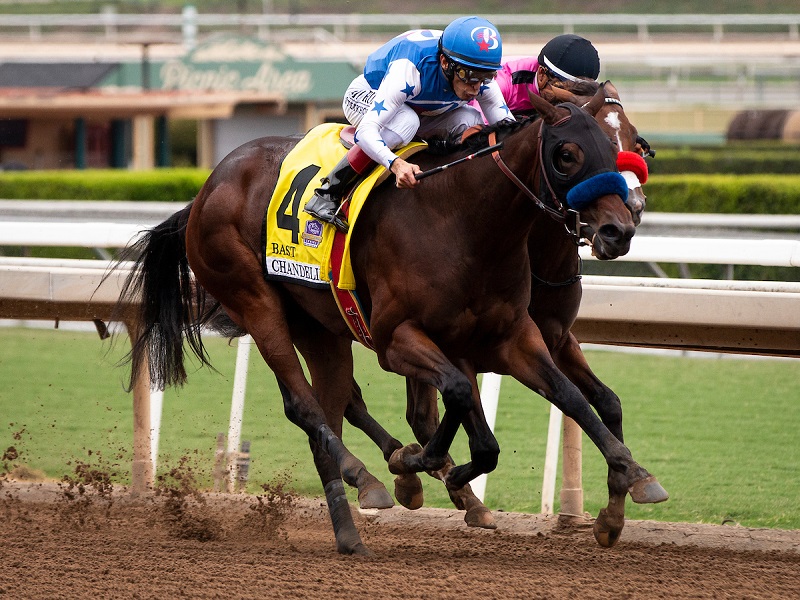 ARCADIA, Calif. (Sept. 27, 2019) — Racing as a team from the quarter pole home, heavily favored Bast, who was ridden by John Velazquez, inched clear late to prevail by a head over K P Dreamin and Abel Cedillo in Friday’s Grade I, $300,000 Chandelier Stakes at Santa Anita.  Trained by Bob Baffert, Bast got a mile and one sixteenth in 1:46.10.

A Breeders’ Cup “Win and You’re In” Challenge Race qualifier, Bast has a fees-paid berth into the $2 million Breeders’ Cup Juvenile Fillies, to be run on Nov. 1 at Santa Anita.

Attentive to the early pace set by Been Studying Her, Bast was three-deep to the immediate  outside of Comical around the far turn and prevailed in a thriller.

Owned by Baoma Corp, Bast, Kentucky-bred filly by Uncle Mo, out of the Indian Charlie mare Laffina, came off a rousing 8 ¾ length win in the Grade I Del Mar Debutante and now has two wins from three starts.

Leucothea, a 24-1 longshot ridden by Norberto Arroyo, Jr., broke from the outside and unseated Arroyo coming out of the gate.

JOHN VELAZQUEZ, BAST, WINNER: “This means a lot. (Jerry Bailey) is a guy who I rode with for so many years and have looked up to for so long. It’s incredible.”
“Going to the backstretch, she looked really good, and I was pretty confident. We got to the turn and I thought we might go a little wide, but I said ‘no, no – you have to stay there.’ I got up to her and she cruised down the lane and put her head out in front of the other horse. She gave me a lot today. I felt she gave me what she could to win the race.”

ABEL CEDILLO, COMICAL, SECOND: “I know the other horse was a tough one. I like my filly, though. I worked her last week and she worked really easy. She tried really hard today. She kept coming, but I think the better horse beat me.”

(On the future for K P Dreamin) “She’s most likely going to the Breeders’ Cup. Like I said, we can get a bigger field there. We can probably get a better pace to run at there, too”.

BOB BAFFERT, BAST, WINNER: Surrounded by media: “I’ve never seen so much press here on a Friday.” Asked about the stretch duel: “I thought, wow, man, she’s really going to have to fight for this, but if she’s a really good filly, like I think she is, she’ll get through it, and she got that last eighth of a mile. It just shows you how competitive these horses are.

“Both of them were fighting to win. She got there, and at 1-9, you want to win. There’s one down and I’ve got a few more to go.

“To be part of his (John Velazquez’s record 661st career graded stakes win, breaking the tie with Jerry Bailey’s 660) record is exciting, but Todd Pletcher is the one who got him all those graded wins. I played a very minor part. I really didn’t know he was up for the record until I read it the other day. That’s all I would have needed was a jinx like that to keep me from winning, because it’s always the last hurdle to get him over, but he’s such a professional.

“Down the backside she was going nice, then turning for home, John was like, ‘Come on baby, we’ve got to go,’ and she wasn’t going. He thought she would respond, but I think this will get her ready for the next one (Breeders’ Cup Juvenile Fillies Nov. 1 at Santa Anita).

“This is a very demanding, deep, heavy race track. Not only do you have to be really good, you have to be ready . . . The Chus (owners Charles and Susan) are really excited and we’ve been really lucky together, winning the Breeders’ Cup Sprint with Drefong, so they’ve already had a champion.

“They’ve been great supporters of mine. I really think this race is going to move Bast up, so I feel pretty good about it. You’re supposed to get tired first time two turns. They’re a little bit confused; they’re two-year-olds and they probably thought, ‘What are we doing?’ We have to go around again? We just started from there.’ But she got the job done. I had gone a little light on her (training ) so I just told John she’s not going to be as tight, but she’s 1-9 so I felt there’d be a little room for error, but there wasn’t much room at all.”