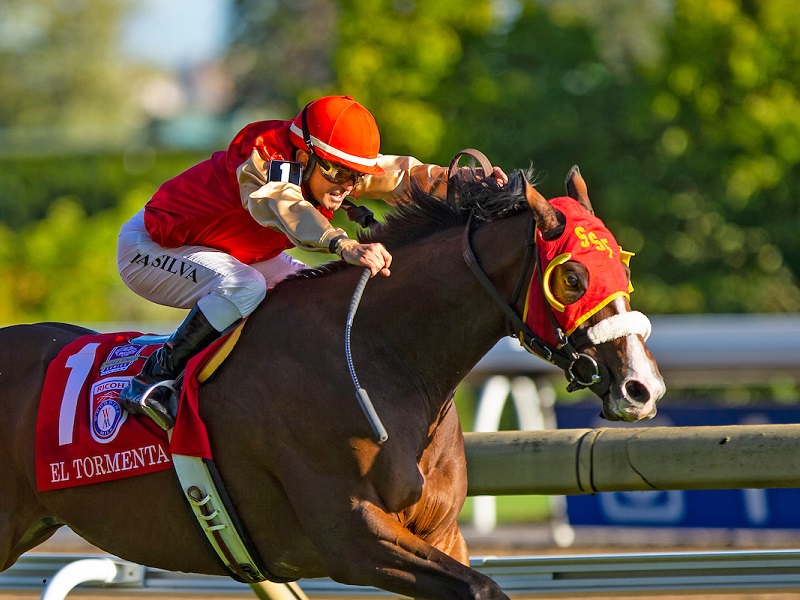 TORONTO, September 14, 2019 – El Tormenta, who had endured a string of troubled trips, found clear sailing under jockey Eurico Rosa Da Silva and rallied for a half-length victory at 44-1 in Saturday’s 23rd running of the $1 million Ricoh Woodbine Mile (Grade 1).

The Woodbine Mile is a Breeders’ Cup “Win and You’re In” race and earned El Tormenta a fees-paid berth in the Grade 1, $2 million Breeders’ Cup Mile at Santa Anita on November 3.

“This was my last opportunity to win this race – it was the only one left,” said Da Silva, who has announced that he will be retiring from the saddle at the end of this season.

“And this was my opportunity, and here we are. I was fully focused. It was a little tough with Pink Lloyd (declared a non-starter in the Grade 3 Bold Venture, earlier in the card) when he broke from the gate today, but I keep talking to myself, ‘Just focus on what you need to focus on, and keep faith in your horse. And never give up.’”

“This horse ran so beautifully,” added Da Silva, before closing with his signature phrase, “Good luck to everybody!”

El Tormenta, who had saved ground after breaking from the one-hole swung out for racing room in early stretch and closed resolutely to edge the 3-2 favourite Got Stormy, who was one of two fillies in the race.

Got Stormy, a four-year-old, performed nobly in defeat when looking to give trainer Mark Casse his third win in the last four runnings of the Woodbine Mile, following Tepin in 2016 and World Approval in 2017. Racing just off the early leaders, Got Stormy had hit the front when they reached the six-furlong mark in 1:08.33 and maintained a half-length lead with a furlong to run before coming up just short.

“I was proud of her,” said Casse. “I knew, this is a tough place to win. There is a huge home field advantage.

“I was just a little worried that they weren’t going to carry her far enough and that she’d make the lead. But the winner ran very well, showed a lot of guts down inside. I was proud of our filly. I’ve lost no respect for her and I feel extremely confident that we’ll be right there in the Breeders’ Cup.”

“Mark and I were just walking around the rail and it’s rock hard, it seems like it might be the best spot on the track,” said Gaffalione.

“The post position (No. 5) was good, we got a beautiful trip. She ran her heart out. She gave us everything she had. She’s an incredible filly.”

“I’m looking forward to her in the Breeders’ Cup. I think she’ll be dynamite out there. This track is a one-turn mile, it’s a long course. She has a lot of quickness to her and I think Santa Anita will fit her perfectly. She laid it all out there today. Congratulations to the winner, they ran a big race. It took a nice horse to beat her today.”

Got Stormy finished a half-length prior to Lucullan, who had started putting in his run with a quarter mile to go and ended third only to be disqualified and placed fourth for interfering with Raging Bull in the closing stages.

Raging Bull, the second choice at 3.80-1, had finished a half-length behind Lucullan and a half-length prior to fifth-place Synchrony, the third favorite at 3.90-1.

Emmaus, Admiralty Pier, Made You Look, Silent Poet, the filly Awesometank, and American Guru rounded out the order of finish.

Silent Poet had set a rapid pace of :22.84 and :44.43 while being pressed hard by Admiralty Pier and Awesometank.

El Tormenta was giving his trainer, Gail Cox, the biggest win of her career.

“I was a little worried with the one-hole and being on the rail because if you’ve seen his past three starts, they’ve been troubled. I just think he was laying closer and really bullied his way through a little bit. He’s a very, very nice horse, and was probably overlooked here.”

“Last year, I thought he was a sprinter. He ran shorter and he ran a different style. This year, every start, we thought he’d probably like to go a little farther.”

El Tormenta, a gelding by Stormy Atlantic out of Torreadora, had become a stakes winner when making his second start of 2019 in the Grade 2 Connaught Cup over seven furlongs of turf at Woodbine on June 1 but had encountered varying degrees of trouble in three subsequent stakes starts here.

The Woodbine Mile, raced over a turf course upgraded to “good” after being rated “yielding” earlier on the program, featured a swift pace. The front-runners were nowhere to be found at the finish. The final time was 1:32.60.

Michael Balaz, son of Sam-Son Farm president Rick Balaz and an integral part of the operation, said a decision will be pending on the winner’s Breeders’ Cup participation.

“I think that will be a decision that the higher-ups will have to make, and everyone will have to get together,” he said. “I don’t see why not after running like that.”

El Tormenta was the record third Woodbine Mile winner for owner/breeder Sam-Son Farm, who won the race with Quiet Resolve (via a disqualification) in 1999 and Soaring Free in 2004.