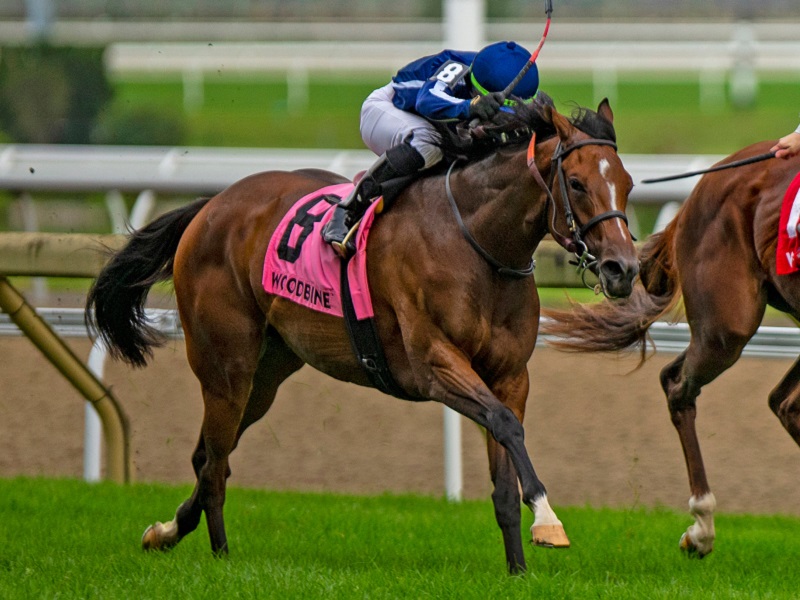 TORONTO, September 15, 2019 — Abscond, battling throughout on the outside, got the bob over a dead game Walk In Marrakesh in the final stride to prevail by a nose in a thrilling conclusion to the Grade 1, $250,000 Natalma Stakes on Sunday at Woodbine Racetrack.

Irad Ortiz Jr., completing a sweep of Sunday’s Grade 1 Breeders’ Cup “Win and You’re In” races for two-year-olds over one mile of turf after capturing the Summer Stakes two races earlier, punched the Eddie Kenneally-trained Abscond’s ticket to the Breeders’ Cup Juvenile Fillies Turf with her dramatic performance.

“And then by the time I start saving some ground in the turn and when I asked her to go, she’s a fighter. She fought with the outside horse and came back on the inside. She fought back and she put a head in front in the last couple of jumps. Everything worked out good for us.”

Abscond got the first call after breaking from the outside but was soon joined by Walk In Marrakesh. That Irish-bred filly Walk In Marrakesh, looking to become the third consecutive European invader to win the Natalma Stakes, ran too well to lose under Jamie Spencer, who had guided La Pelosa to win last year’s renewal.

Taking the express route on the inside, Walk In Marrakesh had raced up to join Abscond and held a fractional lead as they went the opening quarter in :23.99 and the half in :48.24 on a course rated “yielding.”

Walk In Marrakesh had opened up a length on her dogged pursuer as she reached the six furlongs in 1:12.56 but had to settle for second money when the teletimer stopped at 1:36.51.

“I knew it was really close, but I knew she won because I put the head in front in the last jump,” said Ortiz. “It’s always a challenge when you’re at the wire in that position.”

Fair Maiden, sent off at 3-5 on the strength of her 7 ½-length victory here in the 6-½ furlong Catch A Glimpse, raced within striking range throughout and looked to be in with a good chance to repeat as she rallied around the final turn. The Chicago-based invader battled hard down the lane only to tire slightly while racing erratically in the closing stages to be beaten just a nose and a neck for all the money.

Diamond Express, making her first start in North America and her first for trainer Mark Casse, loomed into contention as they straightened out for home but had to settle for fourth money, a length behind Fair Maiden and just a nose before stablemate Secret Stash.

Casse had Secret Stash in training at Keeneland but the Irish-bred, who like Diamond Sparkles was a private purchase overseas, was making her first start on this side of the pond.

Locally-based maidens Saratoga Vision and Runway Dreamer rounded out the order of finish.

Coach Lori, a third Casse entrant in the Natalma, was scratched.

Abscond, making her third career appearance but her first beyond 5 ½ furlongs, is owned by Apogee Bloodstock and Mike Anderson Racing LLC.

Based in her native state of Kentucky, the daughter of Blame had kicked off her career at Ellis Park with a maiden win and then a second-place finish in the listed Bolton Stakes at Saratoga, with both races over 5 ½ furlongs of turf. She had returned to Keeneland before shipping north and giving her trainer his first local victory.

“I’m really impressed with her,” said Wheeler. “She’s done everything right since she broke her maiden. Really, we’ve asked a lot of her shipping her up to Saratoga – she handled that great. So we shipped her up here, it looked like a good spot, and she came through.”

Wheeler added that it was too soon to say for sure that a Breeders’ Cup appearance would be in the cards.

“I guess it’s up to Eddie and the owner,” said the assistant. “She’ll tell us, how she comes out of the race. She’ll ship back to Kentucky and we’ll go from there.”