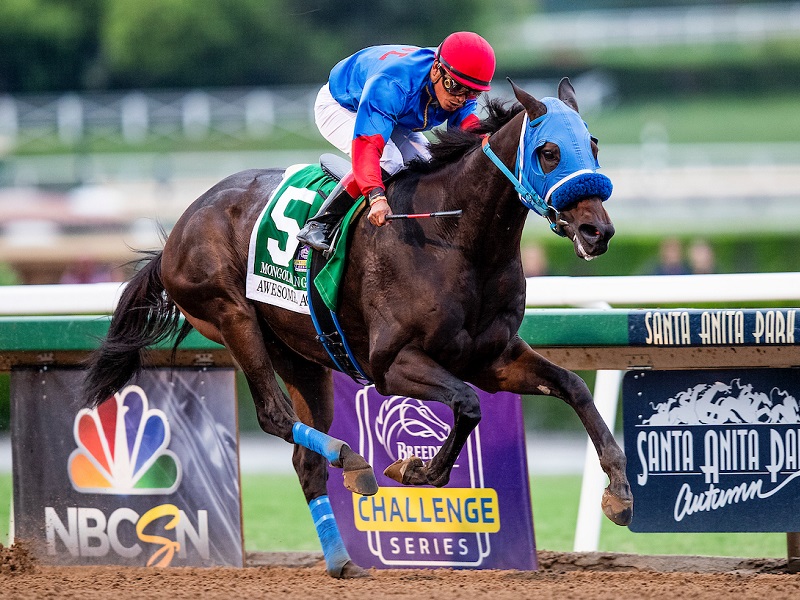 ARCADIA, Calif. (Sept. 28, 2019) — In the money in three graded stakes assignments this year but winless in his last seven starts, 25-1 longshot Mongolian Groom held a one length advantage over heavily favored McKinzie mid-way around the far turn and simply outran him through the lane to win Saturday’s Grade I, $300,000 Awesome Again Stakes by a widening 2 ¼ lengths Saturday at Santa Anita. With Abel Cedillo picking up his second graded stakes win of the day, both Cedillo and owner/trainer Enebish Ganbat registered their first Grade I wins at Santa Anita as Ganbat’s 4-year-old Kentucky-bred gelding by Hightail got a mile and one eighth in 1:49.27.

Ridden aggressively, Mongolian Groom went to the lead and was in control throughout. Pressured to his outside by longshot Isotherm up the backside, Mongolian Groom got some separation leaving the three furlong pole and although Mike Smith was trying to engage with McKinzie shortly thereafter, it was Mongolian Groom who was firmly in charge.

With the Awesome Again being a Breeders’ Cup “Win and You’re In” Challenge Race qualifier, Mongolian Groom would’ve earned a fees-paid berth into the $6 million Breeders’ Cup Classic on Nov. 2, but he is not Breeders’ Cup nominated and would therefore have to be supplemented by his owner.

ABEL CEDILLO, MONGOLIAN GROOM, WINNER: “I would like to thank the trainers and owners. I had a lot of help and thank you Enebish Ganbat, for trusting me. He told me don’t change anything, just do what you do with him . . . just stay close, and I saw McKinzie didn’t go so I took the lead.”

MIKE SMITH, McKINZIE, SECOND: “I thought I could go with the two outside horses, but they seemed like they were determined to get it. So I let them go figuring they’d entertain each other and we’d do what we do. That horse ran a huge race today. We lost the battle, but this ain’t the war. Hopefully we’ll come back and be ready.”

ENEBISH GANBAT, MONGOLIAN GROOM, WINNER: “Honestly, I didn’t expect he was going to win because he was running against two of the best horses on the dirt and the best two trainers, Baffert and Sadler. I told everyone I’m happy if he comes in third. I bet $500 on show.

“I guess last time (Pacific Classic on Aug. 17) he got tired because it was very hot, he was sweaty and we did a hard jog. Today we did a light jog; he was fresher today.

“I told the jockey to do what he had to and he did OK, the horse won at 25-1. That’s horse racing. I expected him to hold off McKinzie through the stretch (through interpreter Josie Goldberg). My horse was not stopping. He continued to go."

“I didn’t think he’d win. He was up against the two best horses in America in McKinzie and Higher Power. I thought I’d be happy if the horse finished third. I didn’t think my horse would win.”

Goldberg: “He (Ganbat) went to a university in Russia, and the Russian mentality is, ‘You fight to the end,’ and that’s what the horse did. He wasn’t going to stop until he won. He didn’t tell Abel anything, except, ‘You know your job.’”