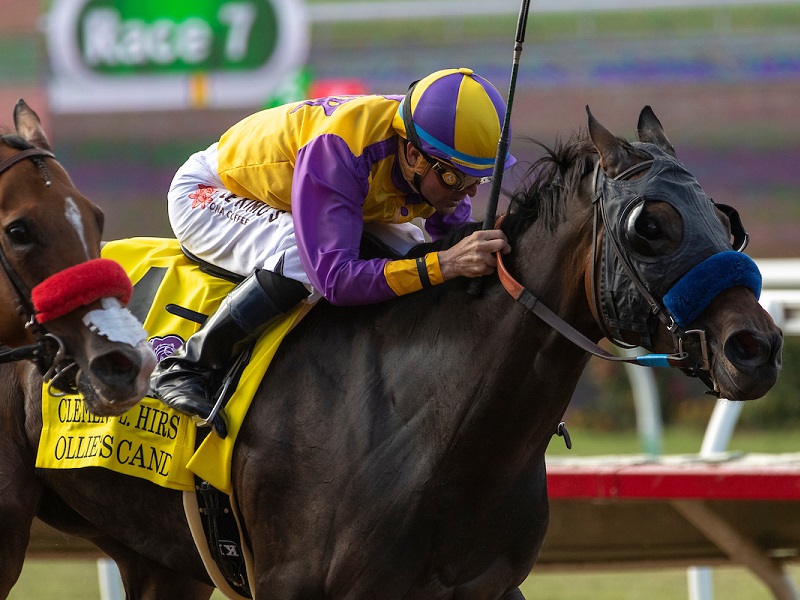 Battling back after being passed in the stretch, Paul and Karen Eggert’s Ollie’s Candy fought off 6-5 favored Secret Spice in a prolonged stretch duel to win the featured Grade I $300,000 Clement L. Hirsch Stakes Sunday at Del Mar.

Responding gamely to strong urging by jockey Kent Desormeaux, Ollie’s Candy outfinished Secret Spice in the closing yards to win by a head in 1:44.66 for the mile and one-sixteenth over the main track. La Force was third, five and one-quarter lengths behind Secret Spice and two and one-half lengths in front of fourth-place Paradise Woods, the 8-5 second choice.

Just a Smidge was withdrawn from the field of older fillies and mares.

With her victory, Ollie’s Candy earned a berth in the Breeders’ Cup Distaff in November at Santa Anita since the Clement L. Hirsch is a ‘Win and You’re In” qualifying race.

Recording riding doubles on the eight-race program were Drayden Van Dyke and Rafael Bejarano. Van Dyke won the opener aboard Immediate Impact, a two-year-old half-sister to former stakes star Arrogate, by six and three-quarter lengths, and also captured the third race on Major Cabbie. Bejarano’s winners were Wound Tight in the second and Desert Oasis in the eighth.

KENT DESORMEAUX (Ollie’s Candy, winner) – “I was just letting her do her thing; reins were dangling. At the quarter pole I picked her up and she did the rest. She came again (in the lane). That other mare (Secret Spice) got in front of us, but my mare is a fighter. She wants to win. John (trainer John Sadler) is on a roll. He just let me come along today.”

DRAYDEN VAN DYKE (La Force, third) – “She’s just so consistent. She always runs her race and always gets a piece every time. She is so good that way.”

MIKE SMITH (Paradise Woods, fourth) – “No excuses. I’m thinking maybe this track is too deep for a big mare like her.

JOHN SADLER  (Ollie’s Candy, winner) – “She is a really nice filly who ran in some big races here last year for Bill Morey, Jr. She came my way (two starts ago) in really good shape and I’ve just kind of carried on for what he did last year. She ran a good race her last start at Santa Anita, came down here and had a bullet work over the track, which showed me she had an affinity for the dirt. A lot of Candy Rides can run on any surface. You don’t give Kent (Desormeaux) any instructions. You just don’t. So I was surprised to see her in front, but it worked out.”