Got Stormy Beats the Boys to Win G1 Fourstardave at Saratoga 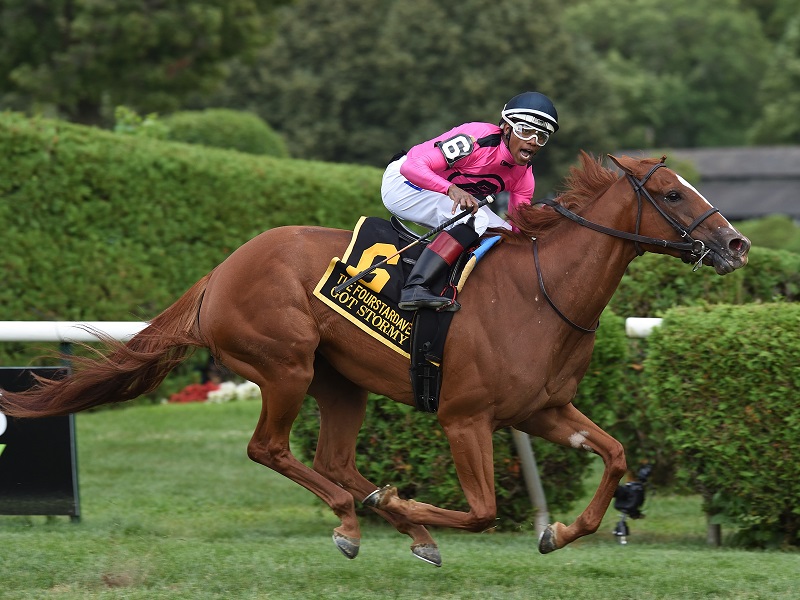 SARATOGA SPRINGS, N.Y. - Gary Barber and Southern Equine Stable's Got Stormy became the first filly to win the Grade 1, $500,000 Fourstardave, in its 35th running, covering one mile over the firm inner turf in a track record 1:32 flat on Saturday at Saratoga Race Course.

Trained by Mark Casse, Got Stormy was wheeled back just one week after her convincing win in last Saturday's Fasig-Tipton De La Rose and promptly earned a berth in the Breeders' Cup Mile on November 2 at Santa Anita Park with her lightning-quick effort in the Breeders' Cup Challenge Series race.

Got Stormy, sent to post at odds of 5-1 under Ricardo Santana, Jr., was one of two fillies looking to make history as the first female winner of the Fourstardave, along with the 9-5 post-time favorite Uni.

Gidu, leaving from outermost post 10, blasted to the lead under Manny Franco and set swift splits covering a quarter-mile in 22.52 seconds and the half-mile in 44.61 with Dr. Edgar, Made You Look, the slow-starting Ostilio and Got Stormy strung out in his wake.

Casse credited Barber for the ambitious entry and the filly, carrying 116 pounds with Santana, Jr. up for the first time in place of regular pilot Tyler Gaffalione, who was committed to stablemate March to the Arch, rewarded her connections with an inspired effort.

"One of the things I looked at was the weight. I knew the weight would help and Gidu opened up and it set it up. It was great," said Barber. "I told Mark I always wanted to run back in a week, and he said, 'No, let's take it easy and we'll have the Woodbine Mile in five weeks.' When she won so easy, I said we had to try this. She loves the course and she just turned in a dynamite performance. The only concern I had was that Tyler was gone, but with Ricardo, it was perfection."

Casse is no stranger to conditioning star turf fillies, having previously saddled multiple Eclipse Award-winner Tepin to a victory in the 2015 Breeders' Cup Mile, which was followed by a strong runner-up effort a year later.

The Canadian Hall of Fame conditioner said Got Stormy is a star on the rise.

"We came back and ran her a week later, which doesn't happen very often, but she's turned into a super filly," said Casse. "I was fortunate to train another filly a few years ago in Tepin, who won the Breeders' Cup and then was second. I told Gary early in the year that she was our next Tepin. It's nice sometimes when you're right. She's amazing."

Santana, Jr said he was confident throughout aboard Got Stormy.

"She's a monster," said Santana, Jr. "I had plenty of horse at the sixteenth pole. I wanted to make sure she opened up so when I passed first, I made sure she was on her game. She really ran a big race."

Raging Bull rallied to complete the exacta, a head in front of Uni with March to the Arch another head back in fourth. Rounding out the order of finish were Made You Look, Hembree, Dr. Edgar, Krampus, Gidu and Ostilio.

Got Stormy's final time of 1:32 flat eclipsed the previous mark of 1:33.13 set just eight days earlier by Macagone. Her sire, Get Stormy, won the Fourstardave in 2010.

The victory marked the second graded stakes win for Got Stormy, who previously captured the Grade 3 Ontario Colleen last July on the Woodbine turf.