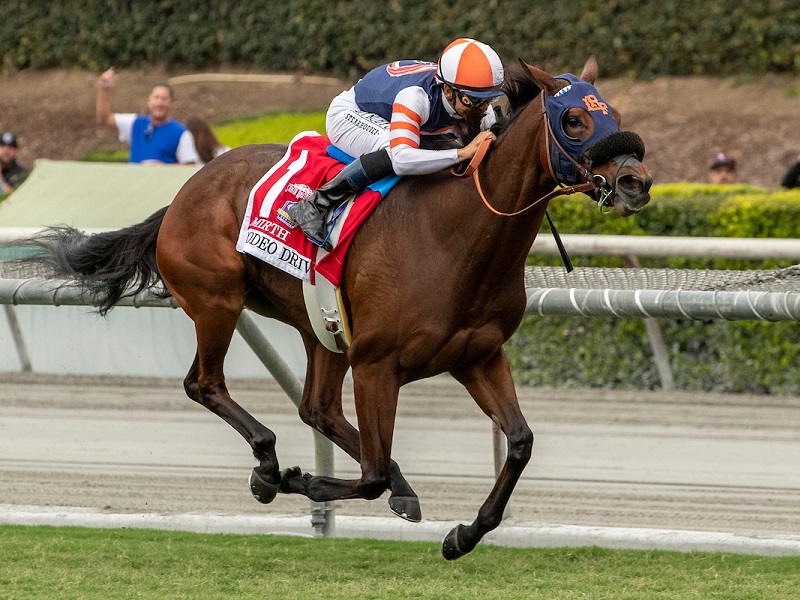 ARCADIA, Calif. (Sept. 28, 2019) — With legendary “Big Money” Mike Smith dealing the cards on the front end, 9-1 longshot Mirth registered an impressive 1 ¼ length victory in Saturday’s Grade I, $300,000 Rodeo Drive Stakes at Santa Anita.  Trained by Phil D’Amato, who won the Grade II John Henry Turf Championship earlier in the day, Mirth, a 4-year-old Pennsylvania-bred daughter of Colonel John, got a mile and one quarter on turf in 1:58.47.

Out of the French Deputy mare Di’s Delight, Mirth, who by virtue of her win today earns a fees-paid berth in the $2 million Breeders’ Cup Filly & Mare Turf on Nov. 2 at Santa Anita, picked up $180,000 for the win, increasing her earnings to $315,563.

Elysea’s World, who was unable to head the winner turning for home, finished 5 ¼ lengths in front of Siberian Iris and paid $2.40 to show.

MIKE SMITH MIRTH, WINNER: (On riding Mirth for the first time): “I’ve watched her, and she’s been running dynamite. It looked like she wasn’t far from pulling one of these off, so I knew it was in her. It was just a matter of whether I could get a little brave and start marching a little early. She doesn’t really have a turn of foot; she just seems to keep staying and keep going. I felt like I had gotten away with that at the half-mile pole, so going into the turn I started marching on where I was going to lengthen everybody’s kick instead of trying to make an explosive move. It worked today. It might not work next time, but it worked today.”

PHIL D’AMATO, MIRTH, WINNER: “She was kind of a late entry into the race. We were the lone speed and Mike (Smith) just kind of doled it out the right way and had plenty left.”

BILLY KOCH, LITTLE RED FEATHER RACING: “When she turned for home she kept going at the same pace and I didn’t see anybody coming . . . It was really great.”