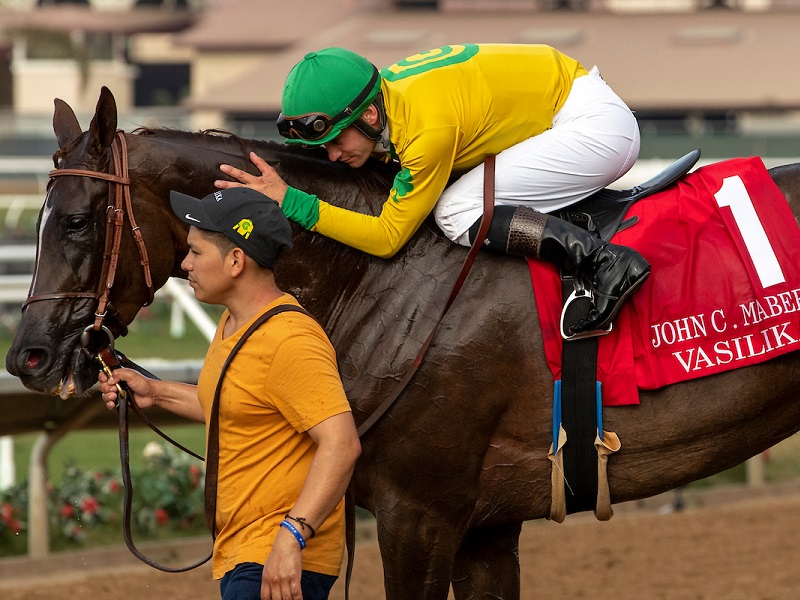 Even-money favored Vasilika, seemingly beaten in mid-stretch, unleashed a brilliant burst of speed in the final furlong to get up in the final stride and nose out Eastern invader Juliet Foxtrot in a thrilling renewal of the Grade II $200,000 John C. Mabee Stakes Saturday.

Vasilika, upset as the 9-10 choice when a close third in the Yellow Ribbon Handicap August 3, was outrun in the early stages while positioned in the middle of the pack, was taken to the outside for running room by regular rider Flavien Prat in upper stretch and responded explosively to win the Mabee Stakes for the second straight year.

Juliet Foxtrot, winner of the Modesty Handicap at Arlington Park in mid-July, appeared home free in the stretch after opening a clear lead for jockey Drayden Van Dyke, only to lose the closest of photos.

Toinette was third, a length and one-quarter behind Juliet Foxtrot, with longshot Paved fourth another length and one-half farther back in the field of ten older fillies and mares.

Vasilika, owned by the partnership of All Schlaich Stables and Gatto Racing  and trained by Hall of Famer Jerry Hollendorfer, was scoring her 18th victory in 34 career races and first money of $120,000 increased the five-year-old Skipshot mare’s earnings to $1,502,595. Since being claimed for $40,000 in February of 2018, the mare has won seven stakes.

FLAVIEN PRAT (Vasilika, winner) – “She put me in a good position today. Then she picked it up and started coming. (Third-place finisher Toinette) bothered me just a little in the stretch; she was drifting out. It almost cost me the race. When we hit the wire, I thought I’d won. But when I came back and saw the replay, I thought I was just headed back to the room.”

DRAYDEN VAN DYKE (Juliet Foxtrot, second) – “I just let her do her thing and she was rolling along. But the other mare (Vasilika) came to us outside, too far out for my horse to see. If she’d come in closer, it might have made a difference for my horse.”

RAFAEL BEJARANO (Toinette, third) – “We had a good trip today. We were right where we wanted to be. When we moved turning for home, I thought we were going to win it. But maybe it was just a little too far for her today.”

JERRY HOLLENDORFER (Vasilika, winner) – “When they came back (Flavien) Prat told me ‘She finds a way,’ and that’s true. He knows how to ride this filly and it looked like he felt comfortable the whole way. He didn’t get her jammed down on the rail where she couldn’t get out. He was out where he needed to be. I thought she was going to get there. It didn’t look as close to me as it was. I’d like to see the photo. Sometimes you get a horse like this and you’re just so grateful.”