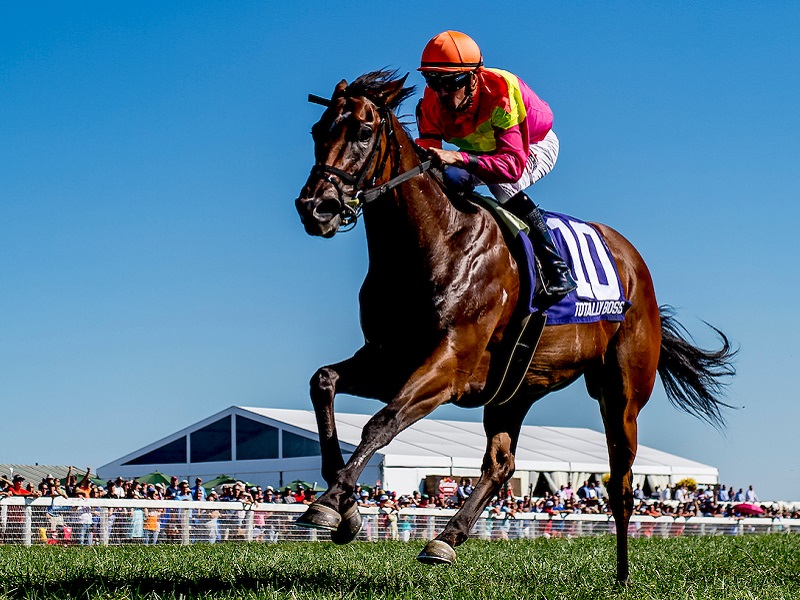 FRANKLIN, KY. (Saturday, Sept. 7, 2019) -- When Totally Boss first came into trainer Rusty Arnold’s barn last fall, he was a horse in need of a change in scenery and, most importantly, a dose of fire in his belly.

“(Trainer) Brian (Lynch) had him and he asked me to take him,” Arnold recalled. “Brian gave him to me because at the time he wasn’t winning on the dirt and he didn’t go anywhere on the dirt for me, but he ran well on the grass last year.”

Less than a year after settling in with his new surroundings, Totally Boss has indeed changed the narrative of his career. The one time underachieving gelding is now a graded stakes winner and Breeders’ Cup contender after running off to a 1 ¼-length victory over Smart Remark in the Grade 3, $700,000 RUNHAPPY Turf Sprint at Kentucky Downs on Saturday.

The six-furlong Turf Sprint was a “Win and You’re In” qualifier for the $1 Breeders’ Cup Turf Sprint (G1) and one of five stakes races – four of which were graded – on the Kentucky Downs lineup.

After finishing sixth beaten more than 30 lengths in the Allied Forces Stakes at Belmont Park last September – his sixth loss from his first eight starts – Totally Boss was sent to Arnold’s shedrow in hopes that the venerable horseman could somehow get the son of Street Boss to right the ship in terms of his form. His first two outings for the Kentucky-based conditioner resulted in two more defeats but after getting the winter off at owner Jim and Susan Hill’s Margaux Farm, the bay gelding returned as the best version of himself yet.

A victory in his seasonal bow at Keeneland in April was followed promptly by another win at Churchill Downs going 5 ½ furlongs on the grass. What really signaled to Arnold that he had something heady to work with, however, was when Totally Boss was beaten just a nose by multiple graded stakes-winner Om in an allowance race under the Twin Spires on June 29.

“We thought his race at Churchill showed he belonged, the race where he got beat,” Arnold said. “His first two were condition allowance races but when he got beat in that race, that was a good field. We thought at that point he was a good horse.

“Jim Hill picked the Ellis Park race after that. He said ‘I’m afraid if we go to New York, it may rain and things may go wrong.’ He said ‘Let’s go to Ellis’…and he barely got up there (for the win) but it was great because it got us in for this race.”

That trip to Ellis Park yielded a half-length victory in the Kentucky Downs Preview Turf Sprint Stakes on August 4, the first stakes win of his career. Facing a loaded field in the Saturday’s Turf Sprint that included champion Stormy Liberal, Totally Boss pressed early front-runner and eventual second-place finisher Smart Remark through fractions of 23.54 seconds for the opening quarter-mile and 46.66 for the half before edging past at the furlong marker to prevail in a final six-furlong time of 1:09.21 and give jockey Florent Geroux his first win of the day, and his fifth of the meet.

“He was loaded today,” Geroux said. “He broke sharp. Actually, to be honest, there was not a lot of speed in the race. When he broke sharp, I just took it from there. He put me closer to normal, but he was traveling great. And when I asked him turning for home, he gave me his usual kick. He’s a nice horse, and I think Rusty has him near the top of his form right now.”

Dismissed at odds of 69-1, Smart Remark held on for second to give Ellis Park the exacta of having the top two come off races at its track. Leinster, stablemate to Totally Boss and a half-brother to Stormy Liberal, checked in third, beaten 2 3/4 lengths and edging fourth-place finisher and 2-1 post-time favorite Imprimus by a nose.

“He’s a really nice horse. He’s always shown a lot of ability,” said Vicki Oliver, trainer of Smart Remark. “I was surprised he was on the lead to be truthful. But he actually loved the course and moved really well. I think 6, 6 ½ (furlongs) is a better distance than 5, 5 ½, which is a little too short for him.”

“He just turned into a good horse,” Arnold said, adding that Totally Boss would not have another race between his expected start in the Breeders’ Cup. “He’s been unfortunate not to win them all this year actually. Mr. Hill takes him back to his farm after every race (Margaux Farm), freshens him up and keeps him 2-3 weeks depending on how much space we have and then he sends him back to me and it works. They say he loves it there, they turn him out and he’s a happy horse and he has really, really trained well.”

Totally Boss was bred in Kentucky by Mike Pressley and was purchased by the Hills for $180,000 out of the 2016 Keeneland September Yearling Sale.

“Everybody was so high on him, and that’s when you think something is going to go wrong,” Jim Hill said. “He was so cool in the paddock. I had high expectations for sure in this race. He’s really turned it around, figured it out. He’s having a great time. He spends half the time at our farm, Margaux, the other half with Rusty at the track. That just seems to suit him perfectly. He gets stronger every race, so we’re happy.”