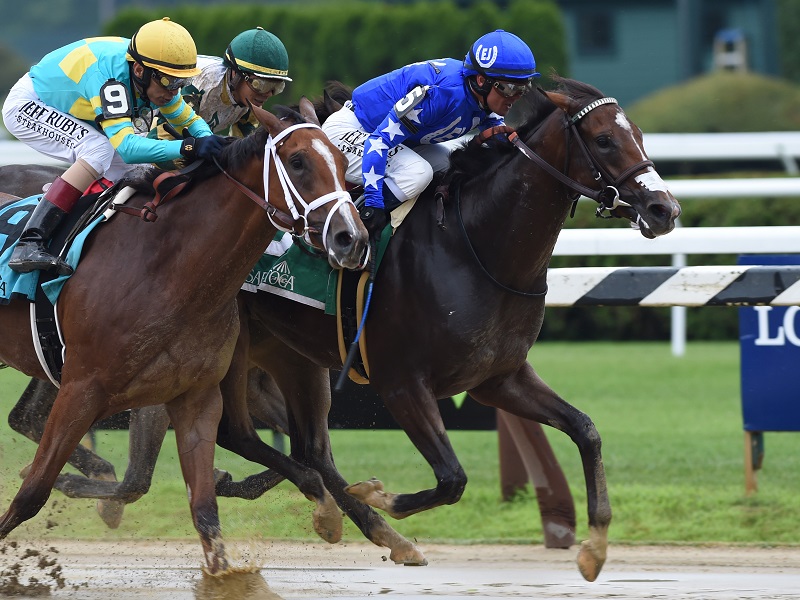 SARATOGA, N.Y. - ERJ Racing, Gary Barber, Dave Kenney and Madaket Stables' Comical captured the first stakes of the Saratoga meet in a thrilling dash to the finish to win the Grade 3, $150,000 Schuylerville on Opening Day Thursday.

Trained by Doug O'Neill, the Into Mischief bay arrived at the six-furlong sprint for juvenile fillies from a convincing six-length debut score on May 26 at Santa Anita Park.

Sent to post as the 3-1 second choice under Hall of Famer Javier Castellano, Comical stalked from second position as Integral sped through an opening quarter-mile in 22.54 seconds on the muddy and sealed main track.

Integral led the field to the turn as the half-mile was clocked in 46.24, with Comical pressuring from the outside while Shippy, the even-money mutuel favorite, waited for her cue from Jose Ortiz on the rail.

Comical surged to the lead as the field straightened away and angled to the rail to engage her advancing stablemate Shippy, but it was the wide-rallying Kiss the Girl, under Hall of Famer John Velazquez, providing the danger with a menacing move on the outside. All out to the finish, Comical prevailed by a neck in a final time of 1:11.66.

"She moved fast out of the gate and attended the pace and went forward," said Castellano. "Turning for home, I was able to save a little ground, and I'm very lucky she's a good enough filly to win the race, because the other horse was coming at her."

Kiss the Girl was a half-length the better of Shippy, with Buxom Beast a further 7 1/4-lengths in arrears in fourth. Integral, Lula's Roadrunner, His Glory and Lady Fatima completed the order of finish. Aurelia Garland was scratched.

Velazquez said Kiss the Girl, a 4 1/2-length maiden winner at Belmont Park last out, lost focus during the race.

"She ran in spots, but when they opened up a length and a half, she didn't know what to do. She was running and stopping," said Velazquez. "She was just green today. When she won at Belmont, she was right next to the other horse the whole way around. She was more focused than she was today."

Erik Johnson, a defenseman for the National Hockey League's Colorado Avalanche, is part owner of Comical under the nom de course ERJ Racing. The Bloomington, Minnesota native, who won the silver medal with Team USA at the 2010 Winter Olympics, was thrilled with the effort from the talented bay filly.

"It's an unbelievable feeling to win at Saratoga, and we're blessed. To get a win here means a lot," said Johnson. "They're special animals and they're a part of your family when they run at a racetrack. To get a win here feels absolutely amazing. Hopefully, I can win the Stanley Cup later next year and get a daily double."

Johnson said Comical, who is closely related to multiple Grade 1-winner and 2008 Travers winner Colonel John, could have the stamina to go further.

"We're excited to see what her future holds. Her dam [Kaycee Ace] is a full sister to Colonel John, so hopefully she can stretch out," said Johnson.