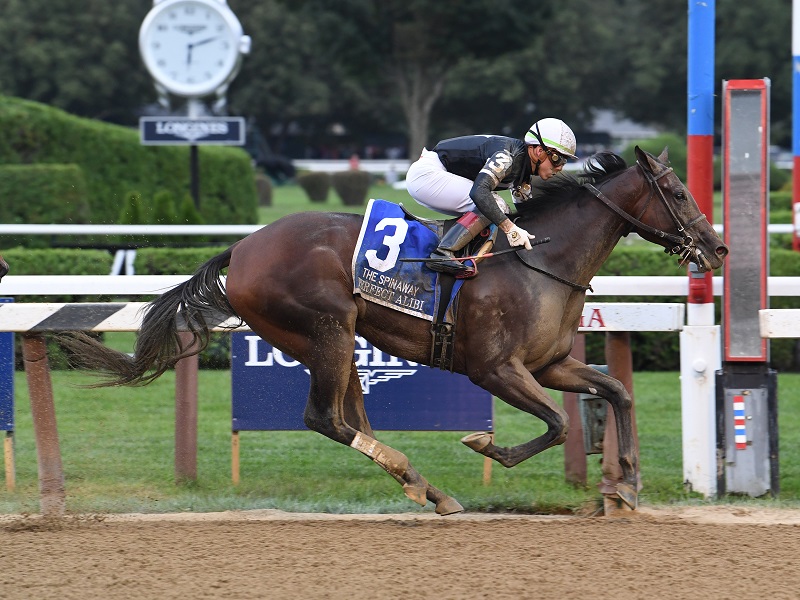 SARATOGA SPRINGS, N.Y. - Tracy Farmer's Perfect Alibi linked up with 9-5 favorite Frank's Rockette in the stretch and prevailed with a strong rail-riding push by jockey Irad Ortiz, Jr. to overtake her rival in the final sixteenth, clearing away by 1 ¼ lengths to win the 128th running of the Grade 1, $350,000 Spinaway for juvenile fillies on Sunday at Saratoga Race Course.

Before the draw, Perfect Alibi trainer Mark Casse said he preferred an off-the-pace trip akin to one she used to win the Grade 2 Adirondack on August 4. The Canadian Hall of Fame conditioner got his wish, with Perfect Alibi rating second-last as Mundaye Call led the seven-horse field through an opening quarter-mile in 22.65 seconds, with the half in 45.45 on the fast main track.

Jockey Julien Leparoux positioned Frank's Rockette to the front out of the turn, with Perfect Alibi moving strong to her inside past the eighth pole. In deep stretch, Perfect Alibi, under Ortiz, Jr.'s left-handed encouragement, got the better of her rival for a second straight start, completing seven furlongs in 1:23.44, mirroring the exacta in the 6 1/2-furlong Adirondack last month.

"She amazes me because she's just so laid back and doesn't get excited about anything. When the gate opens, she's tough," said Casse, who won the Spinaway for the second time after Pretty City Dancer dead-heated Sweet Loretta in 2016. "I wasn't sure if she was going to get through [on the rail]. I knew if she could just get her head in front, she would probably be fine. What a nice filly.

"This filly is just a fighter. She keeps coming," he added. "I think the farther she runs, the better she likes it."

Casse said a pair of Grade 1 races that serve as "Win and You're In" qualifiers to the Breeders' Cup Juvenile Fillies in November at Santa Anita Park remain a possibility for her next spot, including the $400,00 Frizette at one mile on October 6 at Belmont Park or the $400,000 Darley Alcibiades on October 4 at Keeneland.

Off at 5-1, Perfect Alibi returned $12.40 on a $2 win wager. The Sky Mesa filly improved to 3-1 in four career starts, with her only non-win coming with a second-place finish in the Astoria on June 6 at Belmont. Bred by Pin Oak Stud in Kentucky, she more than doubled her career earnings to $380,988.

"She has a lot of heart. She showed she had a lot of fight in her last time out as well," said Ortiz, Jr., who piloted Pretty City Dancer three years ago and also won the Spinaway with Lady Ivanka in 2017. "So, I wasn't afraid to make that tight space [along the rail] with her. I didn't have too many options and when I saw the space along the rail, I went for it."

Frank's Rockette, one of four Into Mischief fillies in the race, was five lengths clear of Figure of Speech for second. The trainee of Hall of Famer Bill Mott, who posted an 8 ¾-length win in her debut on June 21 at Churchill Downs, earned a pair of second-place graded stakes effort for the Saratoga meet.

"She ran a good race as planned," Leparoux said. "I think the distance might have got me today. Other than that, she ran a good race. It looks like, so far, she might want to go a little shorter. Maybe keep her at six, six and a half [furlongs]. She can do seven [furlongs], but she got a little tired."