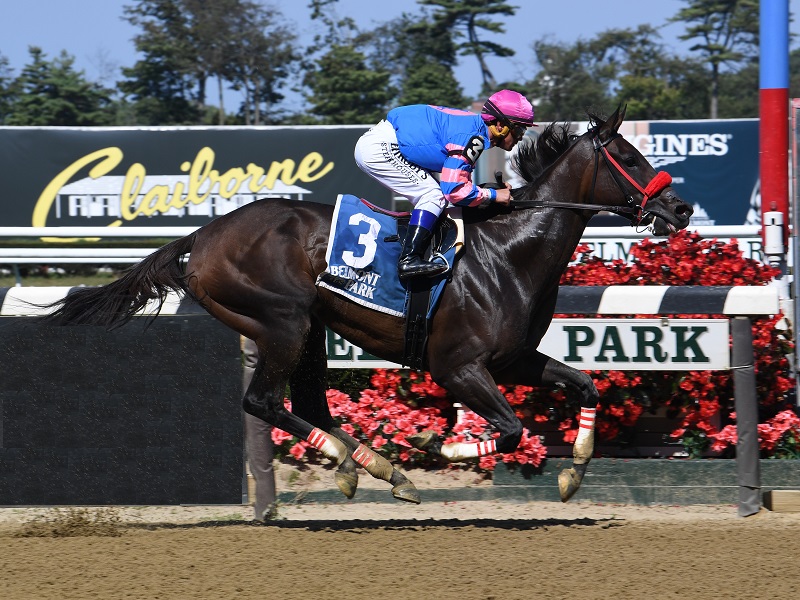 ELMONT, N.Y. - Sent off as the 1-5 post-time favorite, Blue Devil Racing Stable's Come Dancing didn't disappoint her backers earning her fourth win from five starts this year, capturing the Grade 2, $300,000 Gallant Bloom Handicap on Sunday at Belmont Park for fillies and mares over the main track.

Breaking form post 3 with Hall of Fame rider Javier Castellano aboard, Come Dancing stalked from third position as Carrera Cat and Minit to Stardom battled early with the former leading the field of five through fractions of 22.54 seconds for the opening quarter-mile with the half in 44.99 on the fast main track.

Racing three-wide at the quarter-pole, Come Dancing began to make her winning move past the pair in front. Come Dancing, in hand, extended away to the wire for a 3 ¼-length win, completing the 6 1/2 furlong distance in 1:14.96.

"My goal today was just to take it easy and put everything together for the Breeders' Cup," said Castellano. "I think this race is going to bridge the gap to the Breeders' Cup. I didn't want to squeeze the lemon. I wanted to win nice and easy, but I don't want to overdo it."

Returning $2.50 for a $2 win wager, the 5-year-old daughter of Malibu Moon homebred reached millionaire status with the victory, boosting her bankroll to $1,046,700.

Come Dancing was making her first start since winning the Grade 1 Ballerina on August 24 at Saratoga Race Course for conditioner Carlos Martin.

"I initially had said I was going to wait until the Breeders' Cup, but she was just doing so well," said Martin. "I did some research with the team and it was a perfect prep, timing-wise. The more I thought about it, the more I felt confident in running her today. Marc Holliday and the Blue Devil team have stuck with us through some tough times, and I'm glad to see her at her best as a 5-year-old."

Martin said this victory should set her up to next compete in the Grade 1, $1 million Breeders' Cup Filly and Mare Sprint on November 2 at Santa Anita Park.

"I was with my dad [trainer Jose Martin] when he trained Groovy. Unfortunately, we got beat as the favorite in the 1987 Breeders' Cup Sprint," added Martin. "Those are some bittersweet memories in California, so hopefully we can make it right after all those years and get a Breeders' Cup win for the family."

Following Minit to Stardom in second was Majestic Reason, Carrera Cat, and Jc's Shooting Star completing the order of finish.