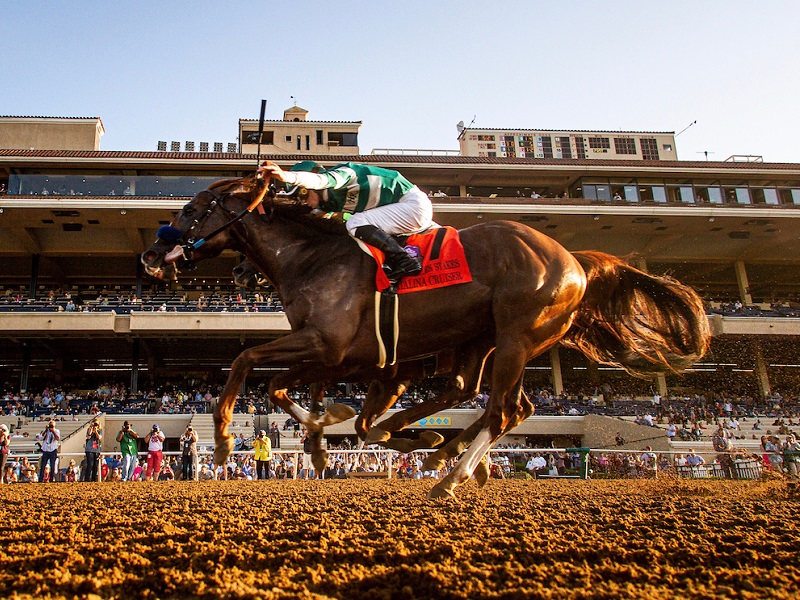 Hronis Racing’s Catalina Cruiser, the 1-2 favorite piloted for the first time by Flavien Prat, had to dig deep Saturday to fight off the tenacious challenge of Giant Expectations in an epic stretch battle and win the featured Grade II $200,000 Pat O’Brien Stakes.

Hooked at the top of the stretch and passed briefly in mid-stretch by Giant Expectations, Catalina Cruiser determinedly battled back to assert himself in the final strides and win by a desperate head.

American Anthem was a distant third, four and three-quarter lengths behind the runner-up and six and one-quarter lengths ahead of fourth-place Jalen Journey in the field of six horses. Lieutenant Dan was withdrawn.

Catalina Cruiser thus completed the San Diego Handicap-Pat O’Brien Stakes double for the second year in a row, an unprecedented feat at Del Mar.  He won the San Diego July 20. The five-year-old son of Union Rags also secured a spot in the Breeders’ Cup Dirt Mile for the second time since the Pat O’Brien is a “Win and You’re In” qualifier for that event in November at Santa Anita.

Catalina Cruiser, providing trainer John Sadler with his eighth stakes success of the Del Mar meeting, returned $3, $2.20 and $2.10 after his seventh win in eight starts. His only defeat came in the 2018 Breeders’ Cup Dirt Mile when he was sixth as the 9-10 favorite behind City of Light. First money of $120,000 increased Catalina Cruiser’s earnings to $691,100.

Giant Expectations, who was ridden by Drayden Van Dyke, won the O’Brien in 2017 and his game performance Saturday signaled a return to his best form. Sent postward as second choice at 7-2, Giant Expectations paid $3.40 and $2.80, while American Anthem returned $2.60 to show.

FLAVIEN PRAT (Catalina Cruiser, winner) – “We were wide (through the first four furlongs), but I was comfortable. He was going easy. At the quarter pole, Giant Expectations made a good move to get by me. He was in front but my horse fought back. He accelerated and ran well to win.”

DRAYDEN VAN DYKE (Giant Expectations, second) – “He made the lead (in the stretch). We were a head in front. He ran great. Tough loss.”

RAFAEL BEJARANO (American Anthem, third) -- “My horse broke good and I was in a good position. He ran well, but the two best horses beat me today.”

JOHN SADLER (Catalina Cruiser, winner) – “I think he ran a really good Beyer, a really good Ragozin figure. That’s a fast race, I could tell, on this track. He was wide all the way, was involved in the running all the way, so I was really pleased. He’s a big horse and he’s got a big heart; I really thought that (when headed in the stretch) he would fight.”