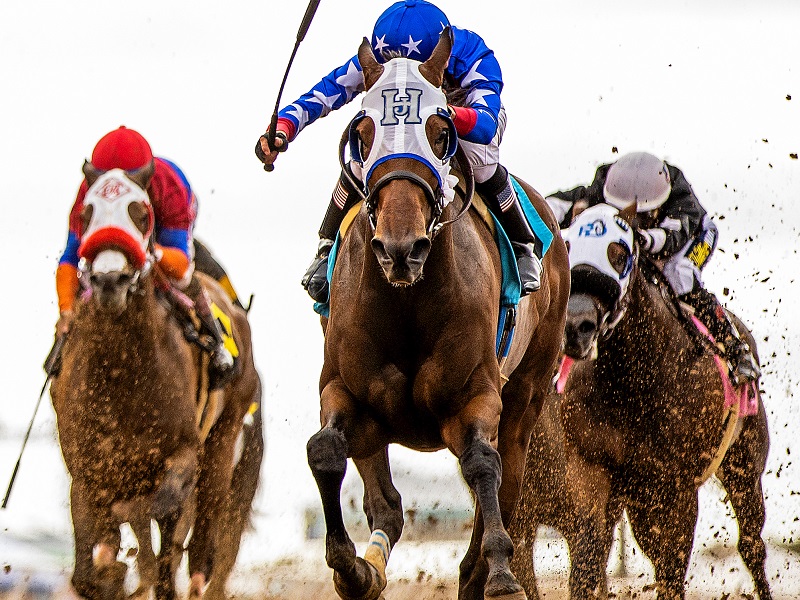 Danuska’s My Girl darted to the lead leaving the gate under jockey Geovanni Franco and led all the way to win the featured Grade III $100,000 Rancho Bernardo Handicap Sunday at Del Mar.

For the second year in a row, Anonymity finished second in the six and one-half furlong sprint for older fillies and mares. A year ago, she was runner-up to Yuvetsi as the 2-5 favorite and Sunday she again was second at short odds, 3-5.

Danuska’s My Girl, sent to the gate at 6-1, was game to the wire, defeating Anonymity by a half-length in 1:17.13. Two and three-quarters of a length farther back in third was Lady Ninja, who broke poorly, with Best of Me fourth in the field of nine runners.

Danuska’s My Girl, a five-year-old mare by Shackleford, is owned by Bad Boy Racing, nom de course of Kelly Mitchell of Plano, Texas and trained by Hall of Famer Jerry Hollendorfer. She was a two-time stakes winner at Santa Anita this spring before finished fourth in the Great Lady M at Los Alamitos July 6.

GEOVANNI FRANCO (Danuska’s My Girl, winner) – “Congratulations to the owners and to trainer Jerry Hollendorfer. She felt great all the way. She broke so sharp and then she slowed it down for me that second quarter. I knew someone was coming late (favorite Anonymity), but it didn’t matter. I kept riding as hard as I could. She likes it here at Del Mar. So do I.”

FLAVIEN PRAT (Anonymity, second) – “She stumbled coming away from there and that always affects you. But after that she ran a very good race.”

RAFAEL BEJARANO (Best of Me, fourth) – “Good trip for me. I was right where I wanted to be. I thought I might have something late, but…..”

JERRY HOLLENDORFER (Danuska’s My Girl, winner) – “It has been a long time coming but we finally got one. I’m doing the best I can and at least some things are working out, like winning this race for Kelly Mitchell. It feels good. In the race we thought we’d get a little more pressure from the eight horse (Best of Me) but we broke so fluid that it wasn’t that bad. He (Geovanni Franco) actually won the race in the second quarter when he got to slow it down a little bit.”