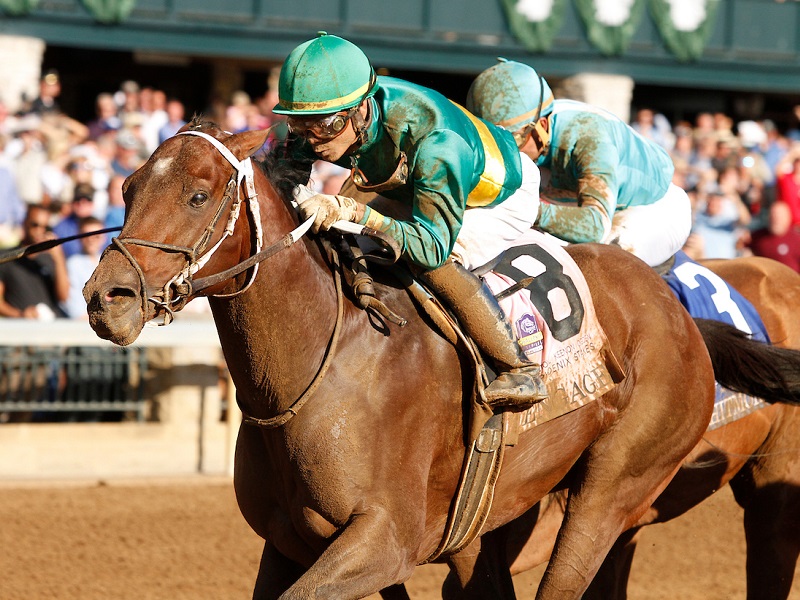 In the Stoll Keenon Ogden Phoenix, 2018 winner and favored Promises Fulfilled was first out of the gate, with Zipp On By applying pressure through fractions of :22.22 and :45.43 as Engage raced in mid pack.

At the head of the lane, the pacesetters began to wilt as Engage, swinging six wide, steadily moved toward the front and had enough to hold off Whitmore, who had bobbled at the start and spotted the field nearly 10 lengths in the early running.

Trained by Steve Asmussen and ridden by Jose Ortiz, Engage covered the 6 furlongs in 1:10.21 over a fast main track. It is the first victory in the race for Asmussen and Ortiz

Engage is a 4-year-old Kentucky-bred son of Into Mischief out of the Speightstown mare Nefertiti.

It was another three-quarters of a length back to Recruiting Ready with Hog Creek Hustle, Promises Fulfilled, Zipp On By, Cove Blue and American Pastime completing the order of finish.

“We’re very pleased with the outcome. It’s great to see this horse dig in. Quality field, rush to the wire and he found enough. He’s always been a quality horse. Belmont Futurity (G3) winner as a 2-year-old, fresh horse, very sound horse. Loved the opportunity for him. We felt good about our chances when we saw him over the race track here at Keeneland. This is a big win.”

“He’s a very game horse. I know him very well and I appreciate the opportunity they gave me to ride him back. (The race unfolded) very good. I was expecting an honest pace, but they weren’t going that fast so I was able to lay close. The last sixteenth, he felt some horses coming – he pins his ears back and keeps going.”

“He was very comfortable where he was, then when he made that run I thought for a second we were going to get there. Good effort.”

“I think the (slightly slow) pace might have affected him a little. He has not run in a while and I was glad to get him back in action. If the race had been a little faster earlier, then (leaving the gate) that far back would not have affected him at all. Breeders’ Cup is still a possibility.”

“I was (on) the underdog in the race, but it was his first time taking on elders and he showed his grit. That’s the way he likes to do it. He's a solid horse. He's just probably getting to the end of his 3-year-old campaign now. Things are going to get harder for him but he showed his all. True heart there. He ran huge.”

“(Jockey) Luis (Saez) said he was switching leads a couple times. I don’t know (what happened). We’ll figure it out. He said he thought he was traveling good early and that he had a lot of horse. I don’t know.”

On whether the Breeders’ Cup is still in play

“Oh yeah, we’ve got a Win and You’re in (from the John Nerud-G2). We’ll just have to figure something out over the next 30 days. Everything is still on the table (between the Sprint-G1 and Dirt Mile-G1).”