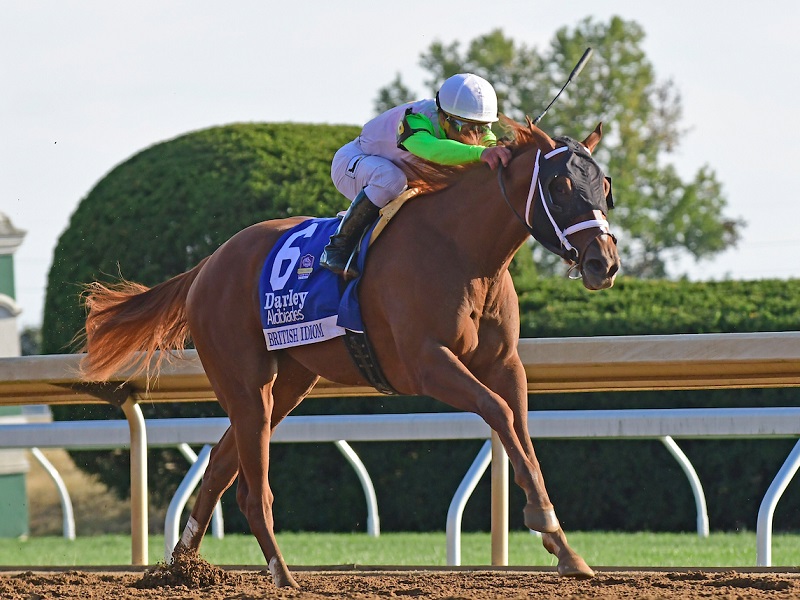 Michael Dubb, The Elkstone Group, Madaket Stables and Bethlehem Stables’ British Idiom swept to the lead at the head of the stretch and romped to a 6½-length victory to win the 68th running of the $400,000 Darley Alcibiades (G1) for 2-year-old fillies before a Fall Meet opening-day crowd of 16,427.

In the race prior to the Darley Alcibiades, Woodford Racing’s Engage held off a late charge from 2017 victor Whitmore to win the 167th running of the $250,000 Stoll Keenon Ogden Phoenix (G2).

Trained by Brad Cox and ridden by Javier Castellano, British Idiom covered the 1 1/16 miles over a fast track in 1:45.80. Cox and Castellano earned their first victory in the Darley Alcibiades.

A debut winner going 6 furlongs at Saratoga in August, British Idiom rated in fourth place as Spitefulness and Sequin dueled through early fractions of :23.73 and :47.27.

On the far turn, Sequin took over but was quickly joined and passed by British Idiom, who erased any doubt about the outcome. Perfect Alibi also made a big move on the turn from fifth to take over second but was no threat to the winner.

The victory was worth $240,000 and increased British Idiom’s earnings to $281,250 with a record of 2-2-0-0. British Idiom is a Kentucky-bred daughter of Flashback out of the Mr. Sekiguchi mare Rose and Shine.

It was another three lengths back to Gone Glimmering, who was followed in order by Sequin, Three D Flag, Spitefulness, How Ironic, Micheline, Western Taffy and Heir of Light.

On what gave him the confidence to start the filly, a winner of her only start, in a Grade 1 race

“We were pointing for the Pocahontas (G2) at Churchill, but the week before she came down with a little bug. Nothing major, but (I) just wasn’t happy with her bloodwork so we gave her a little time. She’s a real laid-back filly. She’s a really nice filly that’s full of class. She never gets worked up. She does whatever you want in the mornings. She’s a good-sized filly, too, and obviously capable of getting around two turns. As long as she comes out of this in good shape, we’ll look at California (and the Breeders’ Cup Juvenile Fillies-G1).”

“I think good horses can do that. She broke good and got good position. She pulled a little bit, but I liked the way she did it on the backside. She relaxed, kept tracking the horses, and I liked the way she finished. She’s a good filly. She’s improved and stepped up in class. Credit to Mr. Brad (Cox) on the way he trained her. Made me look good today.”

“Perfect, clean trip, just second best. I was following Javier (Castellano on the winner) but he was still in a good position passing the three-eighths pole and I was already asking my filly to go. It took her a while to get going but when she did I wasn’t able to keep up with the winner.”

“She ran well for her first time going two turns. I think she earned a (chance) in the Breeders’ Cup (Juvenile Fillies). She sure didn’t embarrass us today.”

“She broke a little slow. This is her first time going two turns and only her second start. She came running. She put in a good effort.”

“She felt fantastic, she traveled beautifully. She’s learning, she’s figuring it out. She’s still a little immature but she’s very willing. She wants to do right for you. It just takes her a couple of extra steps to realize it’s OK to settle.”