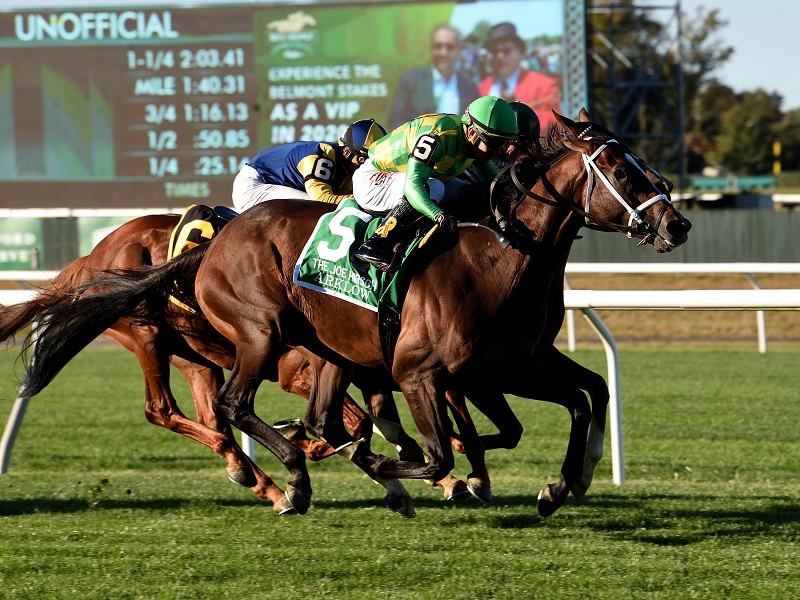 ELMONT, N.Y. -  The headline event of the two-day Joe Hirsch Turf Classic Festival did not disappoint as three horses crossed the wire together in a thrilling finish in the Grade 1, $500,000 Joe Hirsch on Saturday at Belmont Park, with trainer Brad Cox's Arklow coming out on top over last year's winner Channel Maker and Sadler's Joy.

Breaking from outermost post 7 under Hall of Famer John Velazquez, it was Channel Maker who showed the way early through comfortable splits of 25.14 seconds for the opening quarter-mile and 50.85 for the half. Typically a deep closer, Sadler's Joy found himself in second in the early going perched just to the outside of Channel Maker, while Arklow, after breaking near the back of the pack beneath Junior Alvarado, moved up to sit in third just off Sadler's Joy's flank. The leading triumvirate continued to amble along down the backstretch through three-quarters in 1:16.13 and a mile in 1:40.31, before the running began in earnest around the far turn.

Arklow was the first to press the issue, launching a menacing bid on the outside heading into the stretch, but Channel Maker was unwavering on the lead and Sadler's Joy dug in determinedly between horses. The three were inseparable for nearly the length of the Belmont stretch until finally Arklow surged by in the final sixteenth and inched away to prevail by a half-length, stopping the clock in 2:27.34.

"Every race, I try to do my homework and sometimes you just have to go with how the race is developing," said Alvarado. "One thing I was sure of was that I didn't want to get in his way. I wanted to save ground since it's a mile and a half race. Coming by the wire at the first turn, I knew we were going a little slow. I didn't want to go in behind those horses and then never be able to catch the frontrunner, so I just lost a little ground into the first turn but I never got in his way. I let him find his rhythm and he was there for me the whole way around."

The victory was a long time coming for Arklow, who was winless in 2019 despite near misses in the Grade 1 Man O' War and Grade 2 Belmont Gold Cup at Belmont. Prior to Saturday, the 5-year-old son of Arch's last win came more than a year ago in the Grade 3 Sycamore at Keeneland last September. He returned $10 to win and increased his career earnings to $1,776,382 for owners Donegal Racing, Joseph Bulger, and Peter Coneway.

"It's been a long journey to get there, but he finally got it done," said Cox's assistant, Dustin Dugas. "He's had enough seconds in a row. He's a cool horse. He's a hard knocker for all of us. It's fun.

"They had him right," Dugas added. "He shipped in from Kentucky. The guys in Kentucky did a great job with him. They had him on point and ready to run today."

Channel Maker, who won last year's edition of the Joe Hirsch over soft ground and bested Arklow by a neck earlier this year in the Man O' War, finished second, a neck in front of Sadler's Joy. It was another 1 ¾ lengths back to Channel Cat in fourth, followed by Cross Border, Zulu Alpha, and Ya Primo.