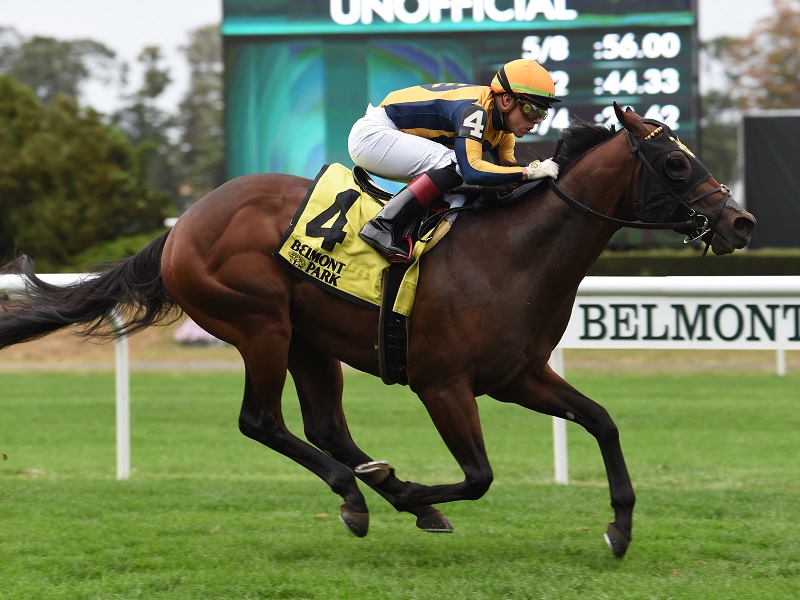 Breaking alertly from post 4 with Irad Ortiz, Jr. aboard, Four Wheel Drive grabbed an early lead before Jack and Noah shot to the front, setting swift fractions of 21.62 seconds for the opening quarter-mile with the half in 44.33.

Jack and Noah remained in front late in the turn with Four Wheel Drive sent under a drive shifting to the four-path to meet the leader at the top of the stretch. Securing the lead at the eighth-pole, Four Wheel Drive extended away to win by 3 lengths. He completed the six-furlong distance in a final time of 1:08.07 over a firm turf course.

"I worked him before this race and I put him behind horses. He always worked good like that and relaxed. When I asked him, he would take off like an older horse. He has a good mind," said Ortiz, Jr. "So [today], I didn't panic. I just let him break wherever he is comfortable and then go from there because I know he didn't have to be on the lead. He relaxed well and when I asked, he turned on."

Four Wheel Drive remains unbeaten in two career starts after successfully winning his debut in the Rosie's on August 31 at Colonial Downs. The Wesley Ward trained son of American Pharoah, bred in Kentucky by Glenvale Stud, returned $3.50 for a $2 win wager and boosted his career earnings to $142,500.

"Hopefully, he comes out of the race well," said Mike Hall, co-owner of Breeze Easy, LLC. "It will be our first Breeders' Cup starter. We had Shang Shang Shang last year, but he came up a little off the day of the race, so hopefully, this one makes the dream come true. The plan was for him to just sit chilly. Irad knew he had a lot of horse. He just made his move when he needed to."

Freewheeler closed for second followed by Embolden, Jack and Noah, Another Miracle, and Tomato Bill completing the order of finish.