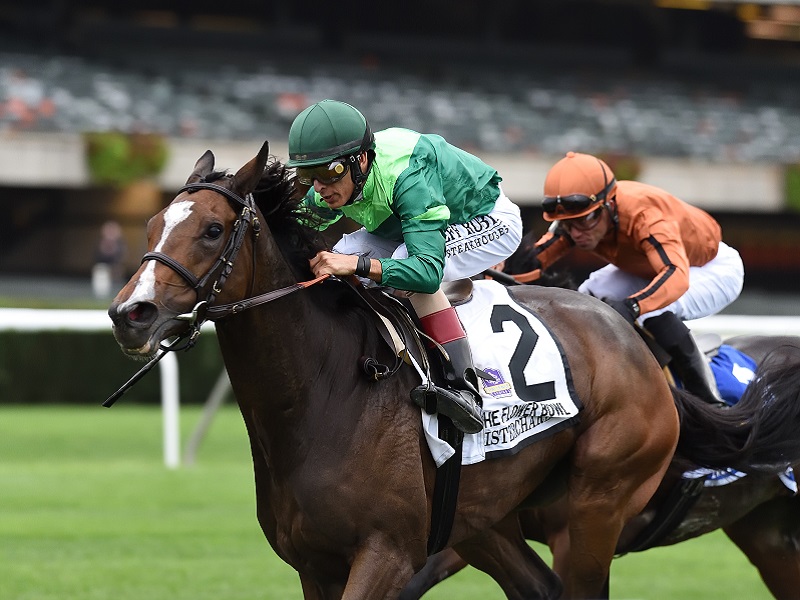 ELMONT, N.Y. - For the sixth consecutive time, Peter Brant's ultra-consistent Sistercharlie outclassed a Grade 1 field. The Chad Brown trainee stayed off the speed set by stablemate Thais, gained command in the stretch and fended off Mrs. Sippy's late challenge from the outside for a three-quarter length victory in Sunday's Grade 1 $500,000 Flower Bowl for fillies and mares 3-years-old and up at Belmont Park.

Sistercharlie's winning-streak extending effort in the Flower Bowl's 42nd running - one of three Breeders' Cup "Win and You're In" races on Sunday's 10-race docket - earned the Irish-bred Myboycharlie mare an all-fees paid trip to the Grade 1, $2 million Filly and Mare Turf on November 2 at Santa Anita Park, where she will look to repeat after winning the 2018 edition at Churchill Downs.

Off as the heavy 1-5 favorite, Sistercharlie, under Hall of Famer John Velazquez, settled in fourth position as the Brown-trained Thais opened up a large initial lead in the seven-horse field, going an opening quarter-mile in 24.21 seconds and the half in 49.17 on the firm inner turf.

Velazquez tipped Sistercharlie out slightly along the backstretch, moving her up to third with three-quarters going in 1:15.31. Out of the final turn, Sistercharlie was set down and overtook Thais from the outside. Velazquez urged her to the wire with the Graham Motion-trained Mrs. Sippy making a strong bid to her outside, but it wasn't enough as Sistercharlie completed 1 ¼ miles in a final time of 1:39.35.

Sistercharlie, who has finished off the board just once in 14 career starts, has not lost since running second to stablemate Fourstar Crook in the Grade 2 New York on June 8, 2018 at Belmont. Since then, the now 5-year-old has won a half-dozen Grade 1 starts at four different tracks [Belmont, Churchill, Arlington Park, Saratoga Race Course] and at four different distances ranging from 1 1/8 miles to 1 3/8 miles.

"We're very lucky to have her. She did everything she needed to do. She was 0-for-2 at Belmont going in. Even though it was only by short margins both times to two other of our nice horses, she was nevertheless winless here," said Brown, who saddled Fourstar Crook to a Flower Bowl win last year and has won the race five times in the last six runnings. "The case could be made that this isn't her favorite course, but she got the job done.

"We're pretty confident [in the Breeders' Cup] as long as she stays healthy," Brown added. "I don't think we've reached the bottom of her. Some of the setbacks that she's had have been a bit disappointing, but it's kept her fresh so it really goes both ways."

Sistercharlie returned $2.40 on a $2 win wager. She improved to 10-3-0 lifetime and increased her career bankroll to $3,482,003.
"She's been very good. She's done everything we've asked of her and I'm proud to be a part of it with Chad and Peter. She's incredible," said Velazquez, a now five-time Flower Bowl winner.

"I didn't feel like they were going very fast in front," he continued. "The two horses in front of me kept slowing down and obviously [Thais] just opened up. She was on the bridle and she's never on the bridle. I tried to leave her where she was comfortable and let her go from there."

Andrew Stone's Mrs. Sippy, fresh off a win in the Grade 2 Glens Falls on August 31 at Saratoga, finished 2 ½ lengths clear of Thais for second. It was the 4-year-old Blame filly's second North American start since arriving from England.

"She really put a nice run in at the end," said Mrs. Sippy jockey Joel Rosario. "I followed Sistercharlie the whole time and she dug in and came with a run, but Sistercharlie was just too strong. It was a nice race."

Completing the order of finish was Lantiz, Beau Belle, Ferdinanda and Empress of the Nile.