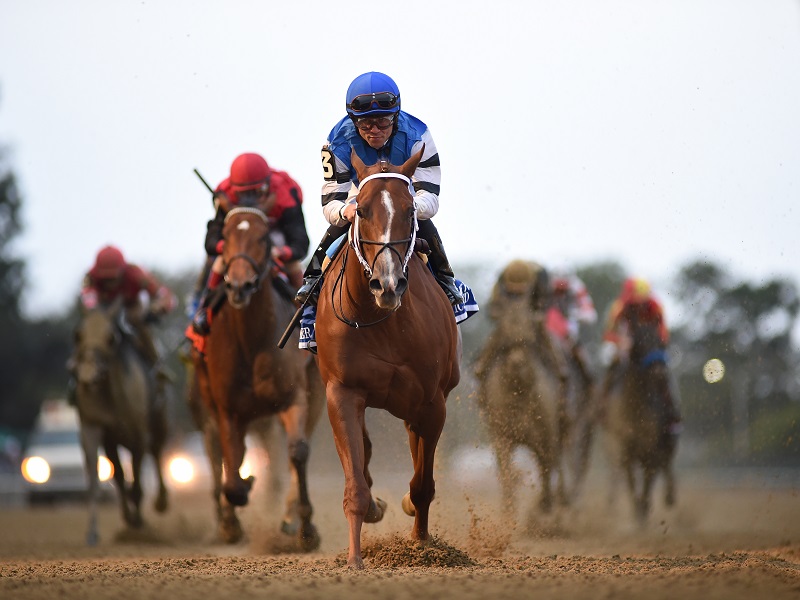 ELMONT, N.Y. - Alex and JoAnn Lieblong's Wicked Whisper remained undefeated with a convincing score in the 72nd running of the Grade 1, $400,000 Frizette on Sunday to close out the two-day Joe Hirsch Turf Classic Racing Festival at Belmont Park.

The one-turn mile for juvenile fillies offered an all-fees paid berth to the Grade 1, $2 million Breeder's Cup Juvenile Fillies on November 1 at Santa Anita Park. It also serves as New York's first prep race on the "Road to the Kentucky Oaks," with Wicked Whisper earning 10 qualifying points for the 2020 Grade 1 contest on May 1 at Churchill Downs.

Wicked Whisper broke sharply under Joel Rosario and set easy splits of 22.91 seconds and 46.49 for the half-mile on the main track rated fast. Miss Marissa pressed the pace in second with California shipper Quality Response in third and multiple graded-stakes placed Frank's Rockette, with Hall of Famer John Velazquez up, rating outside in fourth through the early stages.

Wicked Whisper traveled comfortably through the turn, opening up a 1 ½-length lead at the stretch call as Frank's Rockette made a wide move with Ice Princess and Slam Dunk following her lead.

Frank's Rockette rallied in vain down the lane but could not reel in a free-wheeling Wicked Whisper, who scored by 2 ¾-lengths in a final time of 1:35.92.

Rosario was full of praise for Wicked Whisper's bold effort.

"She relaxed good and was able to have a little extra in the last part," said Rosario. "There was a lot of speed. I was going to break and see; if someone went, maybe [I'd] lay second or third. She had nice cruising speed right away and I just decided to go on with her.

"Every time I asked her, she was there for me," he added. "It was her first time going a mile, so you just want something for the last part. She responded and just kept going. The more I asked, the more she was going. She looks like she's real spirited and looking around and enjoying herself."

Velazquez said he had a good trip with the hard-trying Frank's Rockette.

"She was real aggressive the first part of the race and I decided to stay there and lay fourth," said Velazquez. "I just sat there on the outside and made one run with her and she ran really well. The other horse just got the better of us."

Toby Sheets, assistant to Asmussen, said the team will take some time before deciding if they venture on to the Breeders Cup with Wicked Whisper.

"We're going to enjoy the moment and go from there and take it one step at a time," said Sheets. "She's a very nice and classy horse. She does everything correct. All I said to Joel was she's classy and 'good luck'

"I didn't have any concerns because they were going easy," he added. "That was very easy for her and she finished great."