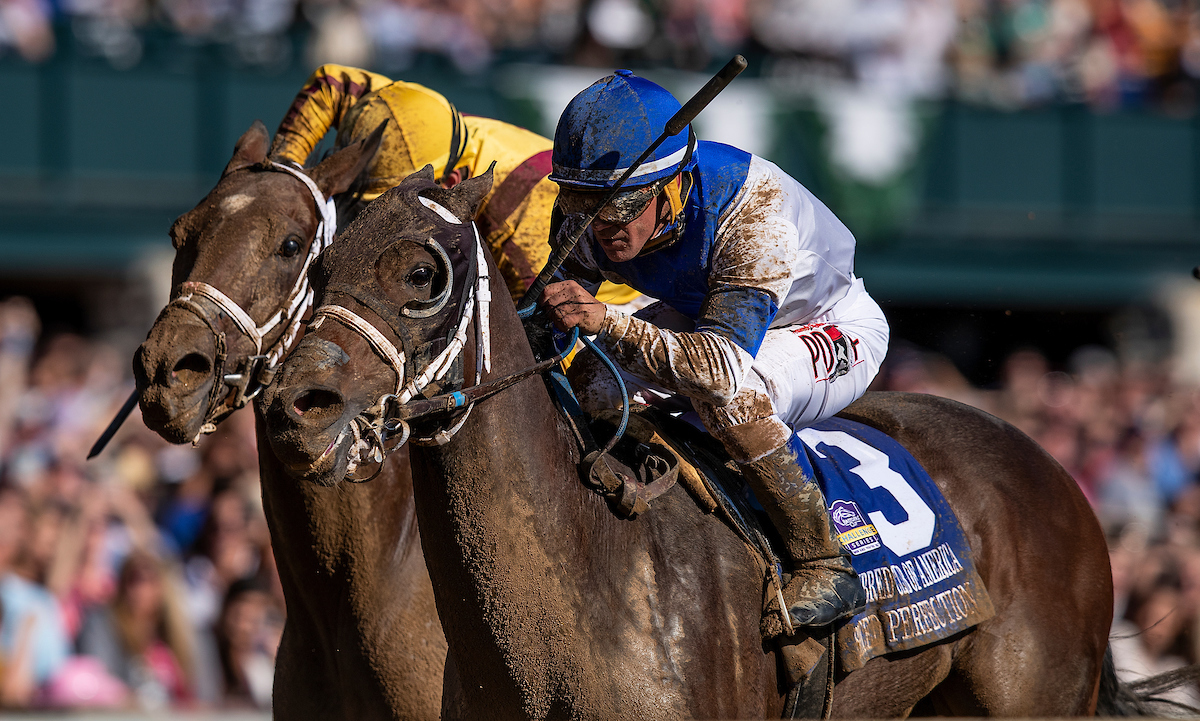 Spiced Perfection stumbled leaving the gate, worked her way into contention and then split leaders Mia Mischief and Talk Veuve to Me at the eighth pole to go on to a head victory over a late-closing Dawn the Destroyer in the 39th running of the $250,000 Thoroughbred Club of America (G2).

Spiced Perfection, who won the race in her first start since May 4, is cataloged to sell Nov. 6 at Keeneland’s November Breeding Stock Sale as a racing or broodmare prospect. She is consigned by ELiTE, agent.

Trained by Peter Miller and ridden by Javier Castellano, Spiced Perfection covered the 6 furlongs over a fast main track in 1:10.60. It is the first victory in the race for Miller and Castellano.

With the victory, Spiced Perfection earned a berth in the $1 million Breeders’ Cup Filly and Mare Sprint (G1) to be run at 7 furlongs on Nov. 2 at Santa Anita.

The victory was worth $150,000 and boosted Spiced Perfection’s earnings to $1,026,905 with a record of 18-8-5-2. It is the third Grade 1 victory for the 4-year-old California-bred daughter of Smiling Tiger out of the Pleasantly Perfect mare Perfect Feat.

Spiced Perfection joins Groupie Doll (2012) and Informed Decision (2009) as the only horses to sweep the Madison (G1) here in the spring and Thoroughbred Club of America in the same year.

It was another 1¾ lengths back to favored Chalon, who was followed in order by Ours to Run, Danuska’s My Girl, Talk Veuve to Me, Pretty Greeley and Razorback Lady.

“She stumbled really bad coming out of the gate. She recovered pretty quick and we kept tracking the speed. We got through a little, tiny hole at the eighth pole. The filly was very brave to go through that hole and get it done.”

“This horse has been great ever since she started racing. Eighteen races now, eight wins and she just never quits. (A secured spot in the starting gate of the Breeders’ Cup Filly and Mare Sprint-G1) sounds great. Sounds wonderful. I’ve never had one in the Breeders’ Cup.”

“It went to plan. There was a ton of speed in the race. We just let them go on about their business and let her find her stride. Coming into the 5/16ths pole, I just took her out and let her run. She really finished up strong. I thought we were going to get there but congratulations and props to the winner (Spiced Perfection). It went pretty quick, it was an honest pace.”

“I was in a good position, and then she tried running hard – just third best.”

“It looked like she was in a good spot, but she was not really traveling as well as she usually does. The track was a little deep. It never looked at any stage like she was traveling well.”

On whether Chalon will compete in the Breeders’ Cup World Championships

“Let’s see how she comes back. But it would be a little bit tough to go there off a race like that. She would have had to show something special today. We’ll probably regroup and pass on the Breeders’ Cup.”