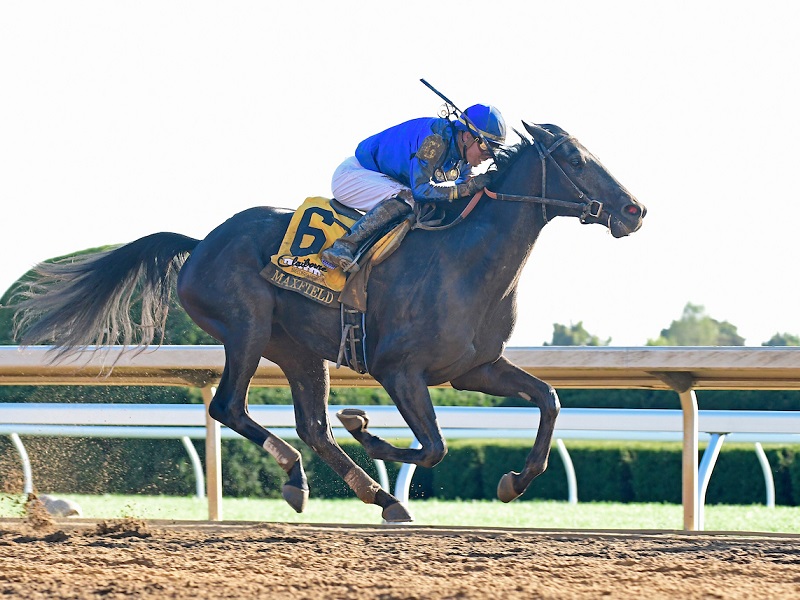 Maxfield, last in the field of 10 in the early going, exploded past favored Gouverneur Morris at the top of the stretch and cruised to a 5½-length victory in the 106th running of the $500,000 Claiborne Breeders’ Futurity (G1) for 2-year-olds.

American Butterfly led the field through fractions of :24.01 and :47.78 as Maxfield bided his time near the back of the pack. On the far turn, Gouverneur Morris blew past American Butterfly but Maxfield was behind him winding up with his run.

At the head of the lane, Maxfield surged past and quickly erased any doubt about the outcome.

Maxfield is a Kentucky-bred son of Street Sense out of the Bernardini mare Velvety.

It was another five lengths back to Ajaaweed with By Your Side, American Butterfly, January Won, King Theo, Life On the Road and Tap It to Win following in order.

“He’s a very special horse. I’ve been around a lot of good horses, and good horses breathe different air. I think this horse is right there. I thought he might take a run or two to break his maiden, but we knew he was a super-talented horse. He overcame a lot the first day we ran him (a maiden special win Sept. 14 at Churchill Downs), and he came out of that race doing so good. To come back in three weeks for a horse that’s only run once is a big ask, but he answers every question.

“Obviously, we’ll see how he comes out of this (before a decision on the Breeders’ Cup Juvenile-G1), but if you don’t bring him, who do you bring?

“I always knew (winning my first Grade 1 race) would be special but to win it here for these people (Godolphin) it’s extra special. Fantastic. Indescribable. “

“He’s a very nice horse and he’s very smart. He broke slow first time, took dirt and came running at Churchill. Today, he did the same thing. Broke a bit slow, relaxed and when I asked him to go, he was there for me the whole time.”

“It was a good trip. Unfortunately, we were kind of wide in the first turn, but that’s hard to deal with breaking from the outside post. He broke well enough to get into a good spot. We were just second best today. He earned it and fought for second place, but the winner was the best horse in the race.”

“I was going to save some ground on the first turn on the backside and I decided to tip him out by the three-eighths pole, but the winner (Maxfield) came by me pretty fast. My horse ran a great race to hang on for third. I was close for second place. He ran good. It was a good race for him.”