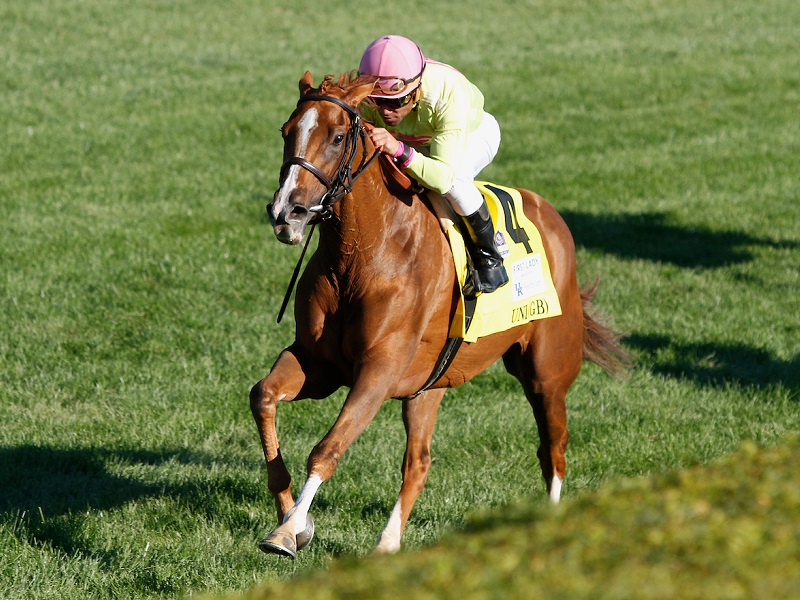 Uni unleashed a furious run through the stretch to score a 2½-length victory over Juliet Foxtrot (GB) to win the 22nd running of the $400,000 First Lady Presented by UK HealthCare (G1) in course-record time of 1:32.87 for the mile on firm turf.

Turning for home, Rosario moved Uni out into the seven path for clear sailing, collared Juliet Foxtrot at the eighth pole and drew off.

With the victory, Uni earned a berth in the $2 million Maker’s Mark Breeders’ Cup Filly and Mare Turf (G1) to be run at 1 1/4 miles on Nov. 2 at Santa Anita.

Uni is a 5-year-old daughter of More Than Ready out of the Dansili (GB) mare Unaided (GB).

“It’s another addition to her tremendous career as a miler. She’s real solid when she’s put at this distance and she’s gone to multiple tracks and has shown that kick.”

“At some point I thought she (favorite Rushing Fall) would have a little more speed than me and I’d be looking to see where she was and probably follow her and she’d put me in a good spot. In the first turn, it looked like they were going pretty good speed, and I just followed Rushing Fall. (Uni) came with a nice run like she always does. She’s unbelievable. She has a long stride and she just kept coming and coming.”

“Good trip. I was on the inside to save ground. We got going pretty fast. She did good but moved earlier than I wanted, but the horses in front of me were getting tired so I had to make a quick move. I think she was second best today. I think Uni ran the best race. She ran by me pretty easy – still a nice effort from my filly.”

“We had a good trip and she made a good move.”

“I had a beautiful trip all the way. It went pretty fast in :22 and :45. I was in midpack, traveled well, passed some horses. Just turning for home, I moved to pass a couple of horses, but at the top of the stretch, she didn’t give it to me. She was more flat today. For (whatever) reason she didn't respond.”

“We’ll probably regroup, talk to Chad (Brown) and come up with a plan. Maybe (send) her down to Stonestreet (in Florida) and let her winter down there and then come back and run her next year.”

“Javier was going to let the pace dictate where he was going to put her. She’s done everything: She’s led, she’s come off the pace, she can run any style you need her to. Maybe it was a little hot, maybe it was a little firm today. She likes a little give to the ground. It could have been a number of things. She ran lights out in the Just a Game (G1), lights out against Sistercharlie (IRE). It’s hard to be disappointed with a horse who has won two Grade 1s this year. I would have loved to win another Grade 1 at Keeneland, but I’m not disappointed in the horse at all. I’m happy the horse is sound and we get to fight another battle.”