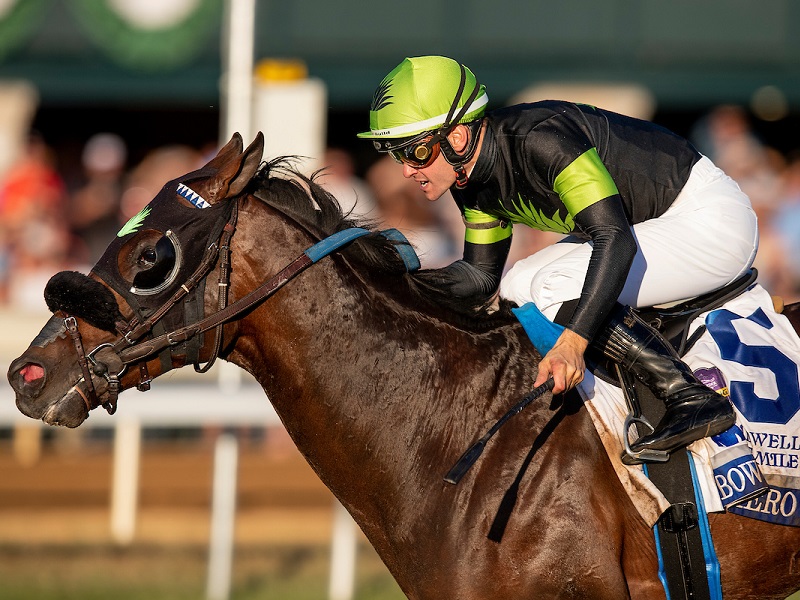 Agave Racing Stable, ERJ Racing and Madaket Stables’ Bowies Hero emerged from a crowded pack in the stretch to win the 34th running of the $1 million Shadwell Turf Mile (G1) for 3-year-olds and up by three-quarters of a length before a chamber of commerce Saturday afternoon crowd of 26,567. (Click here for a replay of the race.)

The blockbuster day featured five graded stakes worth $2.35 million, including the Shadwell Turf Mile and three other Breeders’ Cup Challenge races in which winners earned automatic berths in the 36th Breeders’ Cup World Championships at Santa Anita on Nov. 1-2.

Earlier on the 11-race program, McShane Racing’s Stubbins rallied from far off the pace to win the $200,000 Woodford (G2) Presented by Keeneland Select in course-record time.

In the Shadwell Turf Mile, jockey Flavien Prat had Bowies Hero racing in midpack early on, swung seven wide at the head of the stretch for clear running and collared Diamond Oops in deep stretch to claim his second Grade 1 victory in his career.

The victory is the first in a Keeneland stakes for Prat and trainer Phil D’Amato.

A winner of four graded stakes, Bowies Hero is a Kentucky-bred son of Artie Schiller out of the Sky Mesa mare Remembered.

It was another nose back to First Premio in fourth followed by March to the Arch, 2018 winner Next Shares and Divisidero. Van Beethoven and Bandua in a dead-heat for eighth with favored Valid Point, Admission Office, Vintager (GB), Robin of Navan (FR) and Real Story completing the field.

“About a million dollars (purse of Shadwell Turf Mile), compared to $200,000. We’ve always had the confidence in this horse. He’s had some tough trips. Today, (jockey) Flavien (Prat) was able to put him in the right spot and he was able to fly home.”

On earning a berth in the Breeders’ Cup Mile (G1) at D’Amato’s home track of Santa Anita.

“It will be nice to walk over – probably (as) one of the favorites – right out of your own barn. And to win one at Keeneland is always special.”

“I thought I had a good trip. My horse broke well – better than the other day (when fifth at Del Mar in the Del Mar Mile-G2 on Aug. 18). I was able to put myself in the race, was able to tip him out around the turn and get him ready to make his run. And then he got the job done. (The battle between several horses right at the wire) was great. When you win, it’s great. When you get beat, it’s frustrating. He always gives you everything he has.”

“We were close to the pace, broke very sharp. Settled nice on the backside. He ran big today. It was a close finish for second and he ran a big race for sure.”

“The draw (12 hole) was a big handicap to my horse, probably the difference between winning and losing. He’s run good. He’s an 8-year-old. The trainer (David O’Meara) has done well with him.”

“I tried to find room and get a spot in the race. Turning for home, I tried looking for a seam. It was a tough race, a lot of traffic, a lot of horses – a lot of good horses. I tried to get a jump but it was a lot of traffic. It was a big step up today for a young horse. I think he ran huge in the Secretariat (G1). We tried to step up a little bit and maybe get lucky but it was a tough race. I’m not disappointed, I think he’s a good horse. Sometimes you have to test the waters a little bit.”