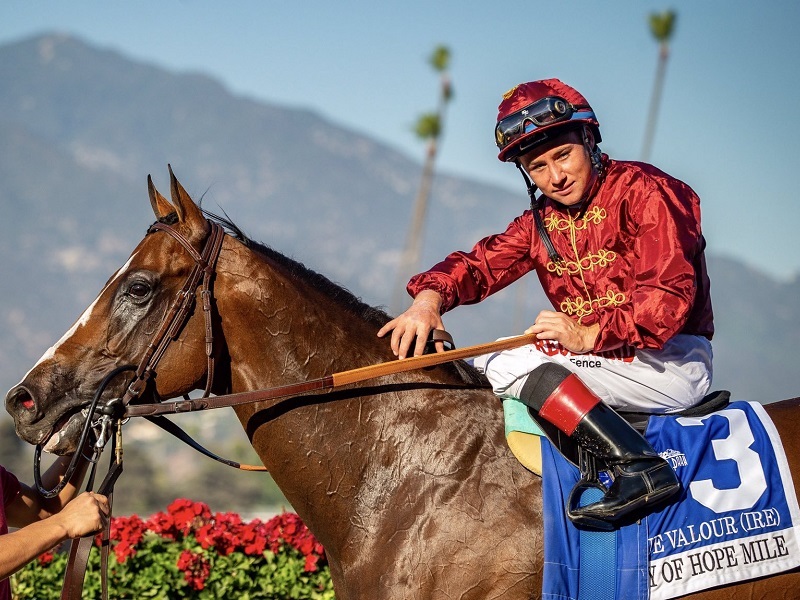 ARCADIA, Calif. (Oct. 5, 2019) — Idle since Feb. 9, trainer Simon Callaghan’s Irish-bred True Valour unleased a furious stretch rally to prevail by a head in a thrilling five-horse photo in Saturday’s Grade II, $200,000 City of Hope Mile at Santa Anita.  Ridden for the first time by Drayden Van Dyke, the 5-year-old full horse by Kodiac got a mile on turf in 1:32.82.

Midpack while fifth in the run up the backside, Van Dyke saved ground at the rail around the far turn, split horses two deep turning for home and outran Restrainedvengence, Prince Earl and Kingly for the money.

Restrainedvengence, fresh off a facile win in the $50,000 Rolling Green Stakes at Golden Gate Fields Sept. 2, pressed pacesetter Kingly throughout and outlasted favored Prince Earl by a nose for second money.

California-bred Prince Earl, third the entire trip, just missed while finishing a head in front of Kingly. Trained by Phil D’Amato and ridden by Geovanni Franco, Prince Earl was off at 5-2 and paid $3.60 to show.

DRAYDEN VAN DYKE, TRUE VALOUR, WINNER:  “Simon told me to keep him covered up, that’s the main thing. If he sees daylight, he gets aggressive, which he was early.  From there, I just tried to find a path and someone to follow. I knew I had won, they (the placing judges) were trying to figure out who was second and third."

SIMON CALLAGHAN, TRUE VALOUR, WINNER: “He’s such a cool horse he always comes up and shows a big showing. It was nice to get the head bob today.

“He had some time off after the Thunder Road stakes (Feb. 9) due to some minor bone bruising and we wanted to give him some time off.  We felt we had him really fit today. He was pretty fresh early, he pulled Drayden early, gave him a perfect ride, he sprint quick to the front and it worked out well. He needs to play his cards where they lay and Drayden certainly did that.

“Qatar (Racing Limited) may want to go for the Breeders’ Cup Mile,  it’s here and he’s shown a pretty good affinity for the track as far as his last two races, it will be tougher but they might want to take a shot.”

VAL BRINKERHOFF, CO-OWNER, TRAINER RESTRAINEDVENGENCE, SECOND: “I’m tickled to death. He’d been training great, lights out. I kept telling some of these agents that, but I had a heckuva time getting a jock. It worked out, ’cause Martin rode him great. Last time out up at Golden Gate, he didn’t even have to get off a gallop, that’s how easy he won up there. He’s just now coming into himself. He was still aggressive today, but he’s calming down.”