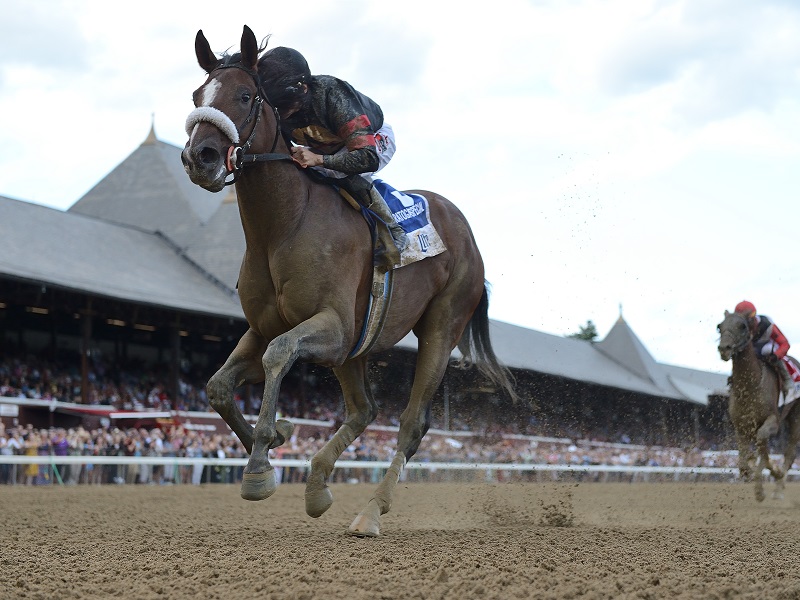 Jockey Junior Alvarado placed the bay son of Hard Spun 2 ½ lengths off the pace in fifth position in the 6 ½-furlong sprint for juveniles over the main track as Tuggle and Long Weekend battled up front through an opening quarter-mile in 21.71 seconds.

Approaching the far turn, Green Light Go was full of run and swung three-wide as Alvarado asked the talented bay colt for more. At the quarter-pole, Green Light Go was on even terms with Tuggle and moved past the pacesetter drawing away to a 3 ¾-length victory in a time of 1:15.68 over a fast main track. Noose closed late to get second finishing 1 ¾ lengths ahead of Tuggle.

Completing the order of finish were Peruvian Boy, Zyramid, Long Weekend and Iberico.

The victory was a fourth stakes win of the meet for Alvarado, who piloted Green Light Go to a wire-to-wire victory in his career debut at Belmont Park for trainer Jimmy Jerkens. It was a second win in the Saratoga Special for Alvarado, who won the 2015 edition aboard Exaggerator.

"We knew coming into the race it was going to be a test for him to see what he could handle," Alvarado said. "I told Jimmy, 'Let's leave the gate running and if he takes the lead on his own, that's fine; and if not, I'm not going to rush him off his feet.' But I knew I had to get him out of there."

Alvarado noted how professional the young horse has been so early on in his career.

"I put him in the race and he handled everything very professionally," Alvarado said. "I was just a pilot on top of him. I knew how much horse I had the whole way, and I was very excited at the way he was handling the kick back, and just rating behind horses very kindly. We knew how good he was and I trusted him there."

Green Light Go entered the Saratoga Special off of two bullet works over the main track, the most recent of which was a half-mile move in 46.20 seconds on Tuesday morning.

"He ran well without having to be on the lead and that was good to see. The track has been so speed-favoring initially," Jerkens said. "I told Junior [Alvarado] to take him out of there and don't discourage him from running, but if someone really wants the lead, that it'd be fine. It turned out he didn't break quite as fast as his first start, but it worked out well.

"He sat in the pocket just nice up against the bridle," Jerkens continued. "He didn't care about taking dirt which was really nice to see. He leaned a little in the stretch; maybe a little green, but I guess he's still learning, too. He had good purposeful works between races and has handled it. He was also composed in the paddock, so we might really have a nice one here."

The next graded stakes event of the for 2-year-olds on the main track is the Grade 1, $350,000 Runhappy Hopeful on September 2, but Jerkens said that Green Light Go would likely bypass the event in favor of the Grade 1 $500,000 Champagne on October 5 at Belmont Park.

"We'll talk to Frank [Stronach] and maybe we'll skip the Hopeful," Jerkens said. "The Champagne seems a little more appealing than the Hopeful at the moment, but we'll see."

Returning $5.10 for a $2 win wager, Green Light Go enhanced his lifetime earnings to $154,000 and is now unbeaten through two starts.

A Kentucky homebred, Green Light Go is out of the stakes-winning Pleasantly Perfect broodmare Light Green.