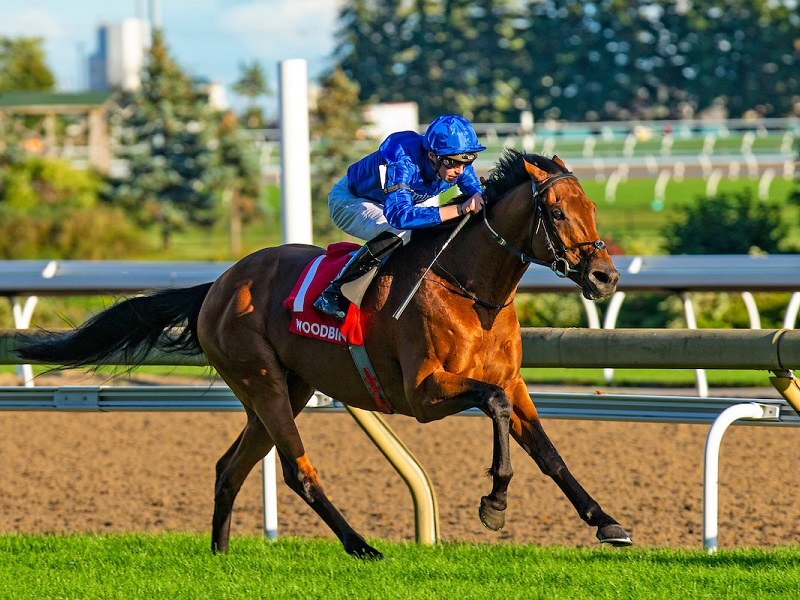 TORONTO, September 14, 2019 – It wasn’t the smoothest of starts, but Godolphin homebred Old Persian finished in style to make his Canadian debut a winning one in the $300,000 Northern Dancer Turf Stakes (Grade 1) on Saturday at Woodbine.

Sent off as the 3-5 choice, Old Persian sprinted away from his rivals in the late going to notch an impressive score in the 1 ½-mile marathon contested over ‘good’ going on the E.P. Taylor Turf Course.

It was longshot Cooler Mike who seized the lead from the outset, as the four-year-old son of Giant Gizmo was given ‘catch me if you can’ orders from jockey Patrick Husbands. Old Persian, under James Doyle, broke sluggishly from the gate, but quickly recovered to settle in third, as the leader, ahead by open lengths already, took the field through an opening quarter-mile in :24.82.

Cooler Mike and Husbands continued to widen their advantage through a half-mile in :47.63, with Tiz a Slam, Old Persian, and Sir Sahib running second, third, and fourth, respectively.

As the front-runner began to fade – a 12-length lead had been trimmed to a 1 ½-length advantage at the mile mark – Tiz a Slam soon took over top spot, with Focus Group and Old Persian picking up the chase. Ahead of the stretch call, timed in 2:03.09, Doyle asked Old Persian for his best, and the four-year-old son of Dubawi responded in kind.

At the wire, Old Persian was 2 ½-lengths in front of Nessy, who finished a nose ahead of Focus Group. Tiz a Slam was a head further back in fourth. Sir Sahib was fifth, and Cooler Mike finished sixth.

“From the minute he stepped foot on the track, he wasn’t really 100 per cent concentrating,” noted Doyle. “He was more enjoying the crowd rather than what was going on in front of him, which is amazing because he’s run some cracking races at Meydan and there is no bigger stand than that. But obviously we were a bit concerned early. He missed the break, but they went pretty quick and we were able to muster some speed down the fence to secure a bit of space. We had a very clean trip all the way through. He’s a powerful stayer at this trip with a good turn of foot and when the pace came up in the stretch, he exceled and sprinted away nicely.”

Friday’s inclement weather in the Toronto area was certainly not a negative for Old Persian.

“I think the rain that you guys had during the week definitely played to our strengths,” said Doyle. “The track is in beautiful condition, it’s dried out throughout the day. We had a beautiful racing surface and I think there were no complaints on that front.”

A British-bred, Old Persian came into the Northern Dancer off a third-place performance in the Group 1 Grosser Preis von Berlin over a mile and a half at Hoppegarten, Germany, on August 11.

The bay colt was at the top of his game in Dubai earlier this season, taking a pair of 1 ½-mile turf events, the Group 1 Dubai Sheema Classic on March 30, and the Group 2 Dubai City of Gold three weeks earlier.

Now he can add a Canadian score to a racing resume that features nine wins, one second, and a pair of thirds from 16 starts.

“He didn’t run great in the Coronation back at Epsom there after a good run in Dubai,” said Alex Merriam, assistant to trainer Charlie Appleby. “We were pleased enough with his run in Germany and I think the ground was a bit on the soft side for him there. But James gave him a nice ride today and it worked out well.”

A return to Woodbine might be in the cards, specifically, a spot in the starting gate for the Grade 1, $800,000 Pattison Canadian International on October 12.

“Not quite sure at the minute,” offered Merriam. “I spoke to Charlie and he said we’ll go back to Europe, see how he is, see how he comes out of the race and make a plan from there. No immediate plans at the minute.”