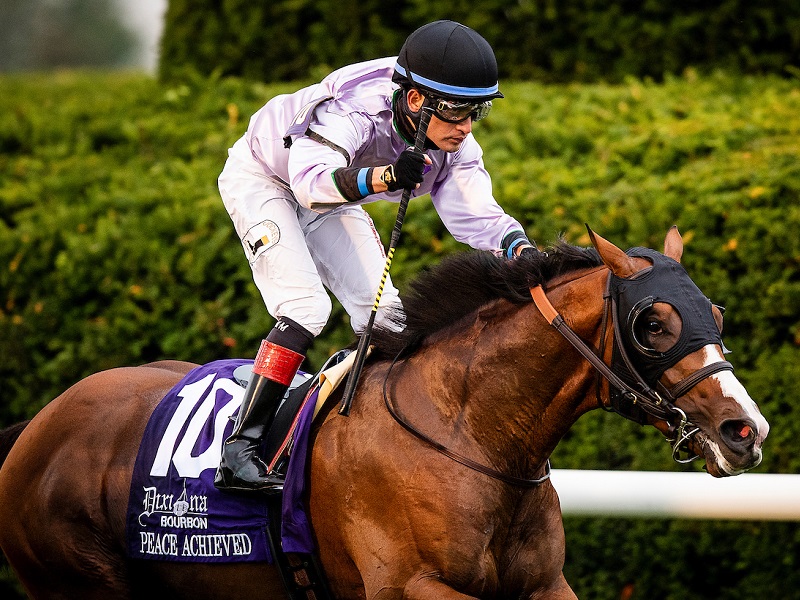 “Horses are like anybody. You start winning, and it helps (this is Peace Achieved’s third consecutive win). He’s gotten better and better. I think he’ll like Santa Anita. (Securing a spot in the Breeders’ Cup Juvenile Turf-G1 with the “Win & You’re In” Challenge series) “is great for so many reasons. It’s become such a big part of our planning now every year. This is our second (Challenge Series win) this year. It’s how we lay out our season. I’m not going to bring him out (to Santa Anita) until maybe a week before. We’ve had pretty good luck going west and most of the time it’s five or six days out (from the race) so we’re not going to change that.”

“The boss (Mark Casse) mentioned the inside being a little softer than the outside, so we had a great post position (10 of 14). He came out of there running, and I just stayed a little wider for better ground. He was the best horse today – he’s very nice.”

“He got close to the pace for being 14 wide. I'm very satisfied with the way he did it; in a 14-horse field he gave me a good run. If we had (left the gate) better, we could have won the race. He passed horses little by little.”

“From the draw we had, I basically left it up to Javier (Castellano) and what do you do? (Vitalogy) was a little wide the whole way, and he traveled a lot farther than the winner. But he ran really good, and the whole objective was to get him into the (Breeders’ Cup) Juvenile Turf. I think we probably would get in after today. Maybe we can go there and rectify it.”

“My horse ran a very good race coming off the maiden (special weight on Aug. 31), the race where he finished second at Saratoga. He’s in good hands with (trainer) Rusty (Arnold) and his team, so we expect great things from him. (The pace) was honest. Everybody was doing it comfortably and we were happy with where we were.”