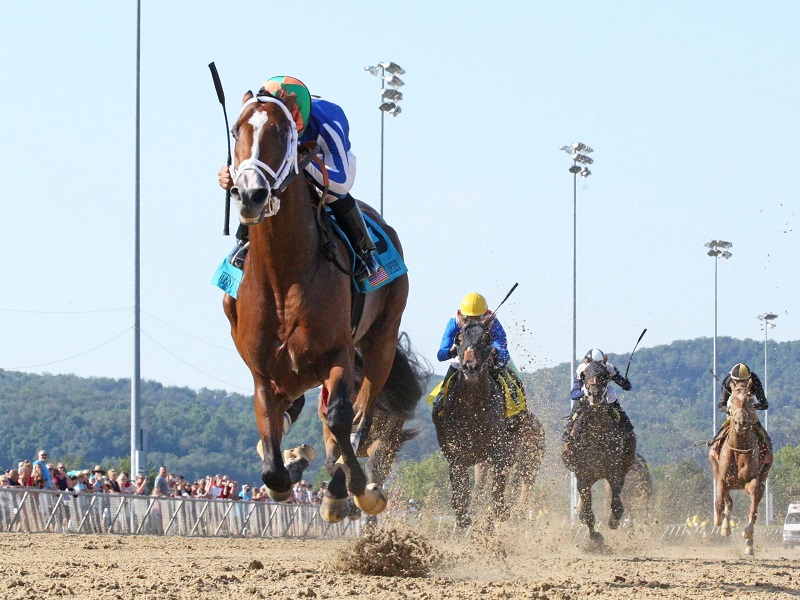 “Hopefully there are bigger and better things for us,” said Chester Thomas, the principal of Allied Racing.

Mr. Money, a colt by Goldencents out of the Tiznow mare Plenty O’Toole, entered Mountaineer’s signature race with three consecutive Grade III wins—the Pat Day Mile and Matt Winn Stakes at Churchill Downs and the Indiana Derby at Indiana Grand, which he won by a combined 14 ¼ lengths with Gabriel Saez aboard. His score in the West Virginia Derby, again with Saez up, looked as easy as the previous three.

Heavily favored Mr. Money fired away from post 9 in the 1 1/8-mile Derby and was taken back a bit by Saez as Plus Que Parfait took the rail and the lead. The pace was dawdling—a half-mile in :49.10—so Saez asked Mr. Money to apply pressure to the front-runner as Chilly in Charge began to gain on the top pair three-wide.

Mr. Money began to edge away at the top of the stretch and gradually opened the advantage to six lengths as Chess Chief rallied late to nab Plus Que Parfait for second. The winning time was 1:50.28 on a track rated fast.

Dispatched at 1-2, Mr. Money returned $3 to win in a nine-horse field. The win-place-show pool totaled $393,439, in large part because of a large amount of show money on the favorite.

“(Trainer Bret Calhoun) has done a tremendous job with him, and my job was to find the winner’s circle,” Saez said. “On the final turn I asked him to get it done, and here we are. Good horses make you look good.”

“He’s a very good horse, and Chester has allowed me to manage him in a good way to keep his confidence level up,” said Calhoun, who a race earlier won the $200,000, Grade III West Virginia Governor’s Cup with Silver Dust.

Thomas, a western Kentucky coal executive with a keen interest in the Thoroughbred business, credited Calhoun and Saez with Mr. Money’s recent success.

“Bret has done a great job, and from what I could see Gabe did a wonderful job getting him to relax (through slow fractions),” Thomas said. “I knew he was sitting on a lot of horse when he let him loose. What we saw on paper became reality.”

Thomas, when asked if the $1 million, Grade I Pennsylvania Derby at Parx Racing Sept. 21 is in the cards for Mr. Money, looked at Calhoun and asked him the question.

“It’s a good possibility,” the trainer said. “That’s definitely where we are hoping to be.”