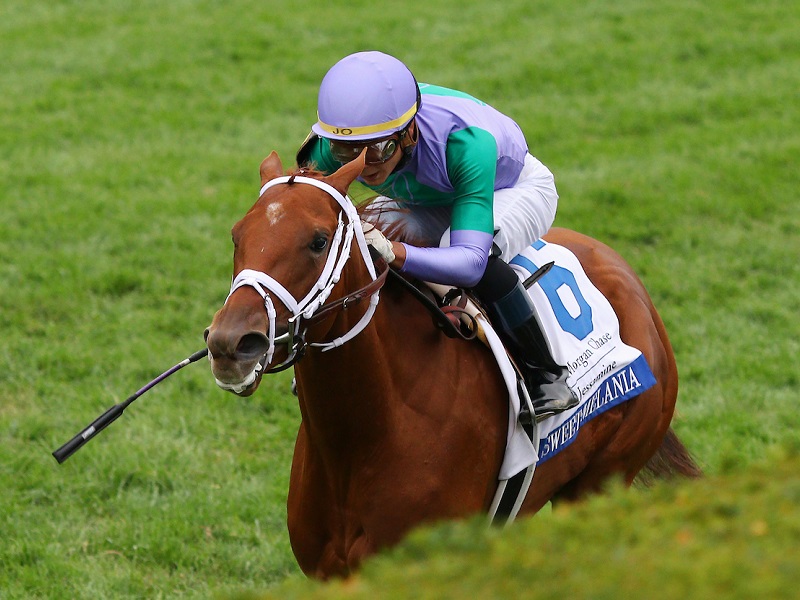 Robert and Lawana Low’s Sweet Melania moved to the lead on the backstretch and then drew off in the stretch to post a 5½-length victory over Witez in the 29th running of the $200,000 JPMorgan Chase Jessamine (G2) for 2-year-olds fillies before a Wednesday afternoon crowd of 9,583.

The victory, by the largest margin in the history of the race, earned Sweet Melania a fees-paid berth into the Breeders’ Cup Juvenile Fillies Turf (G1) to be contested at a mile on Nov. 1 at Santa Anita. The JPMorgan Chase Jessamine was the final Breeders’ Cup Challenge race for this year’s World Championships.

Trained by Todd Pletcher and ridden by Jose Ortiz, Sweet Melania covered the 1 1/16 miles on a turf course labeled as good in 1:43.13. It is the fourth victory in the race for Pletcher, who won previously with Ocean Drive in 2002, Paddy’s Daisy in 2004 and J’ray in 2005.

It is the 55th Keeneland stakes victory for Pletcher, the track’s leader in that category.

It is the first victory in the race for Ortiz, who has won three graded stakes in the first four days of the Fall Meet.

Jezebel’s Kitten was another 1¼ lengths back in fourth and was followed in order by Eye of a Soldier, Morning Gold, Diamond Sparkles, Swanage, Indochine, High On Gin, Fujairah, Takeitback, Envied and Lemon Scat.