Saratoga Bob Back to Defend Title in Maryland Million Classic 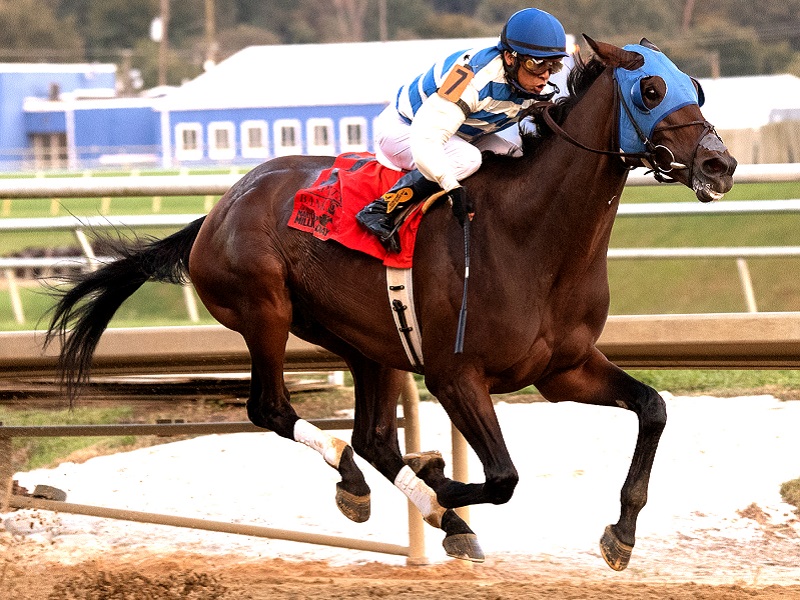 LAUREL, MD – Robert Manfuso, Wayne Harrison and Katy Voss’ Saratoga Bob, who earned the biggest victory of his career in last year’s Maryland Million, will make his first start in 20 weeks as he goes about defending his title in Saturday’s $150,000 Classic at Laurel Park.

Run at 1 1/8 miles over the main track, the Classic for 3-year-olds and up serves to highlight the 34th annual Jim McKay Maryland Million Day program, one of seven stakes and four starter stakes worth $1.02 million in purses that help comprise ‘Maryland’s Day at the Races,’ named for the late Hall of Fame and 13-time Emmy Award-winning broadcaster who helped launch the groundbreaking concept in 1986.

Post time for the first of 12 races is noon.

A total of 155 horses were entered on the program, an average of 12.9 per race. Five races are scheduled for Laurel’s world-class turf course, attracting 68 entries, an average of 13.6 per race.

Bred by Manfuso and Voss, who also trains the 5-year-old Friesan Fire gelding, Saratoga Bob was third choice in a field of 10 for last year’s Classic, prevailing by a half-length in 1:51.28. It was Voss’ first Classic win and the third for jockey Edgar Prado, moving him past retired fellow Hall of Famer Ramon Dominguez for most Maryland Million wins with 18.

“That was fantastic. It was very special,” Voss said. “I don’t know how tough a race it was last year and I don’t know that it’ll be much tougher this year. I think we’ve got a shot, but we don’t have any grand expectations with him not having a race under his belt for 4 ½ months. We’ll just have to see.”

Saratoga Bob has raced exclusively at Laurel, with four wins, three seconds and four thirds from 16 starts, and a lifetime bankroll of $231,832. This will be his first time back in stakes company and only his second try at 1 1/8 miles since the Classic.

This year, Saratoga Bob has one win from five starts, coming in his season opener Feb. 3. He last raced June 1 in a 1 1/16-mile optional claiming allowance, finishing fifth in only his second career try on the turf. Voss pre-entered Saratoga Bob in both the $125,000 Maryland Million Turf and $100,000 Maryland Million Sprint, run at eight and seven furlongs, respectively.

“I actually considered running him in the Turf, just because it was a mile and he hasn’t run in so long,” Voss said. “He doesn’t deal with the hot weather very well, so we had planned to give him the summer off. We had hoped to get him a prep race but he had a couple different things to deal with and then the prep race didn’t go, so we’re going into the Classic without it. But, he’s doing good, knock on wood.”

“A couple weeks ago I worked him gate to wire out of the starting gate and then, when it looked like we were heading to the Classic, I went ahead and worked him a mile last Saturday,” Voss said. “He’s doing well. He’s a decent work horse, [but] getting a race under his belt would have made a big difference.”

Caonabo Stable’s multiple stakes winner Clubman, the 2-1 morning-line favorite, is back for his third straight try at the Classic but first for trainer Rodolfo Sanchez-Salomon. Last year and 2017, when he ran fourth, came for previous trainer Jonathan Maldonado.

“He has run great in this race the last two years,” Sanchez-Salomon said. “He is doing great. We’ve got a really good shot in there. Hopefully, we get a little bit lucky and get a good trip and win the race.”

A gelded 5-year-old son of Not For Love, the Maryland Million’s all-time leading sire with 36 wins, Clubman exits a fourth behind Grade 3-placed Cordmaker in the DTHA Governors Day Handicap Sept. 28 at Delaware Park, which came off a string of bullet workouts at Laurel.

“The last race, he didn’t grab the bridle for some reason. He likes to be ridden a certain way, and he didn’t run that day,” Sanchez-Salomon said. “When he runs here, he’s a different horse. He’s doing awesome right now.”

Clubman owns six of his nine career wins from 25 starts at Laurel, though his two stakes wins have come out of town. He won the seven-furlong Russell Road April 20 at Charles Town and romped by 9 ½ lengths in the 6 ½-furlong Maryland Coalition at Timonium Aug. 24. Julian Pimentel, aboard for that win, gets the return call. Pimentel ranks fifth as one of only five jockeys with double-digit Maryland Million wins (13), but has never won the Classic.

“He won the Timonium race for fun. After the last race he ran at Delaware, he was kicking the stall down. He didn’t get to run at all, and it was disappointing because he was doing awesome,” Sanchez-Salomon said. “Julian came to two-minute lick him last Saturday, and he dragged him all the way around.”

Among the newcomers is Shirley Lojeski’s homebred Forest Fire, looking to give Friesan Fire his second straight Classic win as a sire. The 4-year-old gelding comes in on a two-race win streak, both by a neck in optional claiming allowance spots at Parx going one mile and a mile and 70 yards.

“He’s doing really good,” Kentucky Derby (G1)-winning trainer John Servis said. “He breezed the other day and went really good. I couldn’t be happier with him. He’s shown us that he deserves a shot.”

Forest Fire raced twice at Laurel last winter, winning an optional claiming allowance in the mud and finishing second to V.I.P. Code, beaten less than a length in the 1 1/16-mile Private Terms Stakes. He missed some time after that race and again this year, but Servis said the horse has put those issues behind him.

“He came up with a little issue last year and we had to stop on him. Then we brought him back and just thought that maybe he didn’t come back the same, but actually there was another issue that we had to address,” Servis said. “We got that straightened out and he came back and knocked out two wins, back to back. He’s back on track and doing good.”

Servis also pre-entered Forest Fire in the Turf. Six-for-12 lifetime, he has always shown Servis the same kind of heart he displayed in each of his last two wins.

“He loves to fight. He loves it. In the morning, even before he ever ran, he’d put a neck in front and then he’d throw his ears up and get to waiting on horses, and as soon as horses would come to him he’d jump right back in the bridle again. He’s always been a horse that’s been real game like that, Servis said.

“When we first tried him in the [Private Terms], he got beat and he ran really game. He dug in and ran hard. And the race before that was the same kind of race. A horse hooked him, he looked like he was beat and he dug back in again,” he added. “He’s sitting on go. He’s ready.”

Rounding out the field are Crouchelli; Prendemi, Monmouth Park stakes winner this spring and summer; Tappin Cat, second by a half-length in the Star de Naskra Stakes Aug. 17 at Laurel; Torch of Truth, racing third off the claim for trainer Jamie Ness; and Trifor Gold, a distant second to Alwaysmining in the Federico Tesio Stakes April 20.

Maryland-breds on the also-eligible list, and only able to draw in if the main body of the race drops below eight Maryland Million-certified horses, are, in order: multiple stakes winner Cordmaker, third by two necks in the Pimlico Special (G3) in May; Top Line Growth, this summer’s promoted winner of the Iowa Derby who ran third in the Sept. 2 Smarty Jones (G3); and 2017 Classic winner Bonus Points.