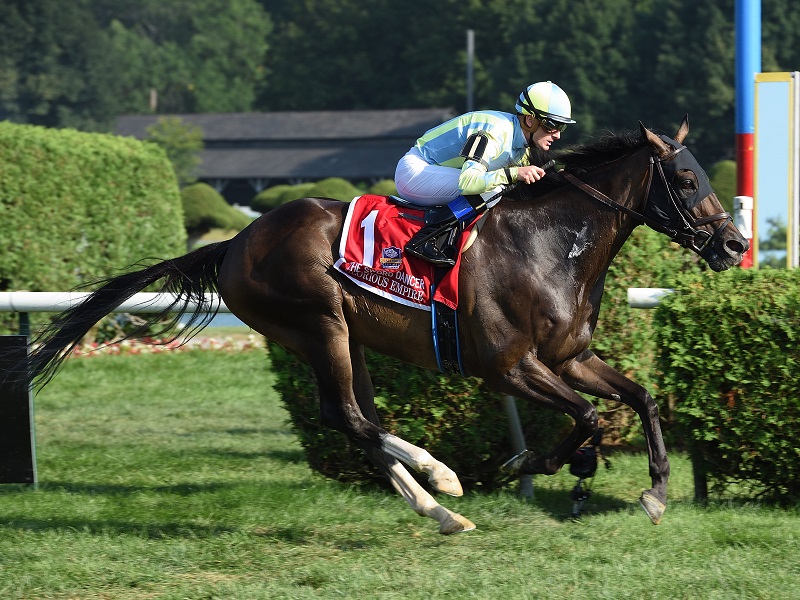 HALLANDALE BEACH, FL - An injury kept Matthew Schera’s Grade 1 winner Glorious Empire out of the inaugural $7 million Pegasus World Cup Turf Invitational (G1) at Gulfstream Park, but his connections are hoping to be there for the second go-around in January.

Trainer James ‘Chuck’ Lawrence II said the 1 3/16-mile Pegasus Turf for 3-year-olds and up – won in January by Bricks and Mortar, one of the leading contenders for 2019 Horse of the Year – remains on the radar for Glorious Empire.

“The Pegasus is still our main goal, if he jumps back up to that status again,” Lawrence said. “That’s the goal right now, and we’ll see how he does.”

Glorious Empire is winless in two starts this year, finishing sixth as the favorite in the one-mile Baltimore-Washington International Turf Cup (G3) Sept. 21 at Laurel Park, his first race in more than nine months. Last out, he ran fifth in the 1 1/8-mile Knickerbocker (G3) Oct. 14 at Belmont Park.

Last year, Glorious Empire was an Eclipse Award finalist for champion male turf horse following a campaign that saw him win four of six starts and $767,830 in purse earnings, including the Sword Dancer (G1) and Bowling Green (G2) at Saratoga. He capped the year with a convincing triumph in the Fort Lauderdale (G2) at Gulfstream, besting a field that included 13 graded-stakes winners, five of them Grade 1.

Glorious Empire exited the Fort Lauderdale with a tear in his right front suspensory ligament. He underwent an innovative procedure that included minor surgery Jan. 5 and a stem cell infusion to promote healing.

“He ran the other day and we weren’t quite sure what happened,” Lawrence said. “He scoped good. He’s come back from the injury and you can tell from the works I’ve been a second or two slower with him, and maybe I just didn’t have him tight enough.”

Lawrence said the suspensory has not been an issue and he is looking ahead to a possible return trip to Gulfstream for the $200,000 Fort Lauderdale Dec. 14, contested at 1 1/8 miles, as Glorious Empire’s Pegasus prep. The 1 3/8-mile Red Smith (G3) Nov. 23 at Aqueduct is also a possibility.

“We scanned his suspensory and it’s 100 percent,” Lawrence said. “Whether we do the Red Smith or the Fort Lauderdale, we’ll leave it up to him.”