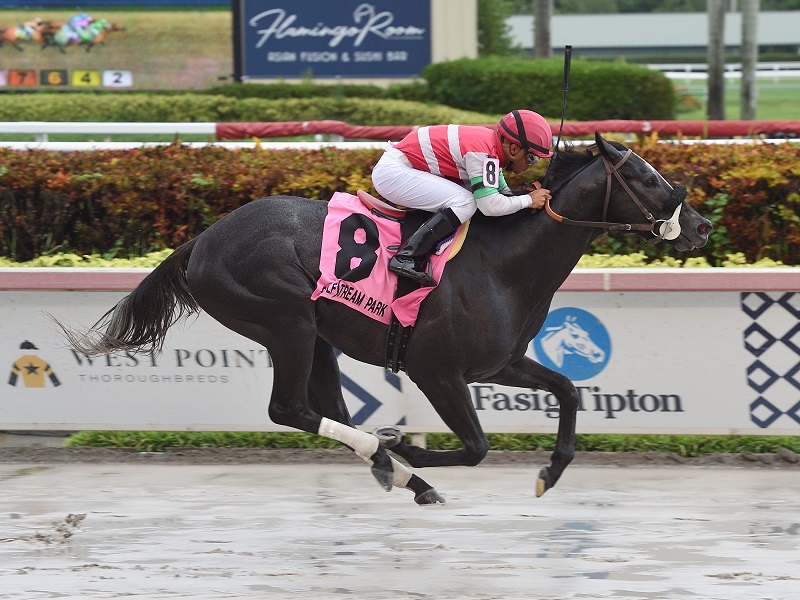 MIAMI GARDENS, FL – Winning would do the heart good for a trainer who underwent triple-bypass surgery less than three weeks ago.

Monarch Stables’ Art G Is Back will be looking to get back to his winning ways in Saturday’s $75,000 Millions Classic Preview at Gulfstream Park West and give trainer Ron Spatz a boost on the road to recovery.

Not that Spatz has been training from the sidelines since undergoing the heart procedure.

“I’m at work. I’ve been going to work all week. I’ll be there Saturday,” the veteran South Florida trainer said.

Art G Is Back, like his trainer, has shown a lot of heart during his career, becoming a multiple-stakes winner while showing high levels of talent and versatility on dirt, slop and turf. The 3-year-old throwback, who has finished in the money in nine of 12 starts, is coming off a subpar showing on turf in the Sept. 21 Bear’s Den Stakes at Gulfstream after winning back-to-back dirt starts in his two prior starts. The son of Exchange Rate finished seventh after lagging far off the pace in the 7 ½-furlong race for 3-year-olds.

“I wasn’t happy with his trip. He was 100 miles out of it and got beat five lengths,” Spatz said.

Prior to the disappointing effort, Art G Is Back defeated older rivals while prevailing by 13 ¾ lengths in an off-the-turf allowance and scoring gamely in the $100,000 Benny the Bull stakes for Florida-breds.

“I think he’s a little better on dirt,” Spatz said. “I think his best distance is seven furlongs or a mile. He has been two turns once at a mile and a sixteenth at Gulfstream when he was younger. He led all the way and got beat in the last two jumps. It wasn’t a bad race. He’s an older horse now. He should be OK with that distance.

“We’re going to try this and see if he deserves to go in the Sunshine Millions Classic,” he added. “We’re also experimenting with the [Gulfstream Park West] surface. He’s never been on it. We’ll see.”

Art G Is Back, who is a nose and a neck away from being a multiple-stakes winner on turf as well as dirt, will be ridden for the first time Saturday by Edgard Zayas.

David Melin, Leon Ellman and Laurie Plesa’s Mr. Jordan is coming off a pair of uncharacteristic off-the-board finishes at Gulfstream Park but will return to Gulfstream Park West Saturday, when the 7-year-old gelding will seek his fourth straight victory in the Millions Preview Classic.

Mr. Jordan has won all five of his starts at Gulfstream Park West, all in stakes races. The gray veteran campaigner has gone winless in seven starts since capturing last year’s Classic Preview by 11 ½ lengths. The Eddie Plesa Jr.-trained gelding, who has earned more than $850,000 in purses during his 41-race career, will be ridden by Paco Lopez.

Arindel’s Richard the Great, who finished second behind Mr. Jordan in last year’s Classic Preview, came off a 13-month layoff to register a dominating front-running 8 ¾-length victory in a $35,000 claiming race at Gulfstream Park Sept. 12.

“He’s a very nice horse, a great horse to be around. He had a little problem with his ankle,” trainer Juan Alvarado said. “The way that he’s training and the way that he came back from almost a year off, he’ll be tough in that race. He’ll be 1-2-3 in that race.”

Rajiv Maragh has the mount aboard the 7-year-old stakes-winning son of Distorted Humor.

Mar Racing Stable’s Hy Riverside, who finished well behind Red Crescent Oct. 3, brings a resume with multiple stakes victories, including a triumph in the 2017 Sunshine Millions Classic, into Saturday’s Classic Preview. Jeffrey Sanchez has the mount aboard the 7-year-old gelded son of Macho Uno, who captured the Big Red Stakes three starts back.