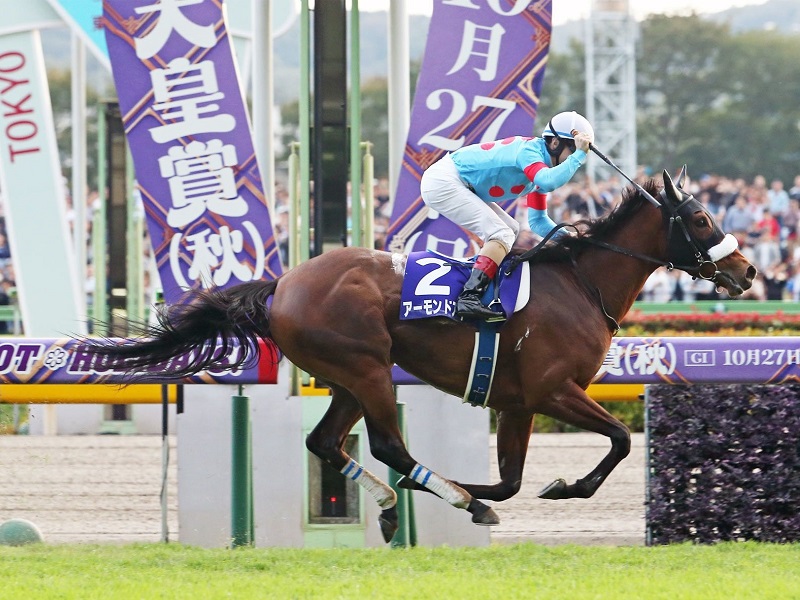 Almond Eye is among a stellar line-up of 50 horses selected for the HK$93 million LONGINES Hong Kong International Races at Sha Tin on Sunday, 8 December.

Japan’s superstar filly is just one of the 26 G1 winners set to compete and the headliner among a brilliantly-talented contingent of 24 overseas raiders aiming at this year’s “Turf World Championships”.

Almond Eye is one of 11 in a powerful cohort from Japan, which also features crack milers Indy Champ, Normcore and Admire Mars, this year’s classic heroine Loves Only You and further star fillies Lucky Lilac and the talented globe-trotter Deirdre, as well as G1 FWD QEII Cup (2000m) victor Win Bright.

The exciting fields for the four Group 1 features also include big-name Europeans: the six-strong Irish party includes G1 Irish Champion Stakes and G1 Champion Stakes heroine Magical - another outstanding filly on the world stage - who is set to lock horns with Almond Eye in what promises to be an enthralling Hong Kong Cup clash.

Magical’s G1-winning stable mates Circus Maximus, Magic Wand and Anthony Van Dyck are also among the event’s selected runners - the last-named is set to become the first winner of the Derby at Epsom to compete at the LONGINES HKIR. G1 Preis von Europa winner Aspetar is one of four challengers from Britain, while France has two high-class selected runners including Edisa, winner of the Jockey Club Oaks Invitational at Belmont Park in New York.

Australian representation comes in the form of the speedy mare In Her Time, a two-time G1 winner and third in the recent G1 Darley Sprint Classic (1200m).

Beauty Generation, Mr Stunning, Exultant and Glorious Forever completed an unprecedented Hong Kong clean-sweep of last year’s races and the quartet is engaged to defend their crowns. Beauty Generation in the Mile and Mr Stunning in the Sprint will attempt to match legendary miler Good Ba Ba’s record of three straight wins at the meeting.

“Almond Eye’s participation is particularly exciting when viewed in the context of the other world-class horses selected - champions of the calibre of Beauty Generation and Exultant, other global stars like Magical and the Derby winner Anthony Van Dyck, and the list is long and strong. Factor in the potential of rising stars like Aethero, Waikuku and our Derby winner Furore and everything points to a thrilling afternoon of sport on 8 December.”

World superstar Almond Eye heads to Sha Tin with a record of eight wins from 10 starts, with six G1 victories to her name. After winning last year’s Fillies’ Triple Crown in Japan, the four-year-old smashed her rivals in the G1 Dubai Turf at Meydan and ran with merit at a mile when third in the G1 Yasuda Kinen. The daughter of two-time LONGINES Hong Kong Sprint winner Lord Kanaloa returned from a long summer break with an impressive success in the G1 Tenno Sho Autumn (2000m) in October. Compatriot Win Bright is one from one at the course and distance thanks to his G1 FWD QEII Cup win in April.

Among those out to prevent a sixth Japanese win in the race are the Aidan O’Brien-trained top-liner Magical, winner of the Irish and “British” Champion Stakes, and recent G1 Mackinnon Stakes winner Magic Wand. Last year’s winner Glorious Forever is engaged again, as is his full-brother and 2017 victor Time Warp but the biggest home contenders could be the improving G1-placed Rise High and last season’s BMW Hong Kong Derby hero Furore.

Good Ba Ba is the only horse in HKIR history to win three times and he achieved the feat in the Hong Kong Mile in consecutive years. Beauty Generation, imperious in making it two wins in a row last year and another star of world racing, will have to bounce back from two recent defeats if he is to make the hat-trick. The world’s top-rated miler will face his latest conqueror, the improving Waikuku, as well as some brilliant overseas raiders.

Mr Stunning has peaked for the last two editions of this race and will attempt to become the Hong Kong Sprint’s first three-time winner. But he faces the flash new kid on the Hong Kong sprinting block, Aethero, who will attempt to become the first Southern Hemisphere-bred three-year-old to win a G1 at the HKIR: the chestnut, sensational when winning the recent G2 Jockey Club Sprint (1200m), has drawn comparisons to past champion Able Friend. The outstanding line-up includes plenty of other top-class contenders too: the talented grey Hot King Prawn is back from a setback and is a G2 winner of untapped potential at this level, while Hong Kong’s champion sprinter Beat The Clock is in, as is D B Pin, runner-up in the past two editions.

Japan’s Danon Smash and Australia’s In Her Time provide the overseas challenge. The former is a three-time G3 winner who has posted smart efforts in Japan’s two G1 sprints this year, placing fourth in the Takamatsunomiya Kinen (1200m) and third in the Sprinters Stakes (1200m). In Her Time has won the G1 Galaxy and G1 Black Caviar Lightning and was a fine third in the G1 Darley Sprint Classic (1200m) last time.

Anthony Van Dyck is set to become the first Derby (English) winner to contest the LONGINES Hong Kong Vase. The Ballydoyle-trained colt is selected alongside well-regarded stablemate Mount Everest who missed most of this year but returned in the autumn to run a promising sixth in the G1 Breeders’ Cup Turf. The British raiders are Aspetar, winner of the G1 Preis von Europa, Prince Of Arran who has made the frame in the past two renewals of the G1 Melbourne Cup, and the well-regarded G3 winner Young Rascal.

Japan has some of its best fillies and mares slated to take on Exultant: Deirdre, runner-up in the Hong Kong Cup last year, has been a marvel on her travels this year and won the G1 Nassau Stakes; Lucky Lilac won the G1 Queen Elizabeth II Cup at Kyoto last time; G1 Yushun Himba winner Loves Only You met her first defeat in five starts when third that day; Glory Vase is a G2-winning and G1-placed stayer.