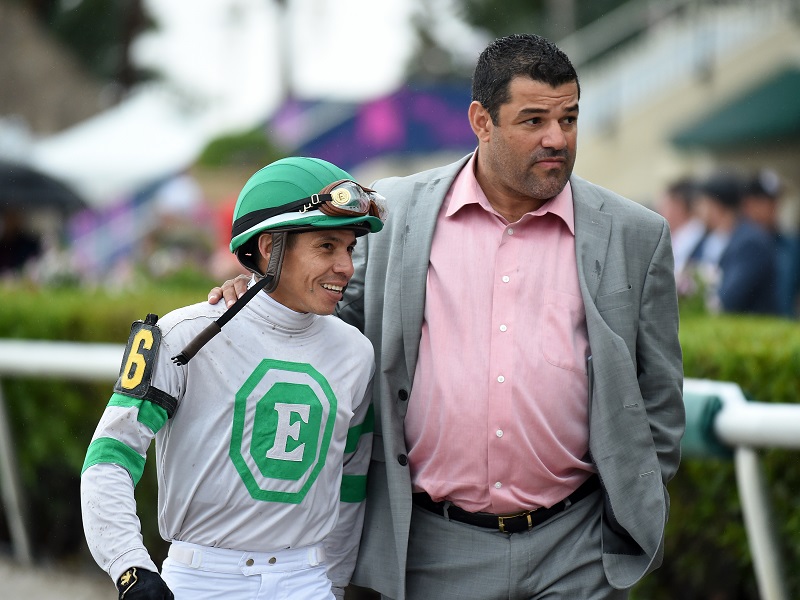 HALLANDALE BEACH, FL – No matter how much success Jorge Navarro has enjoyed and how many more accomplishments may come his way, the 44-year-old native of Panama City, Panama will always embrace the humble beginnings of his burgeoning training career.

Navarro looks back at his early days on the Calder Race Course backstretch with pride, using them as a gauge to judge just how far he has come in the world of thoroughbred racing. When he snapped Todd Pletcher’s 15-year Championship Meet reign at Gulfstream Park in April to claim the 2018-2019 training title, he was struck with memories of his modest start in the game.

“It meant a lot. The meet has always been a prestigious meet with well-known trainers from all over the United States and top quality of horses,” Navarro said. “Being a trainer from South Florida, watching those guys building their reputations and seeing what they’ve done over the years, to win it was amazing.”

Navarro had to celebrate his 53-47 decision over defending 15-time titlist Todd Pletcher on closing day of the 2018-2019 Championship Meet March 31 from afar. He was in Dubai, where he was also able to celebrate X Y Jet’s triumph in the $2.5 million Dubai Golden Shaheen at Meydan March 30.

“I was in Dubai [that week] and I really thought Todd Pletcher was going to catch me,” said Navarro, who had finished second behind Pletcher the previous three seasons. “Todd Pletcher has done amazing things all those 15 years. Winning the title meant so much to me.”

Navarro is gearing up for a defense of his title during the 2019-2020 Championship Meet that will get under way Friday, Nov. 29 at Gulfstream Park.

“About a month ago, 45 days ago, I mentioned something about cutting down on horses. As soon as I came down here to Florida, I kicked it into another gear – I’m getting stormed with horses,” he said. “My wife said, ‘Jorge, I thought you were going to slow down.’ I don’t know what it is. Maybe it’s because I’m home and with my family, but I don’t feel like slowing down yet.”

Fresh off his seventh consecutive training title at Monmouth Park, Navarro’s stable has gone through somewhat of a transition. Known for his considerable success with tough-as-nails warriors like X Y Jet, Private Zone, Sharp Azteca and War Story, Navarro has welcomed a lot of young horses into his barn.

“I love the claiming game, but I’m getting a lot of nice 2-year-olds,” he said. “I’m going to prove I can train a young horse.”

Navarro’s success with Shancelot during the 2019 campaign will likely encourage owners to entrust younger stock to him in the future. Shancelot, a 3-year-old son of Shanghai Bobby, won at first asking last February, scoring by a neck over Bodexpress, who would go on to finish second in the Florida Derby (G1) and compete in the Triple Crown. Shancelot returned to action three months later to win an optional claiming allowance at Monmouth Park.

“When I pull the plug it’s for a good reason,” Navarro said. “With Shancelot, we weren’t going to the Derby with him, that’s why we pulled the plug – to give him time to mature. It’s paid off.”

Shancelot captured the Amsterdam (G2) at Saratoga by 12 ½ lengths in his third start before finishing third in the H. Allen Jerkens (G1) at Saratoga and second in both the Santa Anita Sprint Championship (G1) and Breeders’ Cup Sprint (G1).

“He’s one of the cleanest horses I’ve every trained. The speed he has, this little horse, it’s just amazing what he does,” Navarro said. “He comes back after his races like he’s done nothing.”

Shancelot is being pointed to the $1.5 million Saudi Cup Sprint in Riyadh Feb. 29 with the hope he will earn his way to Dubai for a possible clash with defending champ X Y Jet in the Golden Shaheen. Both Shancelot and X Y Jet are likely to prep at Gulfstream Park during the 2019-2020 Championship Meet.

Although Navarro now has increasing opportunities to develop young horses, he will still be very active with claiming horses during the Championship Meet, especially for the Dec. 7 Claiming Crown, for which he made 20 nominations.

Stabled at both Gulfstream Park West and Palm Meadows Training Center, Navarro is confident that a Championship Meet title defense is well within the realm of possibility..

“I feel very good about it,” he said.