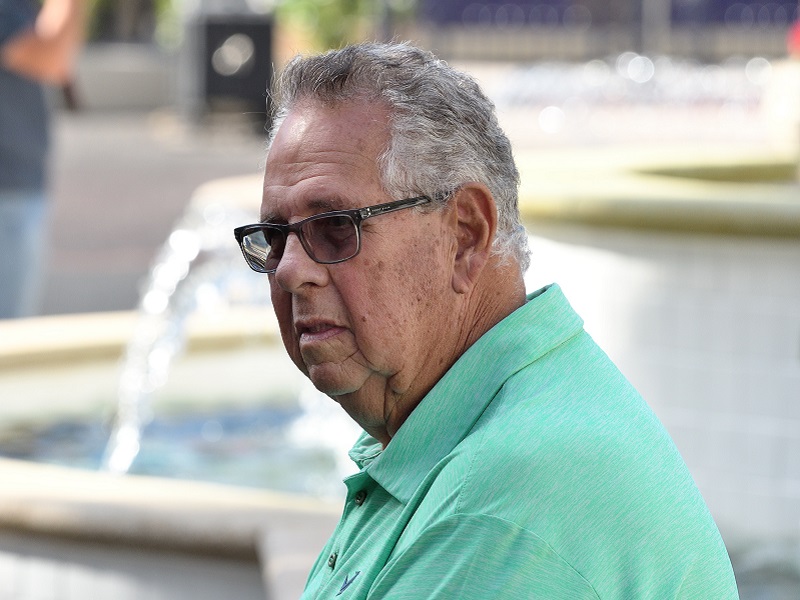 HALLANDALE BEACH, FL - When friends first began calling him “Droopy,” a nickname that stemmed from his likeness to the animated hound dog with saggy cheeks, it angered Alberto Paz Rodriguez. He would lash back in protest, only to make matters worse.

“I used to get real mad when they called me Droopy,” he said. “But when you get angry because they call you something, the more they call you that. So that was a mistake.”

That was decades ago.

Nowadays, Panama’s all-time leading Thoroughbred trainer not only embraces his nickname, but promotes it. The three horses Rodriguez brought to South Florida to represent Panama in Sunday’s Clasico Internacional del Caribe at Gulfstream Park all wear saddlecloths that spell out Droopy in white stitching.

“I introduce myself as Droopy,” Rodriguez said. “I’m proud of it.”

Rodriguez has no reason to be ashamed. With nearly 6,500 victories in Panamanian racing, Rodriguez is a giant of the sport in his home country. He won his first “Clasico del Caribe” in 1974 with Berremina, two more after that, and hopes to add a fourth victory in the Caribbean’s most prized race on Sunday with Fix in the 1 1/8-mile event for 3-year-olds.

“Horses are everything,” said Rodriguez, who turns 80 on Thursday. “Horses are a passion. I feel like I’m running myself every time I run a horse in a race. It’s a thrill, even now. Even a cheap claimer, I enjoy it the same.”

Rodriguez has long had an affection for Thoroughbred racing. The same couldn’t be said for his parents, who not only frowned on his passion, but tried to steer him away from it. His father, who was the president of Standard Oil in New Jersey, encouraged his son to follow in his footsteps as a businessman.

“They didn’t like the idea at all,” Rodriguez said of racing. “So they sent me to military school to get me away from the race track. But they made a mistake by sending me to Louisville, to the Kentucky Military Institute.”

To the heart of horse country, in other words.

Ultimately, though, Rodriguez went to the University of Alabama before transferring to Saint Bernard College in Cullman, Alabama, where he earned his degree in economics while also developing into a top golfer. Rodriguez and John Dowd, the former legal advisor to President Trump and whose investigation into betting by Pete Rose led to his lifetime banishment from baseball, were teammates on the Saint Bernard golf team.

“We had a helluva good team,” Rodriguez said.

But it didn’t take long before the pull of horses and racing became too strong for Rodriguez to resist. He bought his first horse in 1965 and never looked back.

He set up a stable in South Florida in the mid-80s due to political unrest in Panama, winning races at Gulfstream, Calder and Hialeah, before moving back to Panama once matters had settled.

In 1993, he sent El Bakan to the U.S. to race in the Kentucky Derby for new trainer Alfredo Callajas and owner Robert Perez. The colt finished next-to-last in a field of 19.

Outfitted with the equipment on Rodriguez’s advice, El Bakan returned two weeks later in the Preakness and turned in a better performance at odds of 51-1.

“He led most of the way and finished third,” Rodriguez said.

Rodriguez is hoping for winning results on Sunday. He has three horses entered on the day’s stakes card. In addition to Fix, he also intends to send out Fray Angelico in the Copa Confraternidad del Caribe and California Music in the Copa Invitacional del Caribe.

“Every race is a big deal,” Rodriguez said. “This is like the World Cup. Our horses are identified by their countries. They don’t say such-and-such a horse won it. They say the horse from Panama won it, the horse from Mexico won it. We represent the country.”