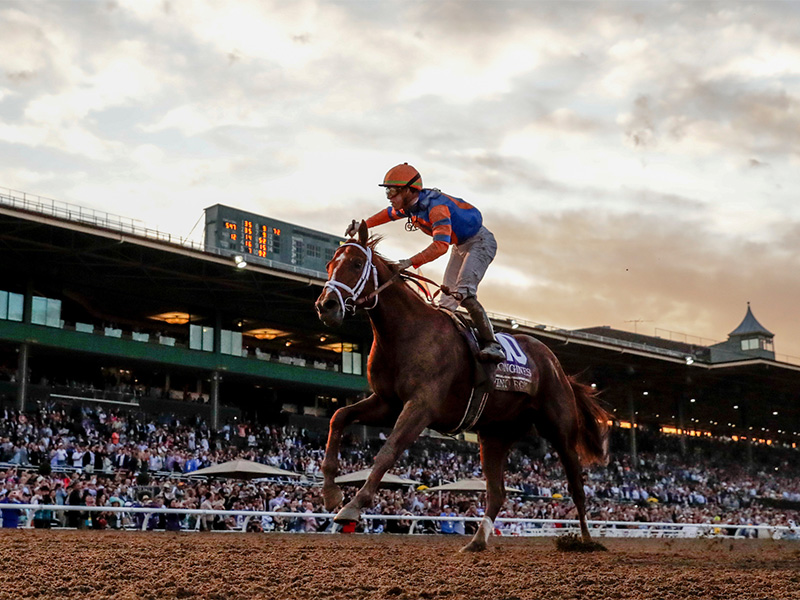 Winning trainer Todd Pletcher (Vino Rosso) – “It really wasn’t about the last race (DQ). It was about winning a Classic especially for Mike (Repole) and Vinnie (Viola) and their families.  We just felt like the last five weeks the horse has been training unbelievably well. I’ve been anxious for the race to get here and just nervous about it. It’s been a while since I came into a race of the magnitude with a horse doing this well. Every indication in his works, the way he shipped in, the way he galloped over the track. Everything was there indicating he was sitting on a lifetime best performance. So you always worry, did we ship in at the right time, but every indication was he was sitting on a big one and when it actually happens it’s very rewarding, very fulfilling, very emotional.”

“We sensed it early on this year that he was a little more mature, more focused, more into his daily training. I think it’s really a case of him getting time to develop and mature. We always felt he would be a better 4-year-old than 3-year-old. Just happy it turned out to be right.”

Winning jockey Irad Ortiz Jr. (Vino Rosso) – “He was moving in the turn so, so good. He was moving so good at McKinzie. Going into the first turn I had to use him a little bit.  Going onto the backside I said, ‘I’ve got a good chance if McKinzie is going to come back to me at the distance. That worked out good, he came back to me and my horse responded to me the way I expected him to and he won off on his own at the end.”

You said that Vino Rosso was improving with every work coming into this race:  “I really liked the way he was working going into the race. He was doing much better in the last race. I had a lot of confidence in him and you saw how he ran.”

On his day with three wins: “Special day. I think Bricks and Mortar is definitely the Horse of the Year. I’m so happy.”

Winning owner Mike Repole (Vino Rosso) – “This is unbelievable. Indescribable. We’ve won so many graded stakes, but this one feels different. Winning with Uncle Mo (Juvenile) was amazing and I knew it would take a special race to get a feeling even bigger than that. This is the one. This is the pinnacle.

“I was confident the whole way, but you always have doubts until you cross the wire. With a half mile to go maybe I thought he was a little too far back, but Irad can walk on water today. He’s done everything right so I just felt really good. This is so special.”

Is this vindication after being taken down in the Jockey Club Gold Cup? “I think it’s more that we had unfinished business. I remember saying that that loss will make this win feel 10 times better. And it really did. You have to go through adversity, and that was pretty low, to reach the highest of highs. It’s a great feeling.”

Second-place trainer Bob Baffert (McKinzie, favorite) – “He ran his race. Joel rode him well. I told him to make sure he’s in front turning for home, that’s the way he likes it. But, Vino Rosso, after watching his last race I knew he’s been getting better and better and he won here going a  mile and a quarter. He was sitting there just perfect and I knew he was going to have a lot of horse left. When Joel hit McKinzie, and I told him don’t hit McKinzie unless you’re just really out of horse because he doesn’t like it, and when he hit him, that’s when I knew that was it. But, he did a lot of running. I told my wife (Jill) all week that Vino Rosso was the horse to beat. My horse showed up and I was proud of him. McKinzie ran his race. He just got beat. Turning for home I really thought...but Vino was right back there. McKinzie ran his heart out. He showed up.”

Second-place jockey Joel Rosario (McKinzie, favorite) – “He ran great. On a couple of occasions we got slightly stopped in the run and had to take back. At the top of the stretch, I thought we might have had enough to get home, but he just got tired toward the end. I let him run a little bit on the backside just to get my spot. That might have cost him a little bit. He ran his heart out, so we can’t be too disappointed. We were just beaten by the best horse on the day.”

Third-place trainer John Sadler (Higher Power) – “We were really happy with his race. He wasn’t as good out of the gate as I would have hoped and he got away a little poorly, but I was pleased overall with  his race. He ran a good race. I think with a little better luck he could have been second. But, congrats to the winner today. The winner was the winner. He was very impressive. But, I think I could have been second with a little different trip. But, I was very happy with my horse’s race. I thought he ran really well. He didn’t get the trip but he ran well.”

Third-place jockey Flavien Prat (Higher Power) – “He didn’t feel at his sharpest today, but never the less, he ran a good race.”

Fourth-place and seventh-place trainer Bill Mott (Elate and Yoshida (JPN) – “Elate got out of position a little bit down the backside. I didn't know if she was fighting the racetrack a little bit. Mike (Smith) said that Yoshida didn't care for it whatsoever. Elate has been great. We've had her four full seasons and she's won races each year at 3, 4, 5. She's been a really great mare. We asked her to do a tough job today and she represented us well, but we couldn't get the job done.”

Fourth-place jockey Jose Ortiz (Elate) – “Elate ran her heart out. I’m very lucky that I was able to ride a filly like her.”

The trip:  “She kind of checked, backed up from the dirt on the backside. I had to stay after her, but she kept responding well around the turn and then she made a great move late. I’m just a little sad that it’s the last race for her. It’s been a great run. No complaints.”

Fifth-place jockey Ricardo Santana Jr. (Math Wizard) – “I had a good trip. My horse ran his race. These were tough horses. I think he ran a really good race.”

Sixth-place trainer Dallas Stewart (Seeking the Soul) – “He ran great, but he just got outrun. No excuse.”

Sixth-place jockey Brian Hernandez Jr. (Seeking the Soul) – “We had a good trip.  Hè was in a good position and I thought we were at least going to get a piece of it, but hè just didn’t fire.”

Seventh-place jockey John Velazquez (Code of Honor) – “He didn’t run his race today.  At the half mile pole I jiggled the reins at him and he just wasn’t interested.  I don’t know if he cared for the track or not.”

Eighth-place jockey Mike Smith (Yoshida (JPN)) – “He didn’t handle the kickback in his face and being back there. He just didn’t handle it at all.”

Ninth-place jockey Tyler Gaffalione (War of Will) – “(Trainer) Mark (Casse) and I discussed it before the race and with the addition of blinkers we weren’t going to fight him today. We were just going to let him run his race. He got a little tired. They jumped on us pretty quick. He put up a good effort.”

Tenth-place jockey Javier Castellano (Owendale) – “I saved all the ground, but he just didn’t handle the track. He didn’t appreciate all the kickback.”