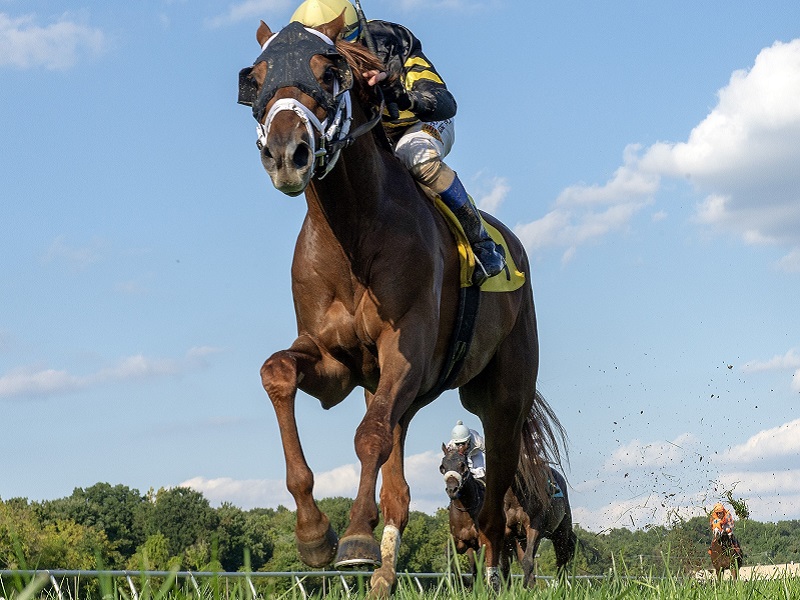 HALLANDALE BEACH, FL – Calumet Farm’s multiple stakes-winning homebred Channel Cat will back up to his shortest distance in seven months with an eye on January’s Pegasus World Cup International Day program for his next start in Saturday’s $200,000 Fort Lauderdale (G2) at Gulfstream Park.

The 63rd running of the 1 1/8-mile Fort Lauderdale for 3-year-olds and up on the grass is the richest of five stakes, four graded, worth $600,000 in purses on the 11-race program. First-race post time is noon.

Channel Cat will be making his 20th lifetime start in the Fort Lauderdale and sixth at Gulfstream, but first since an optional claiming allowance win over the turf course in March 2018. He is trained by 15-time Championship Meet leader Todd Pletcher, who also had his Eclipse Award-winning sire, English Channel.

A win in the Fort Lauderdale would push Channel Cat over $1 million in purse earnings, having banked $894,792 and become a graded-stakes winner with a front-running triumph in the 1 3/8-mile Bowling Green (G2) this summer at Saratoga. The 4-year-old colt exits the 1 ½-mile Breeders’ Cup Turf (G1) where rallied to be seventh, beaten 2 ½ lengths, by Bricks and Mortar.

“He’s training super. He came out of the Breeders’ Cup in good shape. I actually thought he ran a pretty credible race,” Pletcher said. “We’re going to shorten him up here and see how he likes that with the idea that it could put him in position to possibly go in the Pegasus Turf if he proves effective at a mile and an eighth. If not, then we’ll go back to what we know he’s had success at in the past, which is the mile and three-eighths, mile and a half-type races.”

Channel Cat has raced exclusively in graded company in 2019 after ending his sophomore season with back-to-back stakes victories 17 days apart in the Dueling Grounds Derby at Kentucky Downs and Bald Eagle Derby at Laurel Park.

He was fifth to Bricks and Mortar in the Manhattan (G1), beaten less than a length when third behind Hunter O’Riley in the United Nations (G1), and ran third in the Sword Dancer (G1) and fourth in the Joe Hirsch Turf Classic (G1). Channel Cat hasn’t raced at shorter than 1 3/8 miles since opening this year finishing fourth in the 1 1/8-mile Fort Marcy (G3) May 4 over a soft Belmont Park course.

“He’s run against the best horses on the East Coast all year and has certainly shown that, on his day, he fits with the best of them,” Pletcher said. “We’re just hoping he can shorten up a little bit and be as effective at a mile and an eighth.”

Pletcher is a two-time winner of the Fort Lauderdale, with Mshawish in 2015 and Silver Medallion in 2012. Hall of Fame jockey John Velazquez is named to ride from Post 5 of nine at 126 pounds, sharing topweight with Grade 3 winner Marzo.

“He seems to be the kind of horse that runs over any ground,” Pletcher said. “He won over a complete bog at Laurel before and he’s won over firm ground, as well, so he’s very honest. He always shows up [and] tries hard, so we’re hoping he can do that on Saturday.”

Trainer Brian Lynch won the 2016 Fort Lauderdale with Heart to Heart, a 13-time stakes winner of more than $2 million in purse earnings whose first of two Grade 1 wins among 11 graded victories came in the 2018 Gulfstream Park Turf.

Lynch entered two for Saturday’s renewal, Amerman Racing homebred Admission Office and Spooky Channel who, like Heart to Heart, is owned by Terry Hamilton. Spooky Channel, also by English Channel, put together a five-race win streak this winter and spring at Turfway Park, two of them in stakes, but has not raced since finishing seventh in the Arlington Handicap (G3) July 13.

Admission Office is still seeking his first career stakes win, having come within a half-length three times this year – the May 18 Dixie (G2) at Pimlico, June 15 Wise Dan (G2) and Nov. 16 River City Handicap (G2), both at Churchill Downs. He found trouble in both the Dixie and Wise Dan, and was unable to make up enough ground after racing far back in the River City.

“He’s a very talented horse and we’re just waiting for a breakthrough race for him,” Lynch said. “He’s just been one of them guys where if there’s a way for him to get shuffled back, get a wide trip, get stuck inside, get stopped, he’s found a way how to do it. We’d like to see him one of these days get a clean trip.”

Admission Office tuned up for the Fort Lauderdale with a bullet five-furlong work in 59.75 seconds Dec. 7 on the turf at Palm Meadows, Gulfstream’s satellite training facility in Palm Beach County. He has finished third or better in eight of nine lifetime starts.

“I’m waiting for that big, breakthrough race where he gets his head in front on the wire, but he’s been a model of consistency for certain,” Lynch said. “This sort of turf course here, we’re going to get a genuine pace to run at so we look forward to running him. I think the mile and an eighth is right up his alley.”

Castleton Lyons’ Up the Ante returns to action for the first time since finishing fourth by less than a length in the one-mile Baltimore-Washington International Turf Cup (G3) Sept. 21 at Laurel Park. Trainer Christophe Clement won the Fort Lauderdale with Summer Front (2014) and Statesmanship (1998).

“He’s training well,” Clement’s son and assistant, Miguel, said. “He’s going into this race with no setbacks in his preparation.”

OXO Equine’s Instilled Regard, fourth as an 85-1 long shot behind eventual Triple Crown winner Justify in the 2018 Kentucky Derby (G1), is entered to make his fourth career start on turf. The Arch colt returned from a six-month break between races to be third by a half-length in a 1 1/16-mile optional claiming allowance Nov. 9 on the grass at Aqueduct.

Mike Maker-trained stablemates Marzo, winner of the Sycamore (G3) two starts back, turf and dirt stakes winner Exulting and Cross Border, a winner of four of his last five starts; and Flavius, making just his fifth career start and second in North America, complete the field.