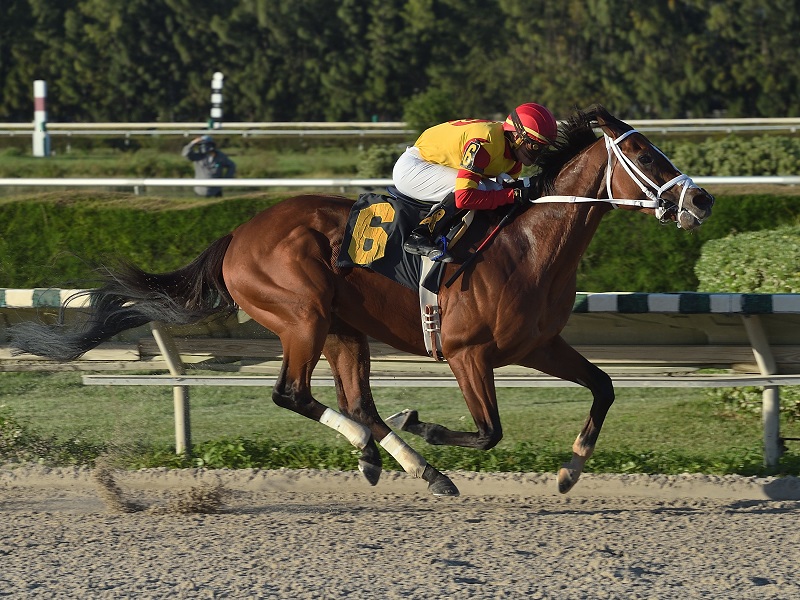 HALLANDALE BEACH, FL – Bodexpress is poised to make his return to graded-stakes competition at Gulfstream Park, where the fan favorite 3-year-old colt is scheduled to face seven rivals in Saturday’s $100,000 Harlan’s Holiday (G3).

The Pegasus World Cup Invitational (G1) at Gulfstream Park Jan. 25 is the ultimate goal for the son of Bodemeister.

“If he finishes first or second, he’ll go to the Pegasus – that is my plan,” said trainer Gustavo Delgado, who owns Bodexpress with Top Racing LLC and Global Thoroughbreds LLC.

The Harlan’s Holiday, a mile stakes for 3-year-olds and up, will be one of five stakes, including four graded stakes, on Saturday’ 11-race card at Gulfstream that gets under way at noon.

Bodexpress earned his way into this year’s Kentucky Derby (G1) with a second-place finish behind Maximum Security in the $1 million Xpressbet.com Florida Derby (G1) as a 71-1 maiden. The Kentucky-bred colt stalked the early pace before being taken up on the turn into the homestretch and finishing 14th in the Derby. Bodexpress never game himself a chance in the Preakness (G1) two weeks later, rearing in the starting gate and unseating jockey John Velazquez.

Bodexpress was subsequently taken out training and sent to Ocala, FL to regroup.

Although demonstrating considerable talent in the Florida Derby and a prior second-place finish by a neck to future graded-stakes winner Shancelot, Bodexpress’ pre-race behavior had been less than exemplary. Since his return to racing, he has shown improved pre-race behavior that has resulted in back-to-back victories, a maiden-breaking three-length win in October and a record-breaking score in an optional claiming allowance in November. Bodexpress shattered an 18-year-old track record for a mile at Gulfstream Park West while drawing off to win by 6 ¾ lengths in his second victory.

“The horse has been good since he went to the farm,” Delgado said. “The best decision after the Preakness Stakes was to send him to the farm. It was good for him. He’s come back strong and more focused.”

Emisael Jaramillo has the return mount.

Like Bodexpress, Daniel McConnell’s Prince Lucky could earn chance to run in the Pegasus World Cup with a strong performance in the Harlan’s Holiday.

Prince Lucky was a back-to-back graded-stakes winner at Gulfstream during the 2018-2019 Championship Meet, The Todd Pletcher-trained 4-year-old gelding captured the Hal’s Hope (G3) by six lengths and the Gulfstream Park Mile (G2) by 4 ¾ lengths, both at the one-turn mile distance.

Most recently, the son of Corinthian finished fourth behind victorious Maximum Security in the seven-furlong Bold Ruler (G3) at Belmont Park.

“Seven furlongs is a bit short for him. I think he’s probably at his very best at a one-turn mile, but we were sort of in a spot where we didn’t have too many options,” Pletcher said. “He’s another horse that’s had success at Gulfstream.”

“He was two-for-two early in the year here, so we were thinking if he could be a Pegasus horse, then how would we get there?” Pletcher said. “We felt like the Bold Ruler was sort of a bridge to get us to the Harlan’s Holiday, and that will be an opportunity for him to run two turns at Gulfstream for the first time and see how he handles that and see if he earns his way into a positon in the Pegasus.”

Hall of Famer John Velazquez, who was aboard for last season’s back-to-back graded-stakes scores, has the mount.

Imaginary Stables and Glenn Ellis’ War Story, who has earned $2.9 million during his 37-race career, is scheduled to make his first start for trainer Elizabeth Dobles. The 7-year-old gelding, who ran in the 2018 Pegasus World Cup without success, achieved a career high while winning the 2017 Brooklyn Invitational (G2) at Belmont.

The son of Northern Afleet, who most recently finished second in the Greenwood Cup (G3) at Parx, is scheduled to be ridden by Luis Saez, who scored aboard for his triumph in the Monmouth Cup (G3) three starts back.

Multiple graded stakes-placed Realm is set to seek his first success in a graded-stakes in the Harlan’s Holiday. Owner by trainer Barclay Tagg, Eric Dattner, and Harry Astarita, the 6-year-old gelding, who has been second or third in four graded-stakes, will be ridden by Julien Leparoux.

Equine Authority Inc.’s Red Crescent, the winner of the Millions Classic Preview at Gulfstream Park West last time out; Marianne Stribling, Force Five Racing LLC and Two Rivers Racing Stable LLC’s Phat Man, who won the Good Magic Stakes at Monmouth two starts back; Flying P Stable’s Flowers for Lisa, the 2017 Claiming Crown Jewel winner who was stakes-place in his most recent start at Delaware Park; and Steve Budhoo’s Eye of a Jedi, a stakes winner at Gulfstream two starts back; round out the field.