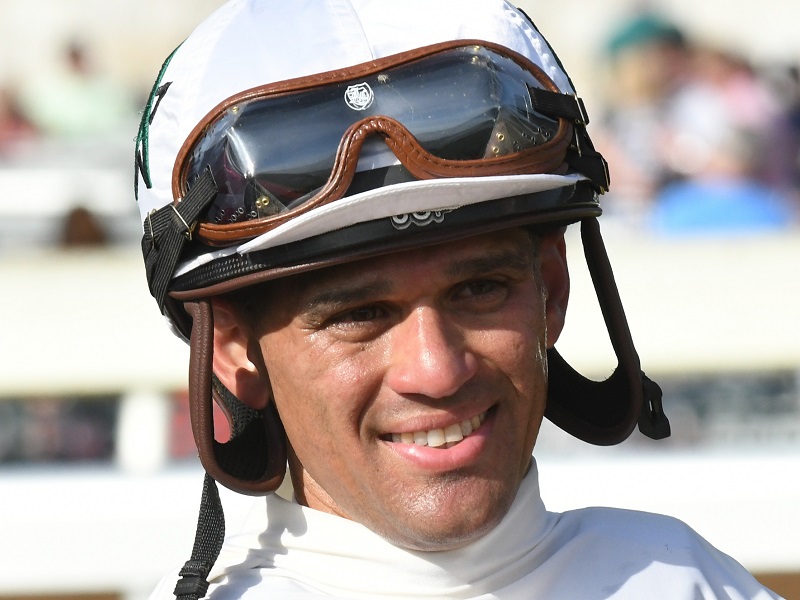 ARCADIA, Calif. (Dec. 12, 2019) — Santa Anita Park has announced a distinguished group of five finalists for the 2020 George Woolf Memorial Jockey Award, with the winner to be announced in February. One of the most prestigious honors in all of American racing, the Woolf Award, which is determined by a vote of jockeys nationwide, can only be won once.

Presented annually by Santa Anita since 1950, the Woolf Award recognizes those riders whose careers and personal character garner esteem for the individual and the sport of Thoroughbred racing. The trophy is a replica of the life-sized statue of legendary Hall of Fame jockey George Woolf, which adorns Santa Anita’s Paddock Gardens area.

Woolf, who won the inaugural Santa Anita Handicap aboard Azucar on Feb. 23, 1935 and who  gained further international fame when he piloted the immortal Seabiscuit to victory over Triple Crown Champion  War Admiral in a 1 3/16 mile match race at Pimlico Race Course in Baltimore, MD., on Nov. 1, 1938, was regarded as one of the top big-money riders of his era.  Known affectionately as “The Iceman,” he was revered by his fellow riders, members of the media and fans across America as a fierce competitor and consummate professional.

America’s Eclipse Champion Apprentice Jockey in the year 2000, Tyler Baze was born on Oct. 19, 1982 in Seattle, WA. The son of a former jockey, Earl, Baze hails from a legendary racing family that has also produced North America’s all-time leading rider, Russell Baze (2002 Woolf Award winner), who is Tyler’s second cousin and a retired member of racing’s Hall of Fame.  Tyler’s uncle, Gary Baze, was also a top rider, primarily in the Northwest.

With a work ethic that is second to none, Baze, who is currently based in Southern California, has consistently endeared himself to horsemen and fans alike as a tireless competitor that comes to work ready to ride. With more than 2,600 career wins to his credit, Baze has overcome personal adversity and become a true credit to his profession.

Arguably America’s most successful jockey over the past decade, Javier Castellano is a four-time Eclipse Award winner who was also the nation’s leading rider by money-won in each of his Eclipse Award-winning seasons, 2013, 14, 15 and 2016. Based on the east coast, Castellano was born Oct. 23, 1977 in Maracaibo, Venezuela and began riding full-time in 1996. Currently ranked third in 2019 purse earnings with $24.1 million, Castellano, who was elected to racing’s Hall of Fame in 2017, now has more than 5,200 career wins.  With career purse earnings of $341 million, Castellano is America’s second leading all-time money-winning jockey, behind only fellow Hall of Famer Johnny Velazquez, who has banked $414 million.

A 48-year-old native of Portsmouth, Virginia, Chris Emigh (pronounced Eh-mee) has been one of the most productive jockeys in the Chicago area for more than 20 years.  A seven-time leading rider at Hawthorne Race Course, he topped the jockey standings at Arlington Park in 2006.  Emigh broke his maiden at age 18 in 1989 at Evangeline Downs in Louisiana and now has more than 4,000 career victories.  Consistent, hard working and readily accessible to media, Emigh is one of the Windy City’s  most highly respected riders.

A 40-year-old native of Dublin, Ireland, James Graham has an enthusiasm for racing that has helped propel him to major successes while riding primarily in Chicago, Kentucky and Louisiana. A two-time leading rider (2011 & 14) at Arlington Park, Graham was consistently among the leaders at the Chicago area track dating back to 2004. The meet’s leading rider this past summer at Ellis Park, Graham has currently committed to a year-round schedule centered on Fair Grounds in New Orleans, Keeneland, Churchill Downs and Ellis. With more than 2,500 career wins to his credit, Graham’s mounts have earned nearly $85 million.

A major force at Mahoning Valley Race Course in Youngstown Ohio and at Thistledown near Cleveland, Luis M. Quinones is currently in a pitched battle with Irad Ortiz, Jr. for national leading rider honors in terms of races won. With more than 300 victories to his credit, Quinones will no doubt try to stay as busy as he possibly can through the end of the month. Born March 26, 1979 in Puerto Rico, Quinonez is currently atop the standings at Mountaineer Park in New Cumberland, West Virginia, and was leading rider at this year’s Mahoning Valley Winter/Spring Meet.

The 2019 Woolf Award was won by veteran jockey Scott Stevens and the 2020 winner will be announced in February.