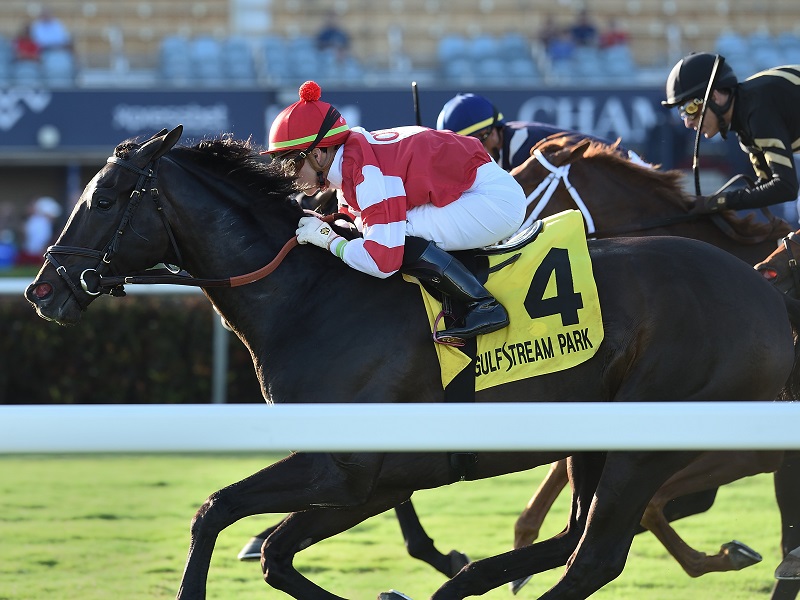 HALLANDALE BEACH, FL – OXO Equine’s Instilled Regard, a graded-stakes winner on dirt as a 3-year-old, matched the feat on turf before the end of his 4-year-old season thanks to a heady ride from reigning Eclipse Award winner Irad Ortiz Jr. in Saturday’s $200,000 Fort Lauderdale (G2) at Gulfstream Park.

Instilled Regard ($8.60) completed the distance in 1:47.18 over a firm course to snap an eight-race losing streak dating back to his triumph in the LeComte (G3) on the 2018 Triple Crown trail that ended for the Arch colt after finishing fourth to eventual Triple Crown champion Justify in the Kentucky Derby (G1).

“This is the same horse that showed up for me [at 85-1] on Kentucky Derby day a year ago. I knew I had a better horse than that that day, and we ended up beating a lot of great horses,” OXO Equine’s Larry Best said. “This is a real horse.

“He needed some time to mature a little bit. We knew he’d be better as a 3- and 4-year-old,” he added. “He’s fresh off the layoff, and this is the kind of race we needed to think about to go on to bigger things.”

Sent off at 3-1 in a field of nine, Instilled Regard settled in third along the rail as Cross Border went the opening quarter-mile in 24.63 seconds pressed on the outside by his stablemate, Sycamore (G3) winner Marzo. Up the Ante joined the top group four wide for a half that went in 49.22.

Ortiz was still stuck behind horses midway on the turn after a six-furlong split of 1:12.60, but had plenty of room between Marzo and Up the Ante once straightened for home to set Instilled Regard down for a drive to the wire and was able to hold off late bids from Admission Office, who finished second, and the 2-1 favorite Channel Cat, who wound up third.

“I got a perfect trip,” Ortiz said. “My horse broke sharp and I used him a little bit to be close. I didn’t want to be too far and he put me in the right position. I was just waiting for the hole and finally at the end turning for home I got through and you could see how [he took off].”

Instilled Regard, purchased for $1.05 million as a 2-year-old in training in March 2017, earned his third win from 14 career starts with purse earnings of nearly $600,000. The Fort Lauderdale marked his first victory in four grass attempts, to go along with one second and two thirds.

Instilled Regard was beaten less than a length in his previous start Nov. 9, a 1 1/16-mile optional claimer on the Aqueduct grass, his first race following a distant sixth in the May 3 Alysheba (G3) on dirt. He was trained early in his career by Hall of Famer Jerry Hollendorfer.

“He’s got a great pedigree. His grandmother is Heavenly Prize,” Best said. “We finally got the conditioning up and I got the right man to ride the horse. Over and above that, we had a lot of good luck.”