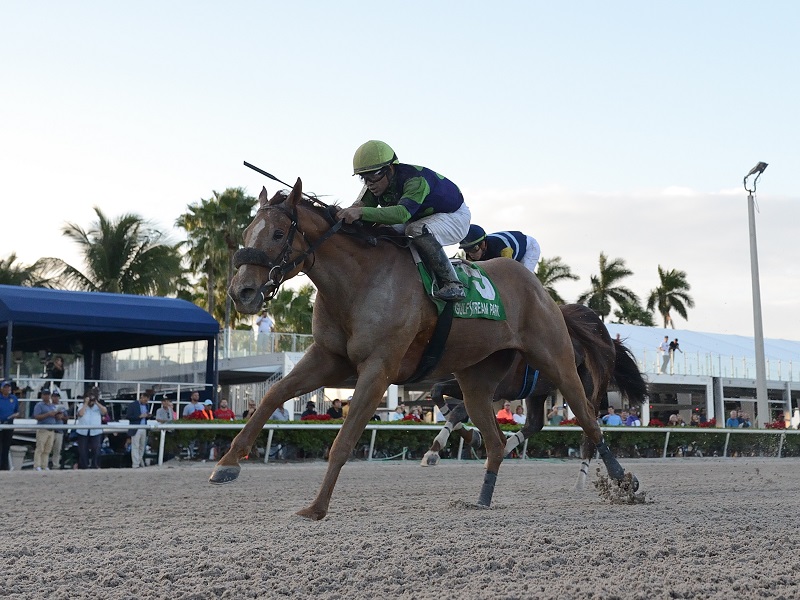 “We may get an invite for the Pegasus,” Guarnere said. “He doesn’t traditionally run well at this track, but after that...If we get an invite, we’ll go.”

War Story, who finished off-the-board in the 2018 Pegasus World Cup, lagged off a heated early pace between Bodexpress, the even-money favorite, and Prince Lucky, the 6-5 second betting choice. Bodexpress ran the first quarter in 22.82 seconds before Prince Lucky to his inside took a misstep and was pulled up by jockey John Velazquez. The favorite continued to show the way past a half-mile in 46.14 before being challenged by Red Crescent on the turn into the homestretch. Under an aggressive ride by Luis Saez, War Story mounted a wide rally through the stretch to prevail by 1 1/2 lengths in 1:42.45.

“He’s a horse you have to keep busy all the way. At the half-mile pole, he responded to me. In the stretch, he switched leads and took off,” Saez said.

“It’s exciting. Like every other race I win, it’s a pleasure,” Dobles said. “He’s a hard-knocking horse.”