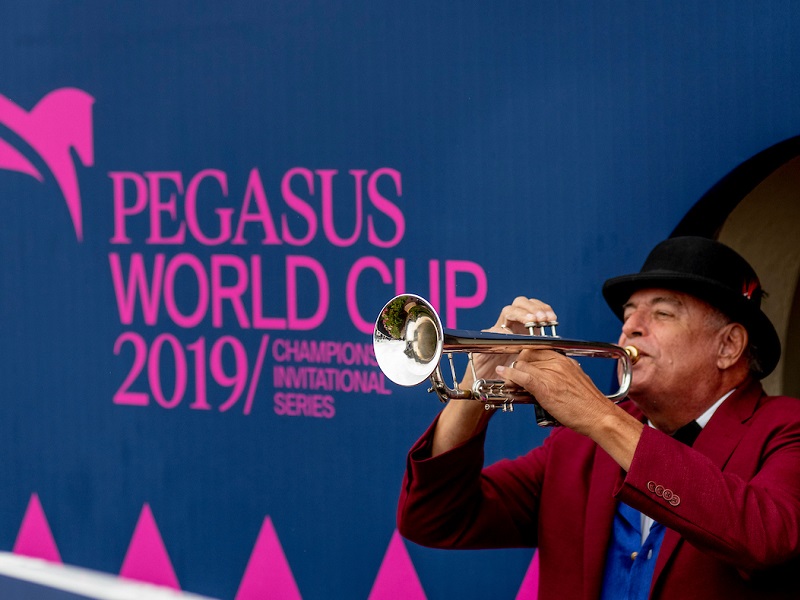 The fourth running of the 1 1/8-mile Pegasus, won previously by Longines World’s Best Racehorse Arrogate (2017), Horse of the Year Gun Runner (2018) and Breeders’ Cup Mile (G1) winner City of Light (2019), will be run Saturday, Jan. 25 along with the second running of the Pegasus World Cup Turf (G1).

Omaha Beach, who shipped from California to Gulfstream Park on New Year’s Eve, is trained by Richard Mandella and ridden by Mike Smith. The son of War Front was favored in the Kentucky Derby off victories in the Arkansas Derby (G1) and Rebel (G2) before being scratched three days before the race because of complications from an entrapped epiglottis. The 4-year-old colt returned in the fall to win the Santa Anita Sprint Championship (G1) and finish second in the Breeders’ Cup Dirt Mile (G1). He enters the Pegasus off an impressive victory Dec. 28 in the Malibu (G1) at Santa Anita.

Maximum Security, undefeated in four starts at Gulfstream, broke his maiden Dec. 20, 2018 at Gulfstream under a claiming tag. The 4-year-old would go on to win the Florida Derby before being the only horse in the history of the Kentucky Derby to be disqualified from first on race day. The Jason Servis-trained colt would go on to win the Haskell Invitational (G1), Bold Ruler (G3) and Cigar Mile (G1). The colt is currently training at Gulfstream’s satellite training facility Palm Meadows in Palm Beach County.

McKinzie, trained by Bob Baffert, who conditioned inaugural Pegasus winner Arrogate, has earned more than $3 million and is a four-time Grade 1 winner. Second in the Breeders’ Cup Classic (G1), the 5-year-old won the Whitney (G1) last summer at Saratoga. McKinzie’s stablemate, Roadster, has also been invited to the Pegasus. Winner last year of the Santa Anita Derby (G1), the 4-year-old colt has since finished second in the Malibu and Affirmed (G3).

Spun to Run, a 4-year-old son of Hard Spun who defeated Omaha Beach in the Breeders’ Cup Dirt Mile, followed that performance with a second-place finish behind Maximum Security in the Cigar Mile. The colt also won last year’s Smarty Jones (G3) and was third in the Haskell.

Higher Power would enter the Pegasus off a third-place finish in the Breeders’ Cup Classic. The 5-year-old previously won the Pacific Classic (G1) at Del Mar and finished third in the Awesome Again (G1) at Santa Anita. Higher Power is a son of Medaglia d’Oro and a winner of $1.376 million.

Graded-stakes winner Tax has raced against the best during his career. A winner of the Jim Dandy (G2) last year at 3 and the Remsen (G2) at 2, the Danny Gargan-trained 4-year-old was second last year in the Discovery (G3) and Wood Memorial (G2) and fourth in the Belmont (G1).

Locally-based Math Wizard, a former claimer trained by Saffie Joseph Jr., was fifth last time out in the Breeders’ Cup Classic. He previously won the Pennsylvania Derby (G1) and was second in the Ohio Derby (G3).

Mr Freeze, trained by Dale Romans, finished third last time out in the Clark (G1). The 5-year-old won the Ack Ack (G3) in September at Churchill Downs and was second in the Fayette (G2) in October at Keeneland.

Seeking the Soul is hoping the third time in the Pegasus will be the charm. The 7-year-old finished second to City of Light in last year’s Pegasus and was fifth in the 2018 edition. Winner of the 2017 Clark and second in the 2018 Breeders’ Cup Mile (G1), the 7-year-old is being prepared at Fair Grounds with trainer Dallas Stewart.

War Story, a son of Northern Fleet who has earned nearly $3 million, was a winner last time out of the Harlan’s Holiday (G3) at Gulfstream. He was fifth in the inaugural Pegasus World Cup. Mucho Gusto, trained by Baffert, finished third last summer in the Travers.

The 2020 Pegasus World Cup Championship Invitational Series will be broadcast live on NBC from 4:30-6:00pm EST on Saturday, January 25th.

For more information on the Pegasus World Cup and tickets go to PegasusWorldCup.com.