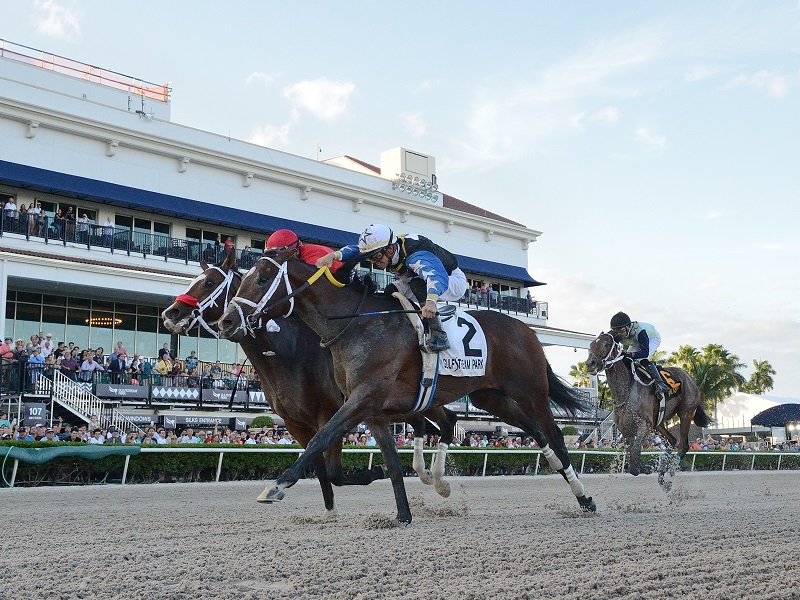 Making his first start in open company after dominating the Florida Sire Stakes series, Chance It scored as the 3-5 favorite in a well-balanced field of seven 3-year-olds to give a third straight stakes victory to Gaffalione, who came into the one-turn mile stakes off winning rides aboard Sound Machine in the Glitter Woman and She’s My Type in the Ginger Brew.

“Today is great. This is the one I needed, though. If he got beat, I wouldn’t sleep,” said Joseph with tears of joy in his eyes. “I thought he was beat at the eighth pole, I really did. He switched leads and he just dug in for that something extra. That’s the heart of a champion. I don’t want to call him a champion, because he has to earn it, but that’s the quality of a horse that becomes a champion.”

Chance it saved ground along the rail as Smash Factor opened up a clear lead along the backstretch under Jose Ortiz, stalked by As Seen On Tv with Paco Lopez aboard. Gaffalione bided his time around the far turn before making a decisive move inside of tiring Smash Factor entering the stretch to set up the dramatic stretch duel that resulted in a hard-fought victory.

“He broke well, there were a couple horses in front. Paco was keeping an eye on us so I sat inside and had to wait. I was wanting to get outside of him but he was keeping an eye on us during the race. Jose stayed a little off the fence and I knew Paco wasn’t going to let me out so I took my shot and went inside,” Gaffalione said. “My horse fought gamely. Saffie did an incredible job. He’s been off since December. He did a great job.”

As Seen On Tv’s trainer lodged an objection against the winner that was disallowed by the steward following a review. Sole Volante closed late to finish a distant third under Luca Panici.

Chance It, who finished second in his June 1 debut, bounced back to offer a brilliant 9 ¼-length triumph at Gulfstream June 29. The Florida-bred colt won the 5 ½-furlong maiden special weight race at Gulfstream in 1:03.95 while being wrapped up in the stretch, earning the fastest speed figure in the country produced by a 2-year-old at the time and one that he matched in the Dr. Fager.

“I’m so proud of this horse. I’m glad we had him fit enough because I knew he would have to belly down, and he did belly down,” Joseph said. “He’s a special horse. Most horses would lay down there, especially off a layoff. The horse on the outside [As Seen On Tv] I have a lot of respect for; he’s obviously a good horse. Chance It is just special. Hopefully he comes back good. He’s the best horse I’ve ever had in my life.”

With his victory in the Mucho Macho Man, in which he ran the one-turn mile in 1:35.53, Chance It stamped himself as a strong contender on the Road to the March 28 Florida Derby.

“There’s the Holy Bull and the Fountain of Youth. We’ll decide which one we want to go to. We have plenty of options but I want to stay home,” Gulfstream-based Joseph said. “We’ll see which way we want to go.”