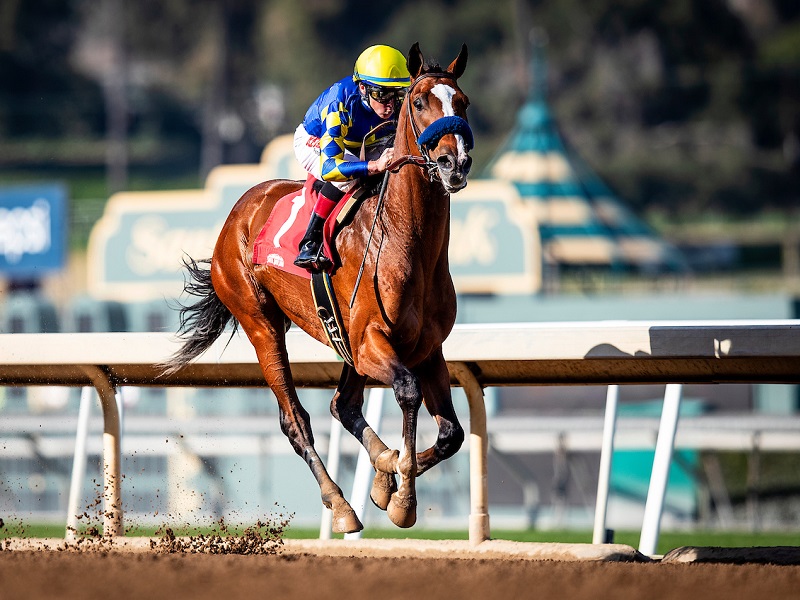 ARCADIA, Calif. (Jan. 4, 2020) — Although extremely green late, Bob Baffert’s Authentic stamped himself as a top tier Derby contender with a powerful gate to wire triumph in Saturday’s Grade III, $100,000 Sham Stakes at Santa Anita.  Ridden by Drayden Van Dyke the Kentucky-bred colt by Into Mischief got a flat mile in 1:37.57.

Sent from his rail post position, Authentic was all business on the front end until he approached the furlong pole, when he began to race erratically, altering course and nearly brushing the inner rail inside the sixteenth pole.

“I think the noise from the crowd made him react the way he did there in the stretch,” said Van Dyke, who had ridden Authentic to his maiden victory going 5 ½ furlongs at Del Mar Nov. 9.  “His ears went toward the crowd, so I think that’s what caused it, but when he got down to the rail, he spooked himself again.

“I told Bob when he broke his maiden he was my favorite 2-year-old.  He’s very talented.”

“When I ran him the first time down at Del Mar, he was a little bit green that day, because I was debating whether or not to put blinkers on him,” said Baffert.  “I didn’t, but he may need something to keep him a bit more focused.

“He’s a really good horse, he’s really talented and that’s why I always work him by himself.  When you got a good one like this they are just easier to train.  He is just growing into himself, he’s like a gazelle…He’s all legs.  Today, he wasn’t blowing hard after the race and didn’t take a deep breath, so that is a good sign.”

Owned by SF Racing, LLC, Starlight Racing, Madaket Stables, LLC Hertrich, III, John D. Fielding and Golconda Stables, Authentic, who is out of the Mr. Greeley mare Flawless, picked up $60,000 for the win, increasing his earnings to $91,200.

Authentic also picks up 10 Kentucky Derby qualifying points, with four points to the second place finisher, two to third and one to fourth.

Baffert, who has now won the Sham a record six times, also saddled the second place finisher, Azul Coast, who was last early and rallied nicely through the lane to finish 1 ½ lengths in front of Zimba Warrior.

Third early, Zimba Warrior was second turning for home and proved third best on the day, finishing three quarters of a length clear of Taishan.  The biggest price in the field at 33-1 with Jose Valdivia, Jr. up, Zimba Warrior paid $5.40 to show.

Named for the winner of the 1973 Santa Anita Derby, today’s Sham Stakes trophy was presented by his regular rider, retired Hall of Famer Laffit Pincay, Jr., who turned 73 this past Sunday.

DRAYDEN VAN DYKE, AUTHENTIC, WINNER: “The main thing was getting out of the gate; once we did it was a nice trip. I took the lead and I wasn’t going to go too fast but I’m happy I got the trip I did.

“I told Bob when he broke his maiden (Nov. 9) he was my favorite two-year-old. He’s very talented. I think the noise from the crowd made him react the way he did there in the stretch. His ears went toward the crowd, so I think that’s what caused it, but then when he got down to the rail, he spooked himself again.”

JOEL ROSARIO, AZUL COAST, SECOND: “He got a lot of dirt in his face early and then he came running. He’ll move forward off of this.”

BOB BAFFERT, AUTHENTIC, WINNER AND AZUL COAST, SECOND: “We thought if he’s a good horse, he should win. That’s what you’re hoping for, the way he was working and all. Drayden (Van Dyke) has always been really high on him. I joked with him when he came back. I said, ‘Do you think he’s a little bit too much horse for you? No, no, no he’s not!’

“You want to see him run like that, especially this time of year. We’ve got some other ones back there, hopefully they’ll come along, but the timing is good for him now to run in the March race, whatever it is (Grade II, $400,000 San Felipe Stakes at 1 1/16 miles on March 7).

“He saw the crowd (when he lugged in midstretch). We had a decent crowd today. He saw something, but he’s never really acted that way before. He was just out there by himself and didn’t know what was going on . . . he wanted to throw the brakes on.’

“I thought he was the quickest horse in the race. He won going 5 ½ in one oh three and change. He moves like a gazelle. He’s real light, he’s leggy. It was a big move forward. The second race is the toughest one to make.

“When I ran him the first time at Del Mar he was a little bit green that day, because I was debating whether or not to put blinkers on him. I didn’t, but he may need something to keep him more focused . . . Today he wasn’t blowing hard after the race and didn’t take a deep breath so that is a good sign.

“Azul Coast ran a decent race. He’s better than that. He got a little sick on me after Los Alamitos. He lost some time, lost some weight, but he ran second because he’s a class horse. He’ll move up after that.”

Asked about Derby hopefuls: “Whichever one won that day is your Derby hopeful. That’s the way it works in this business. He’s got 10 points (see note below).”

NOTES: The winning owners are SF Racing, LLC, Starlight Racing or Madaket Stables, LLC, et al. The winning horse gets 10 qualifying points to the Kentucky Derby on May 2. Second is worth four points, third two and fourth one point.