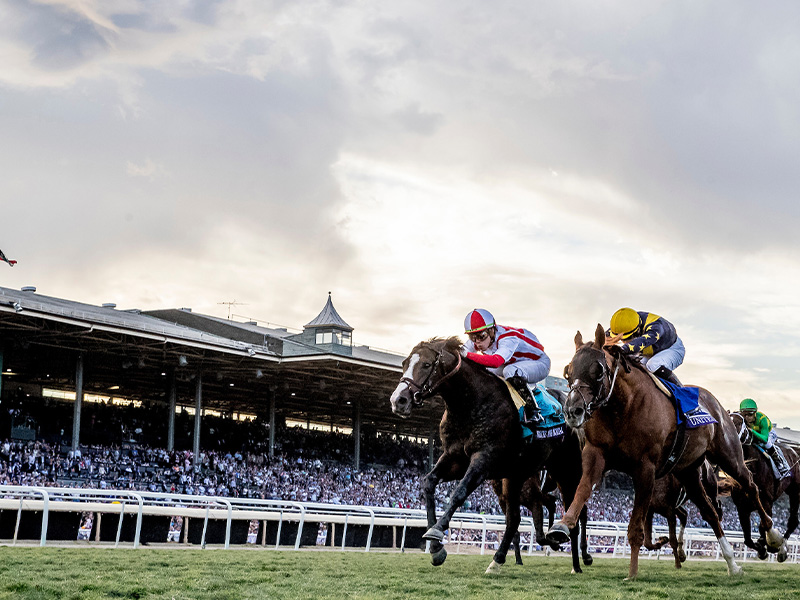 ARCADIA, Calif. (Nov. 2, 2019) – Klaravich Stables and William Lawrence’s even-money favorite Bricks and Mortar ($4) outdueled 50-1 longshot United by a head to win the 36th running of the $4 million Longines Breeders’ Cup Turf for 3-year-olds and up Saturday afternoon at Santa Anita.

Trained by Chad Brown and ridden by Irad Ortiz Jr., Bricks and Mortar completed the mile and a half on a firm turf course in 2:24.73. The victory was the third of the weekend for Brown and Ortiz and the first in the Longines Turf. It is Brown’s 15th Breeders’ Cup victory and the eighth for Ortiz.

Acclimate set the pace with United tracking in third next to the rail and Bricks and Mortar a few lengths further back in mid-pack. Coming into the stretch, United cut the corner while Bricks and Mortar launched a six-wide move.

Those two burst clear of the pack at the sixteenth pole with Bricks and Mortar prevailing in the run to the finish line.

Bricks and Mortar is a 5-year-old Kentucky-bred son of Giant’s Causeway out of the Ocean Crest mare Beyond the Waves. A winner of seven consecutive starts and all six in 2019 with Ortiz aboard, Bricks and Mortar picked up $2,200,000 for the victory and boosted his earnings to $7,085,650 with a record of 13-11-0-2 with five Grade 1 victories.