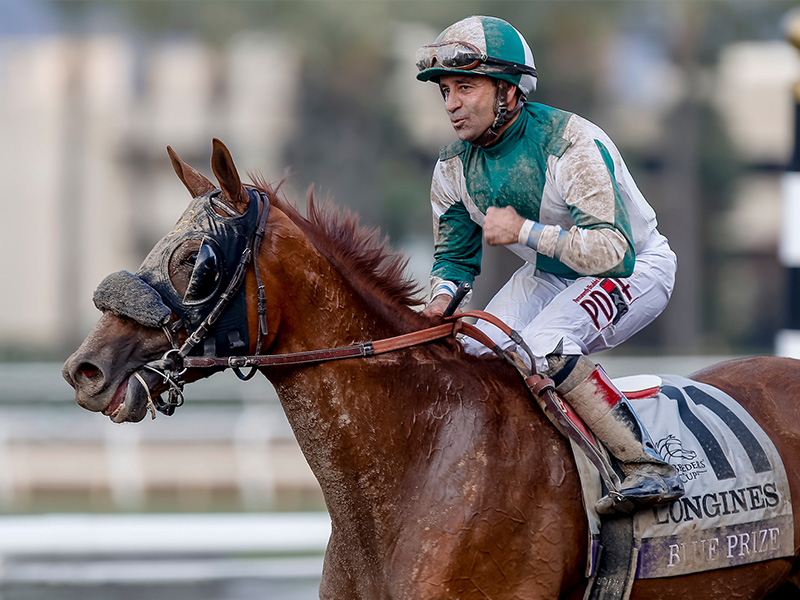 Second-place trainer Steve Asmussen (Midnight Bisou, beaten favorite) – “Nothing Midnight Bisou does for us is disappointing. She had a tremendous amount to overcome with all the dirt she took early. A quality filly best her and got first run on her around the turn. It took Mike (Smith) quite a bit to get her out it that just left her too much to do. The filly came back completely covered (in dirt) and she’s such a champion that she never gave up. She continued to run and I’m unbelievably proud of her. She’s unbelievable. There is no give up in her.  For her to keep coming under those circumstances is unbelievable because around the turn she looked hopeless. But, she just showed her class. She kept coming.”

Second-place jockey Mike Smith (Midnight Bisou, beaten favorite) – “It would have been nice to have been in the clear and taken a long run at it. I was bottled up. It’s hard to do on this track right now. The kickback is awful. I’m covered. She took a lot of it, where the winner was clear and got a good long run on me. It’s just hard to come back and catch them on this track right now. It’s safe, which is a good thing, it’s the main thing, but it’s hard to make up ground.”

During the race did you realize it was going to be tough: “Yes. Going into the far turn she had already had enough of that kickback and was struggling a bit. But, she’s just got so much class. When I finally got her out she took another big breath and gave it a go. She tried hard. I was proud of her.”

Third-place jockey Flavien Prat (Serengeti Empress) – “She’s a filly that likes to be in front.  We made the lead from a difficult outside post and she relaxed very nice for me.  We just got best by two very good older mares. She ran very well.”

Trainer Chad Brown (Dunbar Road, fifth and Wow Cat, seventh) – “Both horses seemed to be struggling with the track. The jockeys got back to me and said they were climbing a bit and were never really involved. Dunbar Road made an admirable effort and we were able to pick up some pieces. Jose (Ortiz) said, as Irad (Ortiz Jr.) did, that they never really got ahold of the track. Dunbar Road will head down to Florida and point to next year and Wow Cat is in the Fasig-Tipton sale.”