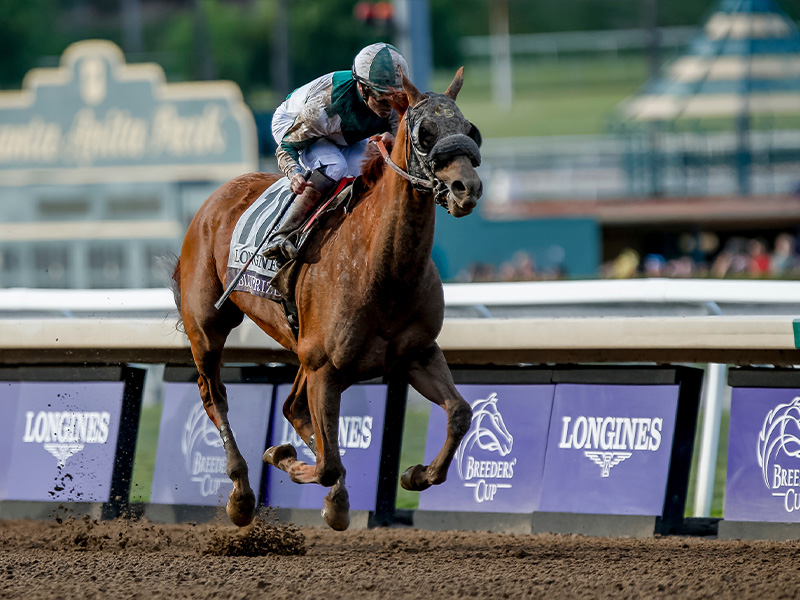 ARCADIA, Calif. (Nov. 2, 2019) – Merriebelle Stable’s Blue Prize ($19.80) surged to the front at the eighth pole and then held off a bid from even-money favorite Midnight Bisou by 1 1/2 lengths to win the 36th running of the $2 million Longines Breeders’ Cup Distaff for fillies and mares Saturday afternoon at Santa Anita.

Trained by Ignacio Correas IV and ridden by Joe Bravo, Blue Prize covered the mile and one-eighth on a fast main track in 1:50.50. It is the first Breeders’ Cup victory for Correas and Bravo.

Serengeti Empress shot out to an uncontested lead with Paradise Woods, Mo See Cal and Ollie’s Candy in closest pursuit with Blue Prize and Midnight Bisou racing in seventh and eighth down the backside.

Approaching the far turn, Bravo and Blue Prize got the jump on the favorite and began reeling in horses and hit the top of the stretch making a four-wide move that got her to the front at the eighth pole. Midnight Bisou moved into second but never threatened the winner.

Fourth in the Longines Distaff last year at Churchill Downs, Blue Prize is a 6-year-old Argentine-bred daughter of Pure Prize out of the Not For Sale mare Blues for Sale (ARG). The victory was worth $1,100,000 and increased Blue Prize’s earnings to $2,692,253 with a record of 23-10-8-3. It is her third Grade 1 victory.