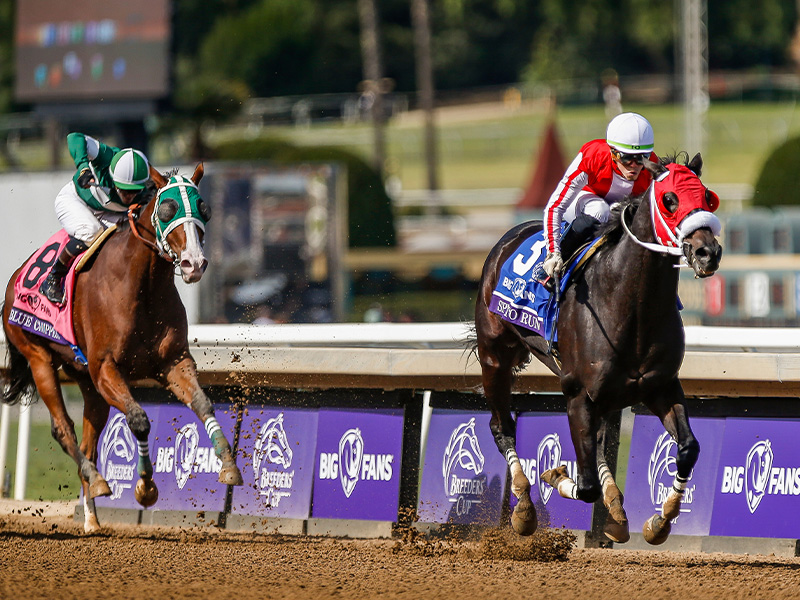 Winning trainer Juan Carlos Guerrero (Spun to Run) – “This is a dream come true for me, this means everything to me. Everything. Since the minute we got him he’s been a special horse to us. He’s so good about everything. He’s a colt, but he’s not mean. He loves to run. He’s a dream horse. When I put the full cup blinkers on him (before the Haskell, third), the next day he galloped so perfect I thought ‘wow, this is going to be a fun road with him.’ He was a different horse after I put the blinkers on. I really expected him to go wire-to-wire today. I just wanted my rider to let him run and show how he can run. A horse who can do what he can do, you’ve just got to let him run. This means so much to me. So much. It puts me at a different level as a trainer.”

Winning jockey Irad Ortiz Jr. (Spun to Run) – “I just followed the instructions. He told me to break running. I broke running, then I thought I broke too hard. On the turn, I knew I was going a little too fast so I tried to slow it down, but he didn’t want to come back to me for a little while. I had to keep it together. I held it as long as I could. He was drifting out a little in the turn and I had to let him pick up it up earlier than I wanted to. He just kept going.”

Second-place trainer Richard Mandella (favorite Omaha Beach) – “Very proud, very much so. Just had a little bad luck at the start. But, throughout this whole summer, if we didn’t have bad luck we wouldn’t have had any luck at all. You could see he didn’t get out of there running and in a good momentum. Mike (Smith) did the right thing, he let him get it together, didn’t try to rush him off his feet. And, he came on and ran a great race. The winner ran a great race also. In the Breeders’ Cup, you don’t get much second chances in these races. These are champions going in.

“We’ll let them (the owners) talk about that (possibility staying in training for next year). Right now, we’ll probably point to the Malibu Stakes the day after Christmas.”

Second-place jockey Mike Smith (favorite Omaha Beach) – “He had a bad break from the gate that probably cost us a couple of lengths.  As importantly, it also cost us position.  Then, I had to wait, wait, wait and kept losing position.  When he got clear at the three-eighths pole, the horse in front was long gone.  Hats off to the winner, but I think I rode the best horse today.”

Ryu Seungho Ho, representative of third-place trainer Kim Young-Kwan (Blue Chipper) – “That was a great job. We had really hoped at best to finish third and we did. We’re really, really pleased.”

Third-place jockey Flavien Prat (Blue Chipper) – “He ran a really good race. He broke well. We got a good early position. He was very brave to keep on going to get third. Entering the stretch, I thought I would definitely be among the first two, but he just got tired late.”