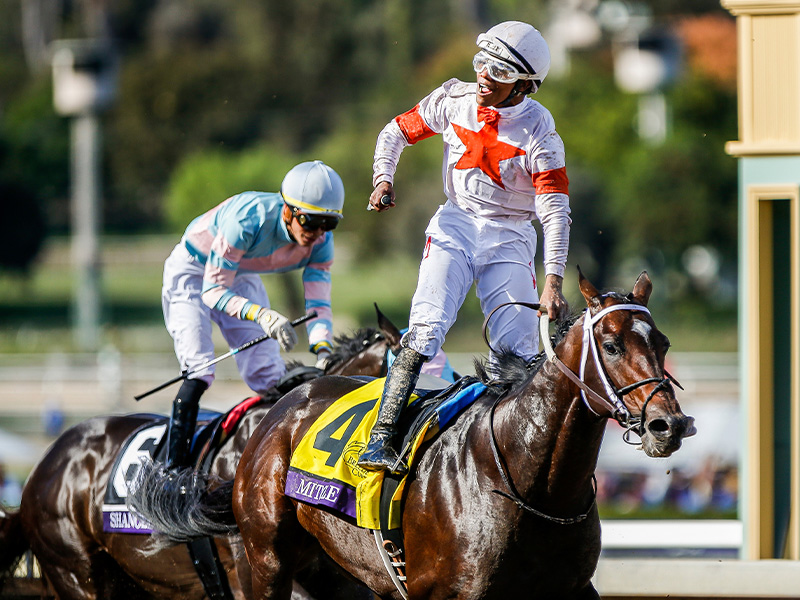 Winning trainer Steve Asmussen (Mitole) – “I think that he is so easy to be around, nothing but class and the ability he has is just tremendous. I don’t know that people realize from where he was in the spring to stretching out to beating the field that he did in the Met Mile, to retract from that and beat the best sprinters in the world and run in the Breeders’ Cup Sprint as opposed to the Mile, that’s twice as much money on his way out. But, it’s a very difficult job, one that a horse of his elite abilities is capable of doing.”

“When he broke well, I loved it. And, Ricardo (Santana Jr.) knows the horse and the confidence he has in him. We talked about just doing whatever was right for Mitole. We have no control over who does anything or where they do it, just be sure you’re happy with him and he’s happy with you and the rest will take care of itself.”

Winning jockey Ricardo Santana Jr. (Mitole) – “I had a lot of confidence in my horse. He’s a horse I’ve been riding since he was 2 ears old. I changed my mind today. A lot of people thought he’d go to the lead. I took him back and made one move and got to the wire first.”

Second-place trainer Jorge Navarro (Shancelot, beaten favorite) – “No complaints. Look at the horse who beat us. He’s the top sprinter in the nation, probably the world. To be second to him, guess what I have for next year, and by himself. It was fine. We’re good. I’m very proud of him. I feel like a winner. Look who he was running against. He’s had an amazing year for us and he’ll be by himself next year so we’re happy about that. This race was a big one for him. We’re going to do what’s best for the horse and there’s next year for him. I’m very proud of him.”

Second-place jockey Jose Ortiz (Shancelot, beaten favorite) – “He broke well and got to the lead pretty easily.  The fractions weren’t too fast.  When we turned for home he was still going strong and I thought we had a good chance to win, but we just got caught near the wire.  This is a very nice horse.”

Third-place trainer Ron Moquett (Whitmore) – “He tries hard. He’s a good horse. That’s the reason everyone loves him is he tries.”

Third-place jockey Flavien Prat (Whitmore) – “He ran a great race. He got a good trip and he made a nice move around the turn. He got beat by two really good horses. He fought to hold on and run third.”

Fifth-place trainer Jason Servis (Frienze Fire) – “He just ran a 106 and sometimes he doesn’t pair those big efforts. He was close. Irad (Ortiz Jr.) thought he maybe messed it up being too close to the speed, but you can’t ride like that. You just have to sit and make your run and whatever it is it is. They went 21 and three and my horse closed into that. When I saw that, I thought, well, he’s not going to punch. It’s all good. He ran a good race.”